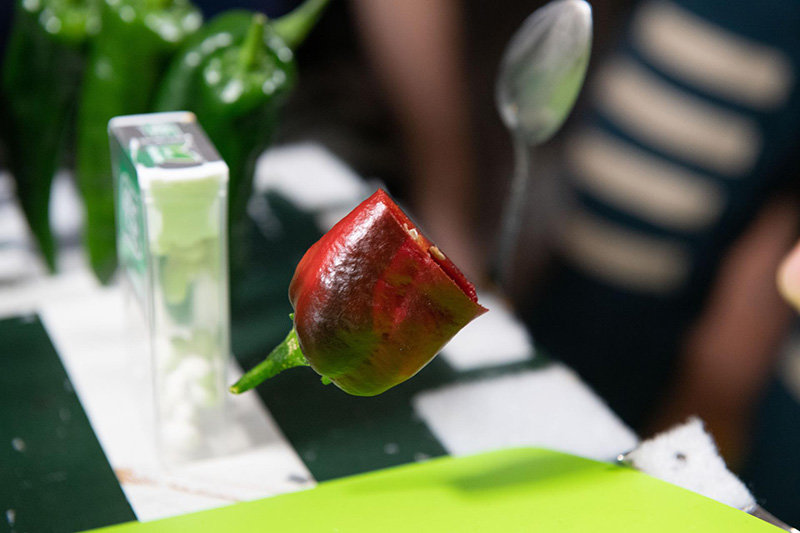 Did you know a chile cultivar developed at New Mexico State University is being grown aboard the International Space Station? The NuMex “Española Improved” pepper is part of NASA’s Plant Habitat-04 experiment, and NMSU graduates are among the researchers and scientists who helped chile find its way to space.

NuMex “Española Improved” is a hybridization between “Hatch Sandia” and the traditional Española Valley native type peppers of northern New Mexico and was developed in 1984 by Roy Nakayama, NMSU professor of horticulture and 1948 NMSU graduate, and Frank Matta, a 1968 and 1974 NMSU graduate and NMSU Cooperative Extension Service horticulturist and superintendent of NMSU’s Sustainable Agriculture Science Center at Alcalde, New Mexico. (Alcalde and Española are both located in Rio Arriba County.)

According to NASA, the chile pepper seeds started growing on the space station in mid-July and represent the longest and one of the most challenging plant experiments attempted aboard the orbiting laboratory.

Astronauts conducted the first harvest in late October and plan a second harvest in late November. Astronauts ate the first harvest and will return samples from the second harvest to Earth for analysis. The samples will be stored in a minus-80 degrees Celsius freezer until they are returned to NASA’s Kennedy Space Center for nutrient and capsaicin analysis. The experiments help inform future crop growth and food supplementation activities for deep-space exploration.

Matta said he was surprised and excited to learn about the experiments and understood why the NuMex “Española Improved” was selected.

“I never thought that NuMex ‘Española Improved’ would be in space or they would grow chile in space,” Matta said. “That was amazing.”

The NuMex “Española Improved” was the result of Nakayama and Matta seeing a need for a chile variety that could grow well in north-central New Mexico, which has a shorter growing season and produces fruit in a short period of time.

Española native Jacob Torres, who is a technical and horticultural scientist with Amentum at NASA’s Kennedy Space Center, is a member of the team that spent more than two years evaluating more than two dozen pepper varieties.

“At launch I felt good in the selection and the work we had done, and also had a lot of hope for them to succeed because they were a part of me and my home,” said Torres, a 2014 NMSU graduate.

“There was confidence that these peppers would grow as tested in the Advanced Plant Habitat, but you never know how a plant is going to grow in microgravity until you actually do it,” Torres said. “We were surprised at every turn with a great germination rate. We had some of the most beautiful flowers I’ve ever seen. Fruiting was delayed just a little bit, but when it happened, they looked beautiful. The peppers do not hang the way they do in the field; they grow at about 45-degree angle up, and that’s just the adaptation of the plants to the environment. Knowing how these peppers thrive in the varying environments and elevations in New Mexico, I felt confident that they would thrive without gravity, and what we learn may help people thrive here on Earth and as we explore space.”

“We’ve always known New Mexico chile is popular right here in our state, around the country and even worldwide,” Witte said. “Now we can be proud of its growing ability in space. It’s exciting that this experiment will add to NASA’s knowledge of growing crops for space missions.”