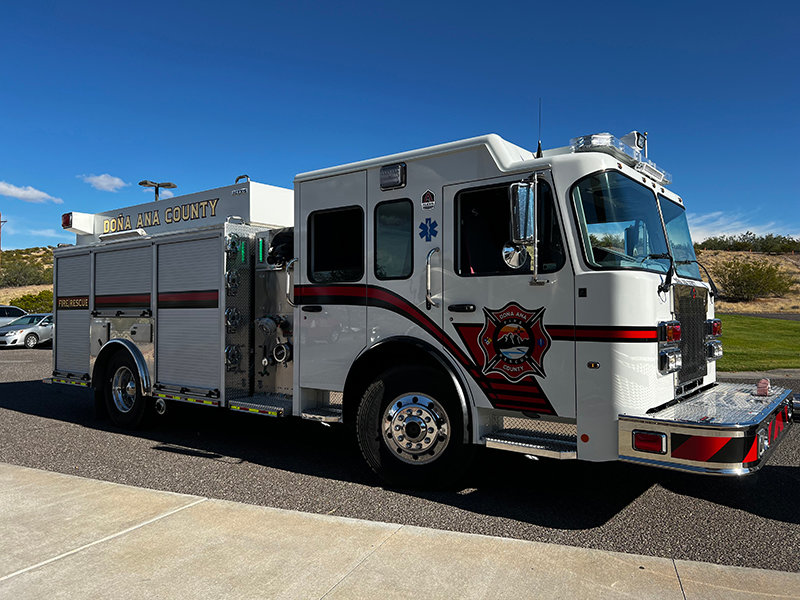 The New Mexico State University Fire Department will mark Fire Prevention Week with the arrival of a brand-new fire engine.  NMSU firefighters will unveil the 2022 Alexis Class A pumper during a public open house from 9 a.m. to 2 p.m. Friday, Oct. 14, at the NMSU Fire Department on the Las Cruces campus. The event will feature a customary “push-in” ceremony and activities to promote fire safety and engage with firefighters – 70% of whom are NMSU students. It is open to people of all ages.   The new engine, purchased through Doña Ana County’s fire excise tax, replaces a 2001 E1 fire apparatus that will be retired from service, said NMSU Fire Chief Johnny Carrillo.  “Our new engine can pump 1,500 gallons of water per minute and has all the necessary equipment to handle any number of emergencies, including a new set of extrication tools, emergency medical equipment, and fire hoses and nozzles,” Carrillo said. The “push-in” ceremony will begin a 10 a.m., during which firefighters will give the new engine its first wash and push it into the station at 1510 Wells St. “Our guys are excited and proud to have this new fire engine,” Carrillo said.  In late September, NMSU firefighters began to train with the new engine, which went into service on the Las Cruces campus in early October. “We’ve already received an in-service training to make sure we not only know how to safely drive it but also how to understand how to operate it in an emergency and operate all the bells and whistles and gages,” Carrillo said. The NMSU Fire Department is one of five fire stations in Doña Ana County that will receive new engines this year.  Like other fire stations in Doña Ana County, the NMSU Fire Department is funded by the state of New Mexico. Funding is based on fire suppression ratings set by the Insurance Service Office, which uses a 1-to-10 rating system (1 being the best) to rate fire stations’ capabilities in responding to emergencies. In 2018, the NMSU Fire Department received an ISO rating of 2. Each year, Carrillo said, the NMSU Fire department receives about 1,100 calls for service and primarily serves areas around the Las Cruces campus and Doña Ana Community College. The new engine will be used in roughly 90% of those calls, Carrillo added. In addition to unveiling the new fire engine, Friday’s open house will also feature Doña Ana County’s mobile fire prevention trailer, which will have hands-on fire safety demonstrations.  Fire Prevention Week, now in its 100th year, runs from Oct. 9 to Oct. 15. This year’s campaign – “Fire won’t wait. Plan your escape.” – aims to educate individuals about simple but critical actions they can take to keep themselves and those around them safe from home fires. For more information about the NMSU Fire Department, visit https://fire.nmsu.edu.