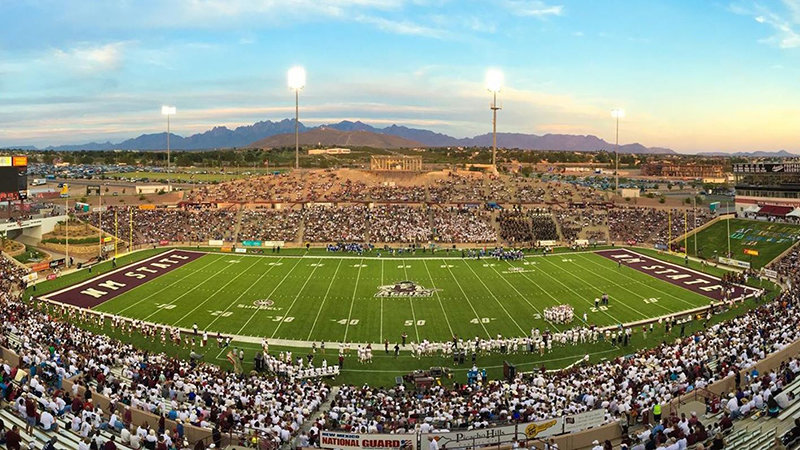 NM State’s department of athletics announced the return of the "Stuff The Stadium" promotion for the home opening football game vs. the University of Nevada Saturday, Aug. 27, to help ring in a new era of Aggie football under new head coach Jerry Kill.

The Stuff the Stadium promotion was last implemented for the home opener of the 2015 football season when 27,201 fans watched the Aggies take on Georgia State University.

Groups of 20 or more can purchase tickets in Aggie Memorial Stadium for just $5 or $10 dollars based on location. These ticket orders can be reserved now by calling the Pan American Center Box office at 575-646-1420 or emailing Patrick Kennedy, ticket manager, at patkenne@nmsu.edu and will be sent to purchasers at the beginning of August.

Tickets for the "Stuff The Stadium" event can be ordered and purchased at nmstatesports.com/documents/2022/6/20/StuffTheStadium_22.pdf. Any purchased tickets can also be donated to Las Cruces area youth through the NM State Athletic Department.

"With a home opening game on Week Zero against a good Mountain West Conference opponent in the University of Nevada, I couldn't imagine a better time to revitalize this promotion," said NMSU athletics director Mario Moccia. "Coach Kill, his staff, and our student-athletes have worked extremely hard to set a foundation for our football program that will begin at this game and we need to do everything we can as a department and a community to fill the stadium. In 2015, our business community stepped up and purchased a tremendous number of tickets that our athletic department made sure were used by service clubs, elementary school kids, and many other individuals that historically had not attended an Aggie football game. I am personally calling on all of Aggie Nation to accept this challenge and purchase tickets for this game to help us reach our goal. It is vital to our success and we need their help."

"I'm so excited to be playing our home opener here against Nevada and our kids are going to feed off of our crowd," Kill said. "We've got to sell this thing out, we need to make it exciting and loud. That will effect [Nevada] with what they do offensively. We need you here and we can't wait to show you what we have."

The Nevada contest will be the first of six home games throughout the 2022 season for the Aggies.  This is the first time since 2013 that the Aggies will play six games in Aggie Memorial Stadium. The remaining home slate will feature Hawai'i (Sept. 24), Florida International (Oct. 1), New Mexico (Oct. 15), San Jose State (Oct. 22 Homecoming), and Lamar (Nov. 12). To purchase season tickets, call the Pan American Ticket Office at 575-646-1420.

As Kill enters his first season with NM State, he brings 158 career wins, making him the eighth-winningest active football coach in the FBS ranks.