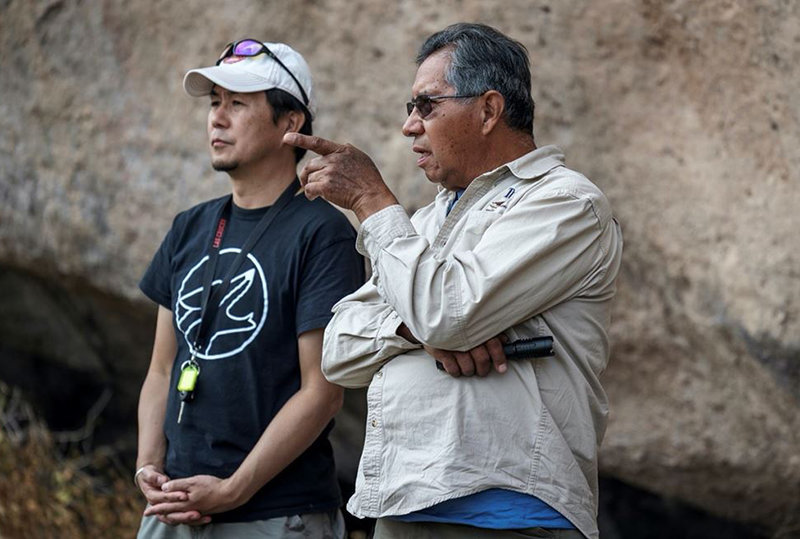 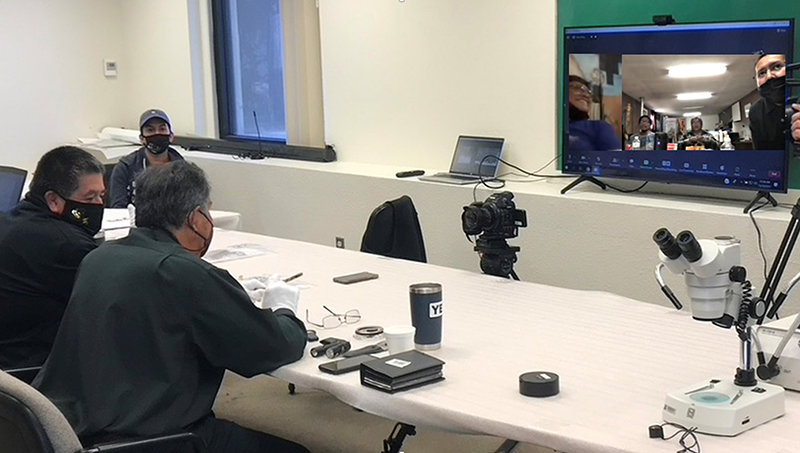 Zuni tribal elders review videos in which they discuss the meanings of artifacts found inside Chavez Cave.
Photo is courtesy of Fumi Arakawa, NMSU 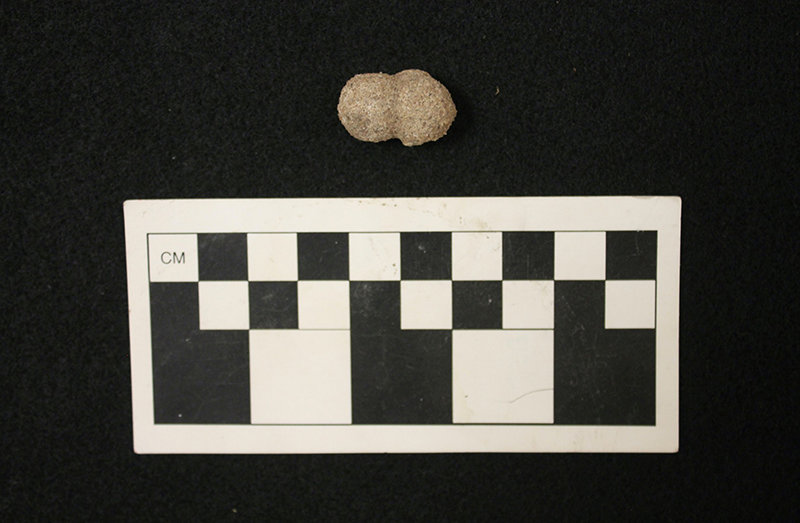 This artifact found by researchers in Chavez Cave, was mislabeled as a fishing weight. According to Zuni elders, it has a special meaning. It is among the artifacts that will be on display as part of the University Museum exhibition "Humanhood in the Organ Mountains: Prehistory."
Photo courtesy of Lindsey Cron and NMSU
Previous Next
Posted Thursday, September 15, 2022 1:20 pm
By Minerva Baumann

Thousands of years ago, the first inhabitants of this region left behind evidence of who they were, how they lived and what they believed in.

Today, researchers at New Mexico State University are wrapping these ancient artifacts in the knowledge and understanding of Native Americans to share with the community through an upcoming exhibition called "Humanhood in the Organ Mountains: Prehistory."

Members of the public are invited to see these artifacts and hear Zuni tribal members explain their meaning. The exhibition opens with a reception, 4:30-7 p.m. Friday, Sept. 16, at the University Museum in Kent Hall, 1280 E. University Ave., near the intersection of University and Solano Drive, on the NMSU campus.

The event, which is free and open to the public, will continue at the museum through August 2023.

Museum director and NMSU anthropology professor Fumi Arakawa has been thinking of the idea of this exhibition since he became the director in 2015.

"To be relevant and meaningful to the public regarding the prehistory of the Organ Mountains-Desert Peaks National Monument (OMDPNM), there are two important concepts – inclusiveness and multivocality," Arakawa said.

"Humanhood" aims to reveal the rich prehistory of southern New Mexico, emphasizing both concepts. Museum staff invited the Zuni Cultural Resources Advisory Team to visit two OMDPNM cave sites as well as to review hundreds of items from one of the sites, Chavez Cave.

"Inclusive means that history/prehistory matters to all people so that understanding and reconstructing the past needs to be integrated not only with one group of people but also others," Arakawa said. "Multivocality means that diverse perspectives and narratives are crucial for us to understand and reconstruct the past human behaviors. To explore the concept of multivocality in the upcoming exhibit, our museum staff attempt to integrate both scientific and humanistic perspectives. "

One aspect of the exhibition showcases narratives by six Zuni elders pertaining to the cultural landscape of Chavez Cave as well as strong feelings toward tangible objects recovered from the cave. Another part of the exhibit displays the current scientific research on ancient maize studies.

Arakawa, Rani Alexander and Kelly Jenks, anthropology professors, and Sarah Fuentes-Soriano, a professor in animal and range sciences, along with Donovan Baily, a biology professor, have been involved in the project and some of their findings are also shared and displayed in the exhibition.

As Arakawa's team reviewed the artifacts from Chavez Cave and learned more about them from tribal elders, it was clear not every piece could be put on display because some objects are sacred and culturally sensitive.

“Octavius Seowtewa, one of the Zuni elders, actually discussed that when he walked in, he felt a different feeling, a different aura or vibe in that cave,” said Robin Christofani, a senior anthropology student who is part of Arakawa's team.

One of the major lessons from this exercise was that approximately 70-80 percent of perishable objects reviewed by the Zuni elders were originally misclassified by archaeologists and/or museum people. The Zuni elders correctly identified these items as well as provided meaningful interpretations of each object based on their oral histories.