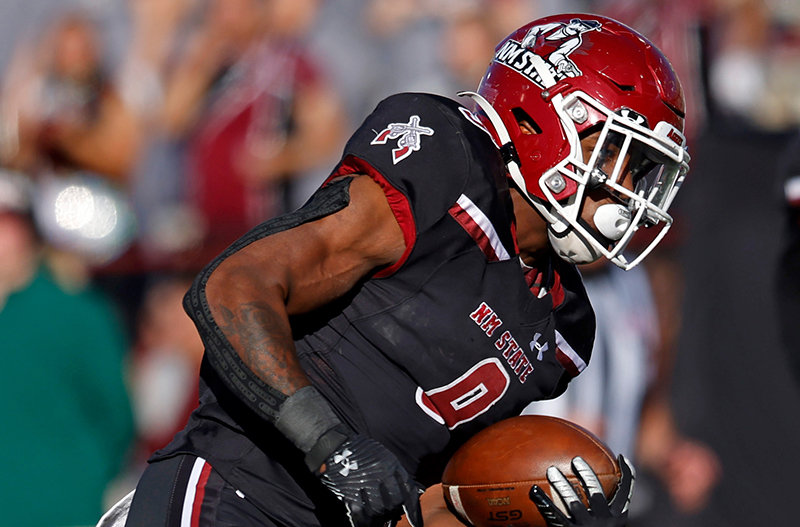 A redshirt freshman stole the show on senior day.

Juwaun Price carved up UMass' defense with a four-touchdown performance on the ground, Jonah Johnson threw for 420 yards and two more scores and the Aggies racked up 623 yards of total offense to earn a 44-27 victory over the Minutemen Saturday afternoon at Aggie Memorial Stadium.

Hoping to send its senior class out on a winning note, the Aggies wasted little time in lightning up the scoreboard. On the game's opening drive, the combination of Price on the ground and Isaiah Garcia-Castaneda through the air was lethal and handed the hosts a lead they wouldn't relinquish.

Jonah Johnson hit Garcia-Castaneda for a 40-yard strike on the fifth play of the drive which put the ball on UMass' 12-yard line. Price took over from there, needing just two plays to find the end zone for the first time which put the hosts ahead 7-0 only 2:54 into the showdown.

Both of the Minutemen's first-quarter drives resulted in punts, the final one of which pinned the Aggies back at their own eight yard line with 2:55 to go in the opening quarter. What followed was NM State's longest scoring drive of the 2021 campaign which spanned two quarters.

Johnson again made Price's ground prowess a part of the equation by finding Andre Bodison for a 47-yard connection just before the close of the quarter. With the ball at the Minutemen's 48, NM State kept driving an picked up a key third-down conversion when Johnson again spied Bodison - this time for a 20-yard gainer to put the Aggies in the red zone. The three plays that followed went for just eight yards, and the Aggies' fourth-down gamble on UMass' nine yard line worked as Price rumbled his way to pay dirt for a second time with 12:40 to go before halftime.

With the exception of NM State's final drive before half, each of the offensive expeditions the squads embarked on in the second quarter resulted in touchdowns. UMass cut into the Aggies' lead following NM State's second touchdown when Jared Chisari bounced a run outside and tiptoed the far sideline for a 30-yard scoring run which made matters 14-6.

A pass interference call on UMass started NM State's next drive and a wide-open Jared Wyatt ended it. The senior wide out was left all alone in the corner of the end zone and accepted a 20-yard touchdown toss from Johnson to push the Aggies' lead to 21-6.

The teams swapped rushing scores from there with Ellis Merriweather scampering for a 20-yard touchdown run before Price followed suit. NM State needed only three plays and 1:41 to make it a two-possession game once again. Following Merriweather's run that made things 21-13, Johnson hooked up with Justice Powers for a 34-yard strike before locating Bodison once again for a 17-yard pickup. Price finished off the quick drive with a 24-yard touchdown run which put the hosts' lead at 27-13 at the break.

UMass refused to go away, however, and used some big plays to draw closer at the end of the third quarter. The Minutemen went through the air for their third touchdown of the game as Garrett Dzuro lofted a 73-yard touchdown strike to Rico Arnold just 1:34 into the third.

Once again, Price was right where he needed to be for the Aggies to punch back. His career-best fourth touchdown run came from 26 yards out and made it a two-score game once again.

Merriweather, though, was't done for UMass. He accounted for all 95 yards - each one of which came on the ground - during his team's final scoring drive of the day. That drive was finished off with a 79-yard touchdown run by Merriweather that cut NM State's lead down to 34-27 with 2:01 to go in the third.

When they needed it to the most, NM State's defense stiffened. The Aggies got a 50-yard field goal from Ethan Albertson to start the fourth quarter which capped off a drive of 4:51.

NM State's defense let the Minutemen run only three plays on their next drive which resulted in a loss of four yards and another UMass punt. A seven-play, 81-yard drive culminating with a five-yard touchdown toss from Johnson to tight end Thomaz Whitford put the Aggies ahead 44-27 with 7:04 to go and UMass never scored again.

KEY PERFORMERS/STATISTICS OF NOTE
• Johnson wrapped up his final game of the season just five yards shy of his NM State career high in terms of passing yardage. He finished with 420 yards and two touchdowns by going 26-of-32.
• Wyatt went wild in his final collegiate game, going for 126 yards and a touchdown through the air.
• Price's punishing performance on the ground featured something not seen by an NM State running back since 2015. The Peoria, Ariz., product became the first Aggie to run for four touchdowns in a game since Larry Rose III did so in a wild 55-48 NM State victory over Idaho on Saturday, Oct. 31, 2015, inside Aggie Memorial Stadium.
• Albertson's 50-yard field goal make early in the fourth quarter represented his third-consecutive game with a make of exactly 50 yards. It also hiked his season total to 17 - tying NM State/US Bank Hall of Fame member Dat Ly for the highest single-season total in the history of the program.
• Topping the Aggies' defensive charts was Caleb Mills who came up with a game-high 10 stops (seven of which were of the solo variety). Chris Ojoh was a problem for UMass' offensive line all day long, too, as he finished with seven tackles including two tackles for loss.
• In all, six members of NM State's defensive unit registered tackles for loss while Trevor Brohard (seven tackles) posted the team's lone sack of the 2021 finale.
• Sage Doxtater, NM State's most well-tenured lineman, took part in his 51st game Saturday. He has now played in more games than any Aggie in program history.
• UMass showed off its ground game, too, as Merriweather pounded his way to 168 yards and a pair of touchdowns in the Minutemen's 2021 season-ender. In total, 281 of UMass' 405 yards came via the ground as Dzuro finished 12-of-23 with 124 yards and one touchdown under center.
• Saturday's victory proved to be both the final one of the Aggies' 2021 campaign as well as the final one for head coach Doug Martin. Following the conclusion of the contest, NM State Director of Athletics Mario Moccia announced Martin, who was in the final year of his contract, would not have his contract renewed.

COMING UP NEXT
• NM State will have a new leader of its football program when the Aggies take the field for the 2022 campaign. As stated by Moccia, NM State will move as quickly as possible in order to find the next head coach for its football team.