Quick start not enough, as Aggies fall to Utah State

The Aggies were up 10-0 after one, but were outscored 35-3 over the final three periods 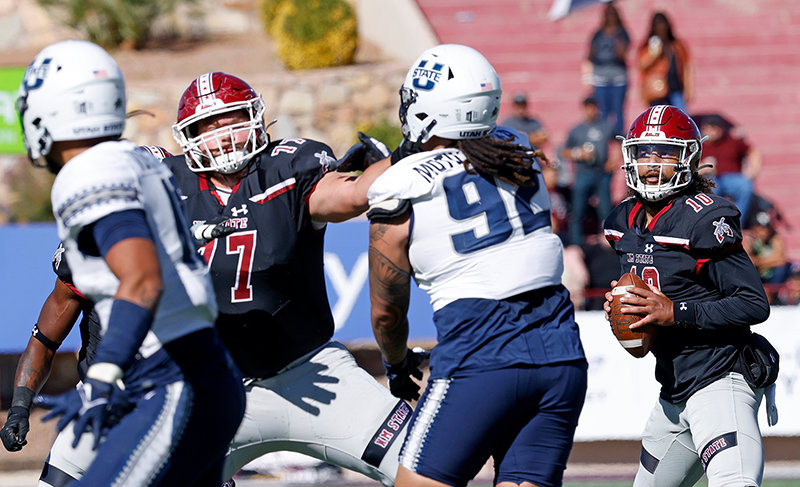 In the setback, QB Jonah Johnson completed 30-of-44 passes for 298 yards. For just the second time this season, Johnson failed to record a touchdown.

The lone NM State (1-7) touchdown came with 4:46 to go in the first, when Juwaun Price rushed in from 11 yards out. The score was Price's sixth of the season and third in two weeks.

Defensively, the Aggies of NM State, held Utah State (7-2) to just one first down in the opening quarter and to just 106 yards of total offense in the opening 30 minutes.

After completing 9-of-11 passes for 105 yards in the opening period, Johnson was limited to just 193 yards over the final three quarters of play.

HOW IT HAPPENED:
The Aggies started quickly Saturday taking the opening drive deep into USU territory. The drive featured multiple big plays including a 17-yard connection from Johnson to WR Cole Harrity. Harrity finished Saturday's contest with a career-high nine catches for 83 yards (also a career-high).

After a 15-yard strike from Johnson to tight end Thomaz Whitford marched the Aggies to the Utah State 12, the drive ultimately stalled at the USU eight, bringing out Ethan Albertson for a  25-yard attempt that was blocked.

After a quick three-and-out by the Aggie defense, the NM State offense authored the lone touchdown drive of the contest.

The seven-play drive drive featured four long Johnson runs (11 yards, 11 yards, 13 yards and 13 yards) and a 15-yard connection from Johnson to Wyatt that set up the 11-yard Price score. Wyatt finished the game with four catches for 59 yards, while Johnson ran for 69 net-yards (10 total due to sacks).

With possession of the ball at his own 35-yardline, Johnson marched his unit inside the USU 30, before the drive ended in a 45-yard Albertson field goal that gave the Aggies a 10-0 lead with 61 ticks to play in the opening quarter. The kick was the longest of Albertson's career.

For the first time all game, Utah State orchestrated a drive that advanced past midfield, as Logan Bonner led his offense to the NM State 13 before facing a fourth and a long five. After an offsides penalty on the Aggies set up fourth and less than a yard situation, Lama Lavea stuffed USU running back Calvin Tyler Jr for no gain.

The stop gave the Aggie offense possession of the football again.

On the ensuing drive, the Aggie offense went backwards, as punter Josh Carlson booted a strong 46 yard punt that would have given Utah State the ball at the NM State 48. On the play, the Aggies were whistled for kick-catch interference. As a result, Utah State opened its fourth drive of the contest at the NM State 33.

The penalty was all the dangerous USU offense needed to get going, as Bonner found Deven Thompkins in the back of the endzone for a 26-yard score that cut the NM State lead to 10-7 with 10:06 to play in the second period.

The connection was one of two touchdowns that Bonner and Thompson would combine for as the QB ended up completing 23-of-32 passes for 359 and four scores, while Thompson ended up with 9 catches for 215 yards and the two scores.

For the third time in five drives, Johnson and the Aggies marched deep into Utah State territory, as the QB authored a 14-play, 58-yard drive that stalled on fourth and five from the USU 17. Albertson's number was again called, as the kicker hit from 35 to give NM State a 13-7 lead with 4:10 to play.

The field goal was the final score for either side, as NM State went into the break with a 13-7 lead.

Taking possession of the opening kickoff of the second half, Bonner and Utah State capped a four-play drive with a 54 yard strike to Thompkins that gave the visitors a 14-13 lead just 58 seconds into the third period.

NM State managed two 10-plus play drives in the second period, advancing the USU seven and 21 respectively, but both drives ended in a turnover on downs.

COACH SPEAK (HC DOUG MARTIN):
"For a half tonight we played like our guys are capable of playing. In the locker room we talked about needing to do it for a complete 60 minutes, and tonight we didn't. It comes down to our practice habits and learning how to play a full game. But our kids played hard and they're really trying hard. We settled for too many field goals on offense and then didn't score in the second half. And then defensively, we just needed didn't execute anything well in the second half. And then we struggled on the offensive line, as pass protection all day was a problem. But again, we made a lot of plays and played a great first half. We just have to learn to finish it."

On the Aggies 13 penalties:
"Penalties really killed us too. We had a lot of offsides on defense because we weren't' watching the ball. And then our offensive line didn't play well at all. The penalties were a major factor. When you're in third and long against a good defensive team it's hard to convert. On the flip side when you keep putting them in third and short situations it's going to cause problems too. A lot of the penalties were mental errors. "

On whether the team was ready to play and the week of practice:
"We really could not play much better than that in the first half on both sides. There's a talent gap with us right now and other teams. And that's obvious. You've got to be able to get players here that can compete for 60 minutes. Our guys wear out after a while, both mentally and physically. That's part of recruiting and part of finding a way to build program again."

WR Cole Harrity:
"We did a really good job of executing in the first half. We threw the ball well and were getting open. And then we had good protection up front. I don't know what happened in the second half other than we shot ourselves in the foot. It's frustrating but hopefully we can learn from this. In the second half they started playing more man coverage and two-high safety looks. They switched the defense around which was a struggle for us to adjust to."

WR Terrell Warner:
"We missed some opportunities, especially early that we needed to take advantage of.  We had the lead at halftime which was big time, but we have to finish. The other 30 minutes are so important. We always talk about the second half and how important it is. We need to find ways to continue to make plays and be consistent."

UP NEXT:
The Aggies open a two-game road swing at No. 3 Alabama next Saturday. Kickoff from Bryant-Denny Stadium is set for 10 a.m. (MT) on SEC Network.