BEYOND THE PRESS BOX 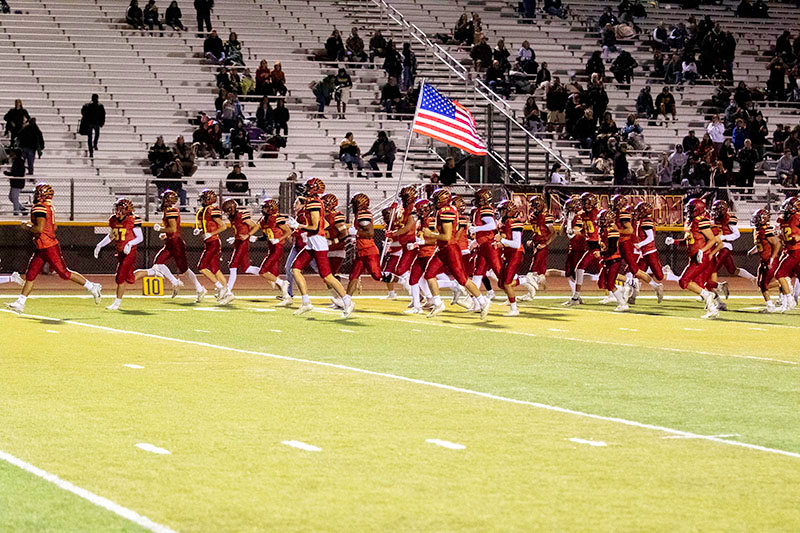 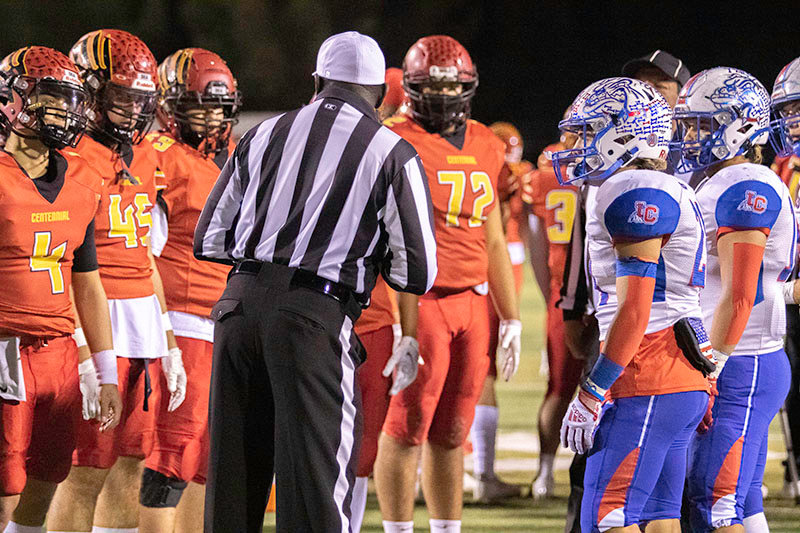 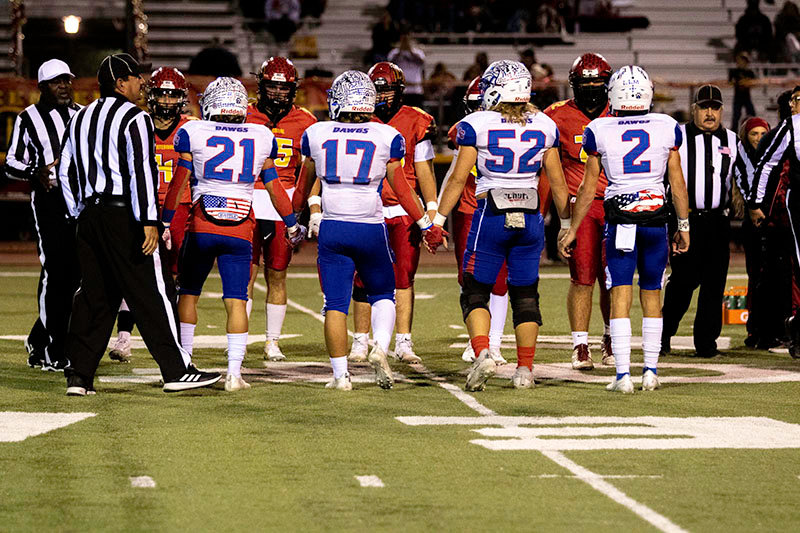 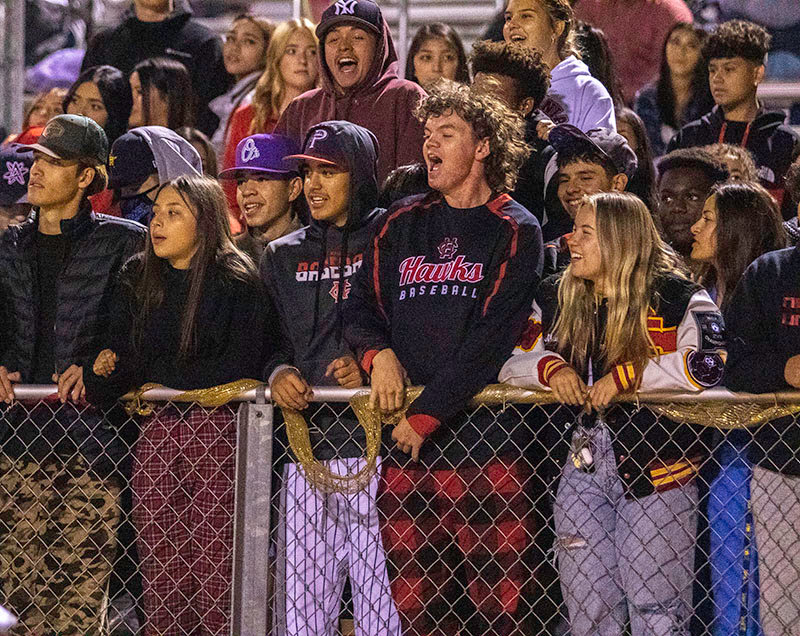 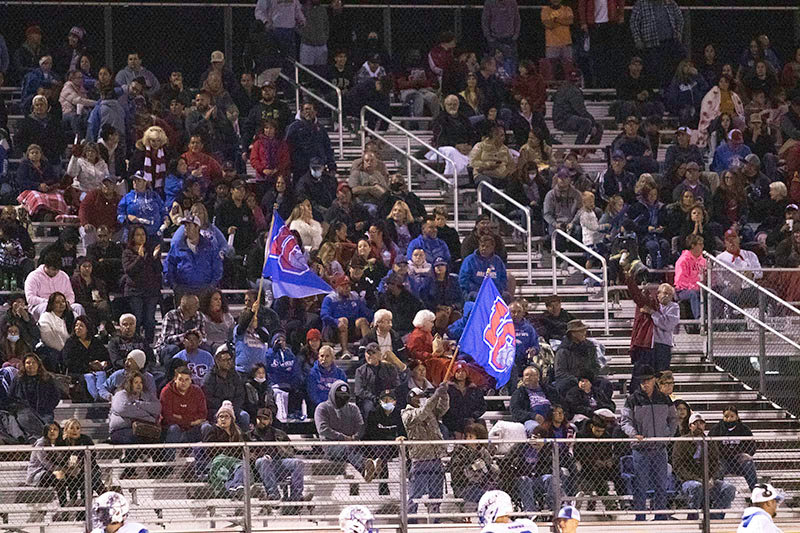 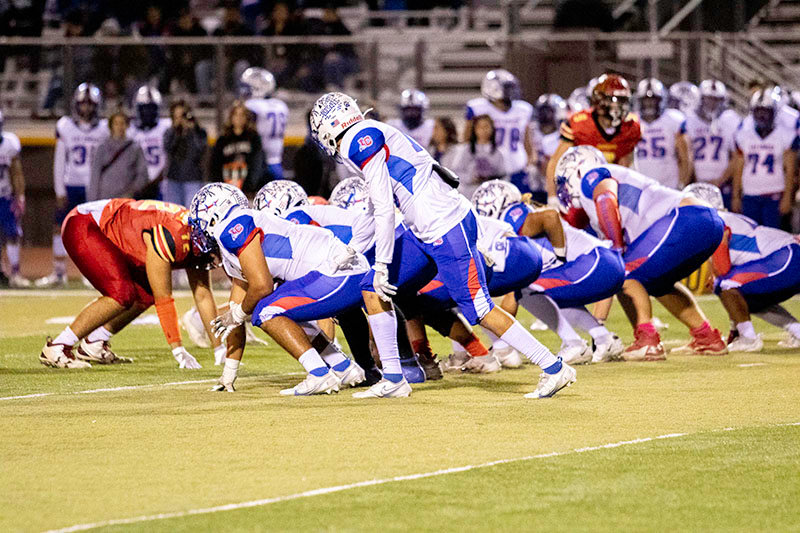 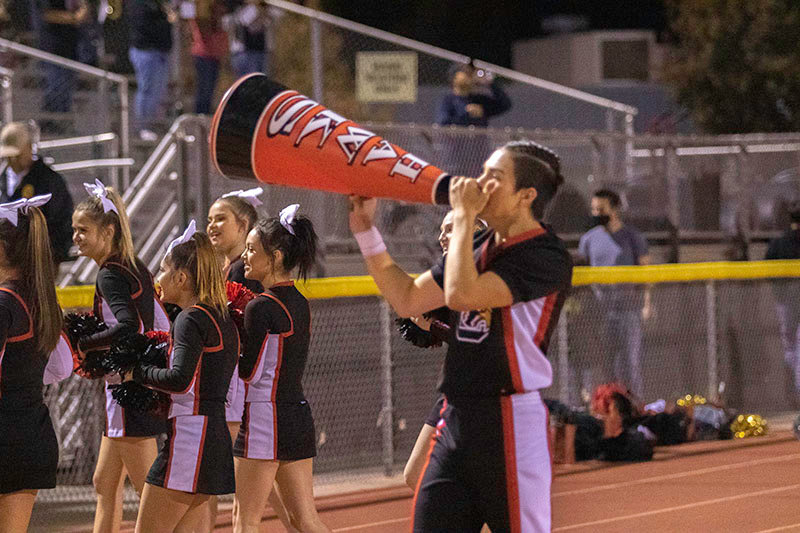 The rematch of Las Cruces vs. Centennial shows it has the passion and emotion to become an important rivalry.
Photos by Tabitha Rossman
Previous Next
Posted Tuesday, November 16, 2021 11:46 am
By Dave Burge

The Las Cruces High School football team won the rematch against Centennial High and earned the right to play another week in the New Mexico state playoffs.

And maybe, we are seeing the beginning of another great cross-city rivalry.

Friday night, Nov. 12, the Bulldawgs used a gritty defense and grind-it-out, ball-control offense to secure a 35-21 win over Centennial in the quarterfinals of the state 6A playoffs on a chilly night at the Field of Dreams.

Earlier in the year, Centennial overcame a 27-point deficit in the second half to beat Las Cruces 42-41. That win gave Centennial the district championship and a first-round bye in the state playoffs.

It also knocked Las Cruces into second place in the district and sent the team home with broken hearts – at least temporarily.

That loss “probably made it (this win) a lot sweeter, to be honest,” Las Cruces head coach Mark Lopez said. “That was a heartbreaker that first time. I mean everybody’s hearts were broken – family, us (the coaches), kids. To get a second chance like this, you don’t get this very often in the same season, a chance to redeem yourself.

With about 10 minutes left in the game, Las Cruces stopped Centennial on fourth down near the goal line and then proceeded to use its ground attack to take about eight minutes of time off the game clock to secure the win.

“You have be able to do that,” Lopez said. “You look at the history of our program and I’ve been here for a minute. We have done that so many times. Milk that clock and keep getting first down after first down. It’s a huge credit to our O line. They keep doing such a great job for us.”

For Centennial, it was a heartbreaking (again, that dreaded adjective, which keeps on coming up this time of year) way to end a stellar season.

“I feel we had a great season,” Centennial coach Aaron Ocampo said. “We were district champs. We were city champs until we lost tonight. They are advancing in the playoffs and we aren’t. We had a great record, 8-2. I’m really, really proud of these kids.”

When asked if this year could be a building block for future success, Ocampo said they were focused on the “here and now.”

“State championships are awesome and that is our goal and everything, but right now for Cruces schools, it’s kind of a challenge,” Ocampo said. “Our enrollments are a lot smaller than the Clevelands and Rio Ranchos, so it is kind of a challenge to have the depth. I think us and Cruces have shown we can beat those teams.

“It is just a matter of having that great season. We have a lot of kids returning and I expect us to have a really good year next year,” Ocampo said.

Ocampo said that he believes Centennial vs. Las Cruces is now the biggest rivalry in the city.

“You can ask the kids,” he said. “Obviously, Mayfield and Cruces has gone way back. I think this rivalry is the biggest in town right now, because it means a lot when it comes down to the end of the season. It seems like we are always playing for the district championship every year. I think it means a lot.”

Lopez said he didn’t know how many rivalries you can have, but said Centennial vs. Las Cruces definitely pits two strong programs against each other.

“The rivalry stuff I don’t know,” Lopez said. “But I do know it is two great programs with a lot of great kids on both sides.”

Now, fifth-seeded Las Cruces, 7-4 overall, will turn its attention to the semifinal round of the state playoffs. The Bulldawgs will get to host No. 1 seeded Cleveland of Rio Rancho, 11-0, at 7 p.m. Friday, Nov. 19, at the Field of Dreams. Tickets are available online at

In the state 5A playoffs, Mayfield saw its season end with a 35-21 loss to Artesia in the quarterfinals on Saturday, Nov. 13. Mayfield finished the year at 7-5.