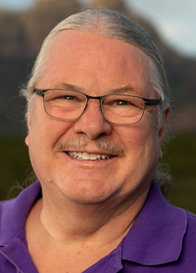 Bob Wofford
Photo is from https://bobwoffordforlcps.com/
Posted Thursday, September 30, 2021 12:04 am
By Mike Cook

A retired teacher is seeking to replace a longtime incumbent on the Las Cruces Public Schools Board of Education.

Bob Wofford, a Las Cruces native, retired in 2017 after teaching English at Las Cruces High School for 34 years. He is a candidate for the District 3 seat on the LCPS school board, hoping to succeed Maria Flores. Flores, first elected in 2009, is not seeking re-election to a fourth four-year term on the board.

Although he has been retired from teaching for four years, “I still have more to give,” Wofford said, and that’s why he decided to make his first bid for elective office and run for school board.

“I feel like I can still make a difference in the lives of students,” Wofford said. “I’m very dedicated to education. It’s been my life focus.”

As a board member, Wofford said he will be “an advocate for teachers, who are the linchpin for student success.”

In particular, Wofford said he wants to focus more on teacher retention and more support for new teachers.

“Too many get frustrated and leave in the first year,” he said.

Although he has an administrative license, Wofford said he never wanted to give up teaching to become a school administrator.

“My passion was in the classroom with students,” he said.

That commitment will continue if he is elected to the school board, Wofford said.

“Students have to be the central focus,” he said. “That is my primary work. Certainly, we need to support our educators and also involve parents and the community.”

Board members also must have “a vision for budgeting and school policy,” Wofford said.

“LCPS has a very large budget with much of it prioritized into salaries and benefits, but each dollar spent on any line item in the budget needs to be clearly necessary and should match the priorities established by the board,” Wofford said on his campaign website.

“School boards have become contentious, which is too bad, because you need to keep the focus on students and schools,” he said, and “help our students see their places in the larger community.”

As a school board member, Wofford said he will be an advocate for “building consensus, listening to people and trying to heal any divisiveness. The school board should not be a political entity,” he said.

Ensuring that children learn to read early in elementary school is important for student success, Wofford said, and so is “making sure students are welcome at school and succeed in finding their niche.”

Sports and school clubs and organizations are important for students, Wofford said, and can make the different “in terms of student retention and increasing graduation rates,” he said.

Career and technical education programs are “greatly needed in our schools, so that students see a connection between their academic classes and their careers,” Wofford said on his website.

These programs, along with dual-credit classes “open doors to students,” he said.

“We need to encourage innovation, involvement, and community partnerships to help engage our students,” Wofford said.

It’s important, he said, that not too much emphasis be given to test scores.

“You cannot account for the whole of the student through a single test score,” he said.

Wofford said he had known and worked with LCPS Superintendent Karen Trujillo for many years. Her death in February “was a profound loss for our district,” he said.

“I look forward to working with Mr. Ramos,” who succeeded Trujillo as superintendent, Wofford said.

Hiring and guiding superintendents is “absolutely critical” for school boards, Wofford said.
“A good school board provides the vision for which way the schools go,” he said.

Wofford taught Advanced Placement (AP) English for more than 25 years at LCHS, and has more than 15 years of experience as a consultant for The College Board, a national nonprofit educational membership association. He has a master of arts degree in English and a bachelor of arts degree in education, both from New Mexico State University.