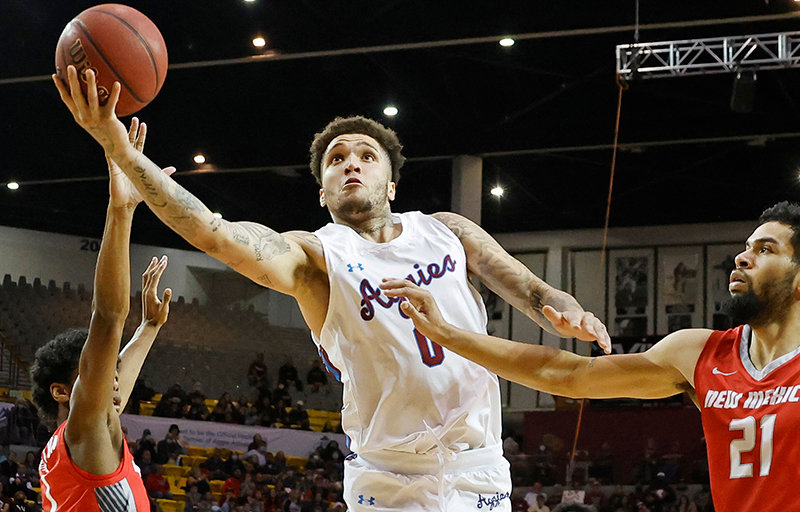 THE OPENING TIP
• For the sixth time in the last nine seasons, the NM State men's basketball team is hoping to secure a season sweep of one of its biggest rivals. The Aggies head to the Don Haskins Center in El Paso, Texas, for a Friday evening showdown with UTEP. Tip-off is set for 6:00 p.m. MT.
• Fans unable to attend the 220th meeting between the Aggies and Miners can catch all the action on Stadium, the Stadium apps, watchstadium.com/live and free streaming platforms (XUMO, TUBI, Roku Channel, STIRR and Twitch). Noah Coslov and Tim Scraborough will be on the call.
• Over the airwaves, legendary radio play-by-play man Jack Nixon will set up shop courtside to call the action.
• Nixon's play-by-play and analysis can be heard on 99.5 Zia Country FM in Las Cruces, N.M., and nationwide on The Varsity Network app.
• Affiliate stations of the Aggie Sports Network can be tuned in to in Artesia, N.M. (990 AM), Carlsbad, N.M. (1240 AM), Gallup, N.M. (94.9 FM), Alamogordo, N.M. (103.7 FM) and El Paso, Texas (1380 AM). All of those stations will also carry Nixon's commentary of Friday night's tilt.

NM STATE vs. UTEP | SERIES HISTORY & TIDBITS
• The second-lengthiest series in the history of the program behind their one against in-state rival New Mexico, the Aggies have battled UTEP 219 times dating back to 1915 with the Aggies owning a 117-102 all-time mark against the Miners. On November 12, 2019, the Aggies saw their nine-game winning streak against the Miners get snapped after UTEP claimed a 65-50 victory inside the Don Hawkins Center.
• Only two events - World War II and the COVID-19 pandemic - have prevented NM State and UTEP from meeting on annual basis since 1923. By failing to play last season, it marked the first time since 1944 in which the Aggies and Miners didn't duke it out on the hardwood.
• The Aggies' longest winning streak in the all-time series came between 1932 and 1940 when they won 20-straight over UTEP.
• NM State's nine-game winning streak headed into the 2019-20 campaign was its third-longest in the history of the series and heading into Friday's tilt the Aggies have won nine of the last 10 and 14 of the last 16 matchups between the two programs. Three of the Aggies' last 10 wins have come by 20 points or more.
• NM State bench boss Chris Jans is 6-1 (.857) against UTEP during his tenure in Las Cruces.
• The Miners are just one of a multitude of current Conference USA squads the Aggies have done battle with in the history of men's basketball at NM State. All-time, the Aggies hold a 173-133 (.565) winning percentage against current C-USA programs and are above the .500 mark against each team from that league they have played with the exception of Charlotte (0-1) and Southern Miss (1-9).
• A little over 10-percent (10.7-percent) of NM State's 1,622 program wins have come at the hands of current C-USA institutions.

FAST BREAK POINTS
• NM State head coach Chris Jans has missed the Aggies' last two games due to COVID-19 protocol.
• Oddly enough, NM State head coach Chris Jans has a better record in the Don Haskins Center than UTEP head coach Joe Golding does. Golding, who is in his first season as UTEP's head coach, possesses a 3-1 (.750) record in the Miners' home facility while Jans is 4-1 (.800) inside that same location.
• Last season, NM State played a pair of games inside the Don Haskins Center after not being able to play any games in the state of New Mexico due to in-state COVID-19 restrictions.
• Teddy Allen's 31-point outburst Tuesday night in the Aggies' setback to New Mexico was the first 30+ point performance by an Aggie since 2018. AJ Harris was the last NM State player to drop 30 or more points, putting in 33 in a 98-94 victory at New Mexico on Nov. 17, 2018.
• NM State is looking to bounce back from its second loss of the season and fortunately for the Aggies consecutive losses have been somewhat of a rarity during Chris Jans' tenure as head coach. The Aggies are 22-4 (.846) in games directly after a loss during Jans' tenure. Jans' teams at NM State have had just two losing streaks - one of two games in 2017-18 and another of three games in 2020-21.
• In Tuesday night's loss at New Mexico, the Aggies gave up 100 or more points to the opposition for the first time in the Chris Jans coaching era. Before Tuesday, the last time NM State let a foe hit the century mark came in 2017 when it claimed a 107-101 WAC win at UTRGV on Feb. 18. Since 2010, only three NM State opponents (Nevada, New Mexico and UTRGV) have amassed 100 or more points in a game.
• Now in his fifth season in an NM State uniform, Johnny McCants has broken into the program's top-ten leaders in blocked shots. McCants, a Las Cruces, N.M., product has 87 rejections to his credit as a collegian which are the 10th-most all-time by any Aggie.
• Allen is the only Aggie who has scored 10 or more points in each of the team's seven games this season. The team's leading scorer at 18.0 points per game, Allen has also hit 90.9-percent of his free throws. That percentage leads the WAC and ranks 36th in the nation.

LAST TIME OUT | New Mexico 101 at NM State 94 | Tuesday, Nov. 30, 2021
• A power outage of nearly 50 minutes inside the Pan American Center during the game's first media timeout didn't affect the offenses for either team, but in the end it was New Mexico who came away with a 101-94 win Tuesday night.
• In the Aggies third-straight loss to the Lobos, NM State saw their longtime in-state rivals amass over one-third of their points from the free throw line in a contest which featured a total of 77 attempts from that distance.
• Teddy Allen and Jabari Rice did all they could to keep the Aggies within striking distance all night. That pair of NM State backcourt players combined for 52 of the team's 94 points (55.3-percent) with Allen generating a season and game-high 31 points on an 8-of-16 effort from the field.
• Allen and Rice went a combined 21-of-23 from the free throw stripe and became the first Aggie duo to combine for 50 or more points against New Mexico since AJ Harris (31) and Terrell Brown (20) did so in a 98-94 NM State win in Albuquerque back on Nov. 17, 2018.
• Will McNair dropped in a career-high 14 points on 6-of-10 shooting while adding aeight rebounds. Allen's rebounding total of nine matched his career-high and represented the highest total by an Aggie Tuesday night.
• Jaelen House matched Allen with a 31-point performance to lead New Mexico. Jay Allen-Tovar came off the bench for the Lobos and turned in a 15-point, 11-rebound double-double.
• NM State head coach Chris Jans missed his second-straight game due to COVID-19 protocols. His record against New Mexico slipped to 4-3 after Tuesday's result.

LAST TIME OUT vs. UTEP | NM State 77, UTEP 71 | Saturday, Nov. 13, 2021
• In the first matchup between the longtime borderland rivals in nearly two full years, NM State used a key 21-9 run over a span of nearly six minutes in the second half to earn a 77-71 victory over UTEP inside the Pan American Center.
• NM State's second-straight victory over the Miners was fueled by a quartet of Aggies who finished with 10 or more points. Jabari Rice scored 12 of his team-high 15 points in the second half while Teddy Allen and Yuat Alok contributed 13 apiece.
• Donnie Tillman finished two rebounds shy of a double-double, going for 12 points and eight rebounds. Staying in the frontcourt, Johnny McCants added six points as well as a game-high nine rebounds.
• Virshon Cotton made his NM State debut during the team's triumph over UTEP. The LIU transfer contributed five points - all from the free throw line - as well as one assist in eight minutes of action.
• Teddy Allen's second - and final - three-pointer of the game hiked the Aggies' lead to 70-51 with 7:38 to go. The Miners, however, finished the game on a 20-7 run after that while limiting the Aggies to just a single field goal make. Souley Boum poured in a game-high 23 points for the Miners off the bench in his 2021-22 debut.
• The victory made NM State 9-1 in its last 10 matchups with the Miners and 14-2 in its last 16 tilts against them.
• For head coach Chris Jans, he hiked his all-time record against the Miners to 6-1 thanks to the victory.
• NM State moved its 2021-22 record to 2-0 with the victory, marking the third time in head coach Chris Jans' tenure that the Aggies started a season with back-to-back wins.

SCOUTING UTEP | ROSTER | SCHEDULE | STATISTICS
• After suffering their first loss of the season to NM State back on Nov. 13, the Miners have won three of their last four games as they prepare to host the Aggies to wrap up a three-game home stand. Two of the Miners' four victories this season have come against non-NCAA Division I foes (Northern New Mexico and Western New Mexico).
• In order to try and win their second-straight game against NM State at the Don Haskins Center, the Miners will likely be relying on the high-scoring play of guard Souley Boum. It has been a tough start to the 2021-22 campaign for Boum who made his season debut against the Aggies back in mid-November after suffering a broken finger in preseason workouts. After playing in three consecutive games, Boum missed the Miners' last two tilts due to COVID-19 protocols but is expected to be in the lineup Friday night.
• Boum's 20.7 points per game lead the Miners while Jamal Bieniemy has continued his strong start to the campaign as well. The junior guard out of New Orleans, La., has finished with 11 or more points in each of the Miners' six games to rank second behind Boum in scoring at 16.8 points per game.
• While Bieniemy and Boum lead UTEP's offense, the team's defense is an all-hands-on-deck unit which stands among the best in the nation at preventing opponents from putting the ball in the basket. The Miners rank eighth nationally in turnovers forced (19.83 per game), 30th in steals per game (9.8) and 36th in scoring defense (59.3 opponent points per game).

THIS DATE IN NM STATE HISTORY
• Nearly half of the 28 games NM State has taken part in on Dec. 3 have been against longtime rivals UTEP and New Mexico. NM State is 14-14 all-time on this date.
• All-time on this date, the Aggies are 2-2 against UTEP on this date and 3-4 against the Lobos.
• The last time NM State and UTEP crossed paths on this date, the Aggies earned a hard-fought 59-56 win at home in 2019.
• NM State has won its last three games on Dec. 3. Head coach Chris Jans is a perfect 2-0 on this date as the Aggies' bench boss.
• In 1983, the fifth-largest crowd in the history of the Pan American Center filed in to watch NM State drop a narrow 60-59 decision to Texas rival UTEP.
• Three of the 25 largest crowds in the history of the Pan American Center were inside the facility on this date. The opponent in two of those games was UTEP.

COMING UP NEXT
• Not only does Friday night's matchup with the Miners in El Paso, Texas, represent the second in three consecutive rivalry games for the Aggies, it's also the starting point of a five-game stretch of true road games. NM State continues its road trip through the first half of the month of December by heading north to Albuquerque, N.M., for a Monday night battle with New Mexico. Tip-off in The Pit that night is set for 7:00 p.m.