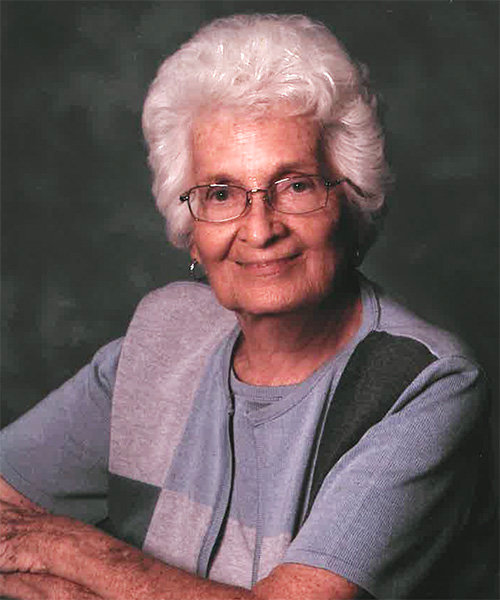 Sammie J. Edwards (Lowe), 89, passed away at home on September 17, 2021, in Las Cruces, NM. Sammie was born on February 5, 1932, to Virgil Horace Lowe and Linnie Pearl Lowe (Williams) in Tipton, OK. Sammie graduated from Crosbyton High School in Crosbyton, Texas, in 1950 and married David Terry Edwards on June 24 of that same year. They had two children – David Terry, Jr. and Lea Anna. The family moved to Clovis, NM, in 1960 as Terry began his career in Scouting and Sammie worked at a local bank. Scouting took them to Las Cruces in 1965, and Sammie began working at the Las Cruces Public Schools in the payroll department. She continued in this position for 27 years until her retirement. Sammie and Terry were lifelong members of the (United) Methodist Church where she was a member of the Miriam Circle and volunteered to address and send out birthday cards to congregation members. She occupied herself with a variety of handicrafts and “artsy” pursuits including calligraphy, painting, needlework, and jewelry making. She became an expert at gift wrapping. Her last crafts project in 2021 was completing uniquely decorated Christmas stockings for each of her grandchildren and great-grandchildren with the invaluable help of part-time companion Camille Brown.

Sammie doted on her grandchildren, Danny Chandler, who lived with and cared for Sammie, Zia Chandler, and Jordan Edwards, and she was especially proud of being a great grandmother to Connor David, Taylor Greer, and Lou Darling.

She was preceded in death by her husband, Terry, and by seven siblings. She is survived by son David and his wife, Cindy Murrell, daughter Lea Anna, three grandchildren, and three great-grandchildren. She is also survived by one sister, Jane Parker of Crosbyton, sister-in-law Bonnie Griffin of Idalou, Texas, and sister-in-law Laura Dickinson of Vacaville, California, and numerous adoring nephews and nieces, as well as step-grandchildren and step-greatgrandchildren

Sammie passed away peacefully at home under the loving care of the wonderful staff at Mesilla Valley Hospice, and memorial gifts may be made in Sammie’s honor to that organization. Cremation has taken place at La Paz-Graham Funeral Home, and the family wishes to express their gratitude to their professional and caring staff. A memorial/graveside service will take place at a later date with interment at the Crosbyton Cemetery.