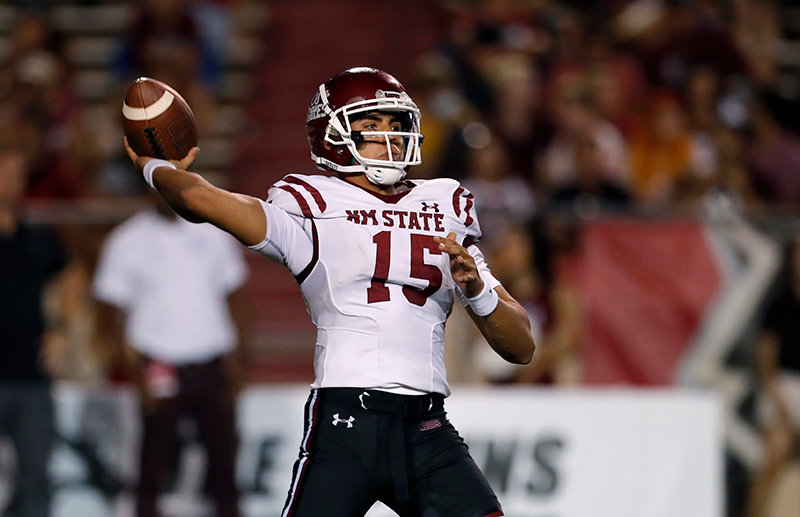 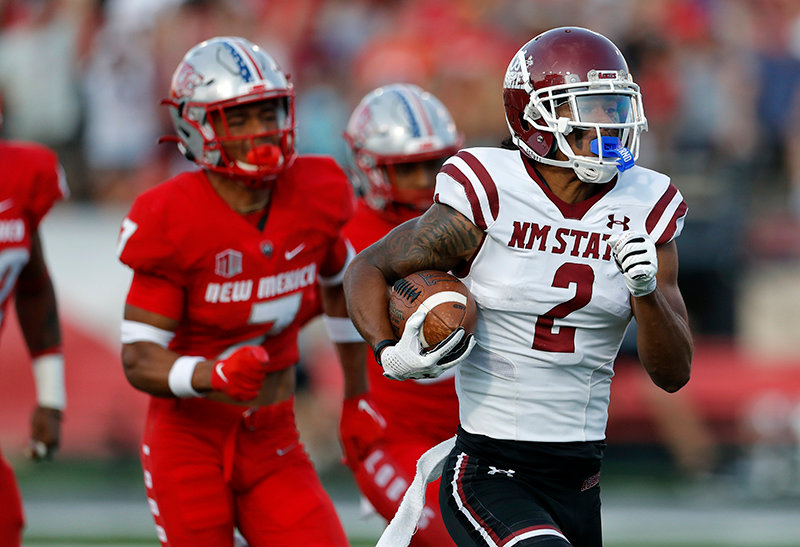 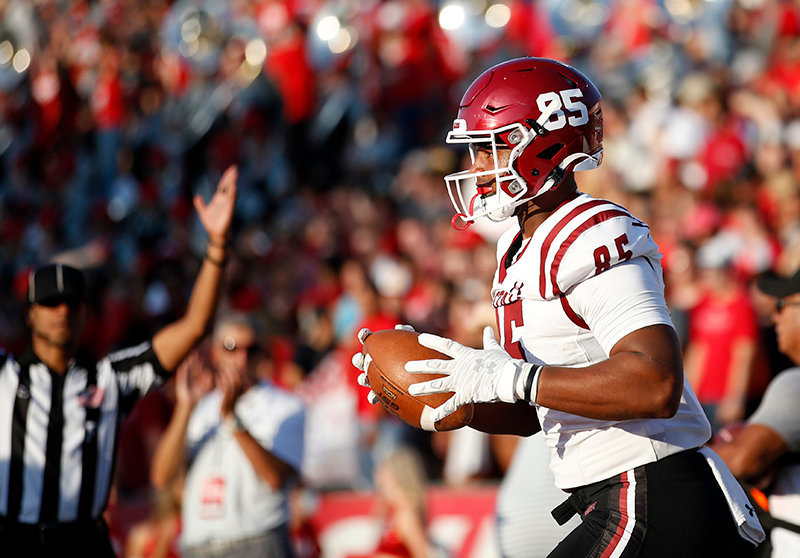 The NM State Aggies fell to the University of New Mexico 34-25, Saturday at University Stadium.

The Aggies (0-3) lost starting quarterback Jonah Johnson in the loss. Johnson completed just 4-of-10 passes for 33 yards before leaving at the end of the first quarter with a wrist injury.

Ventura College transfer Dino Maldonado replaced Johnson and completed 13-of-34 passes for 192 yards and a touchdown. The score was a 75-yard second-quarter bomb to Isaiah Garcia-Castaneda. Garcia-Castaneda caught three balls for 98 yards and two touchdowns (one passing, one receiving), while Maldonado also added 46 yards rushing on six attempts.

For the Lobos (2-0) Kentucky transfer Terry Wilson led the way completing 26-of-37 passes for 381 yards and three touchdowns.

HOW IT HAPPENED:
The Aggies lost the coin toss for the first time this season, as UNM won the toss and chose to receive the football.

On the very first play from scrimmage, Wilson dropped back to pass and hit Zarak Scruggs, Jr. for a 58-yard pass play that advanced the ball to the Aggie 13-yard line.

After a nine-yard strike from Wilson to Emmanuel Logan-Green pushed the ball to the four, Bobby Cole ran the ball in to give the Lobos a 7-0 lead just 60 seconds into the contest.

Following an Aggie three-and-out, Wilson and the Lobos used an 11-yard rush on first down and a 15-yard facemask penalty to advance to their own 42.

After Dalton Bowels dropped Wilson for a loss of three on first down, UNM snapped the ball over Wilson's head creating a live ball, but offensive lineman Cade Briggs recovered the ball at the Lobo 23. Facing third down and 29, UNM handed the ball off to Cole who ran for 11 tough yards. The gain wasn't enough for a first down, as the Lobos and Aaron Rodriguez were forced to punt.

The ensuing Lobo punt traveled just 25 yards setting up the Aggies and Johnson at the 41. After a UNM pass interference penalty advanced the ball over midfield (UNM 44), Johnson completed a pair of passes to Jared Wyatt, advancing the ball to the UNM 31.

The Aggie drive would stall two plays later setting up an Ethan Albertson 43-yard field goal that cut the UNM lead to just 7-3 with 7:42 left in the opening quarter.

Looking to cut into the Lobo lead, Johnson and the Aggies went three and out. On the third down and nine-play, Johnson was injured. As a result, the QB missed the entire rest of the contest.

After the Aggie defense forced a missed 49-yard field goal from UNM's Andrew Shelly, Maldonado took over under center for the Aggies, and used a 10-yard strike to Wyatt and a 37-yard rush to set the Aggies up 1st and 10 at the UNM 22 at the end of the first quarter.

The drive stalled at the beginning of the quarter, leading to another Albertson field goal (33 yards) that cut the UNM lead to just 14-6 with 14:20 to play.

After another UNM drive that ended in a missed field, Maldonado led the Aggies on his most impressive drive of the night.

The QB used a pair of UNM penalties and a 15-yard strike to Andre Bodison to set up a first down situation from the UNM 15.

Needing a spark, HC Doug Martin called a double-pass, as Maldonado found Garcia Castaneda who turned a fired a strike to tight end, Thomaz Whitford, in the corner of the endzone for an Aggie score that cut the UNM lead to just 14-13 with 6:33 left in the opening half.

UNM regained possession and used six plays to advance the ball to midfield where they faced a fourth down and one. On the ensuing play, UNM tried to run Cole up the middle but Josh Ferguson and Devlin Kirklin rushed down to stop the running back for no gain.

With possession back, Maldonado dropped back to pass on the first play and was intercepted giving the ball right back to UNM near midfield.

The Lobos would take advantage using a 23-yard pass from Wilson to Logan-Green to set up a 17-yard touchdown pass to Andrew Erickson. The score gave UNM a 21-13 lead with 2:07 left.

Needing an answer, Maldonado found Garcia-Castaneda for a 75-yard score that brought the Aggies to within 21-20 with 117 seconds left in the half.

UNM answered the Aggie touchdown drive right before the half, using a personal foul from the Aggies on the kickoff and a 25-yard strike from Wilson to Jarvis to hit a 45-yard field goal that allowed the home team to take a 24-20 lead into the half.

Following another stalled drive from the Aggie offense, punter Josh Carlson pinned UNM back, connecting on a 45-yard boot that backed UNM up to its own 10.

On the very first play of the drive, linebacker Chris Ojoh invaded the Lobo backfield and forced an intentional grounding penalty in the endzone that resulted in a safety. The penalty brought the Aggies to within 24-22 with 12:10 left in the third period.

After the next Aggie drive stalled, the NM State defense again forced a Lobo turnover on downs, as Lama Lavea blew up a fourth down and two play to give the NM State offense the ball back down 24-22 with 6:01 to play.

NM State would be forced to punt on its next two drives, the second of which resulted in a 53-yard return from Logan-Green that set UNM up at the Aggie seven.

Faced with a short field, the NM State defense did its job, allowing the Lobos to gain just one yard, setting up a Shelly 24-yard field goal with 36 seconds left that gave UNM a 27-22 lead.

Maldonado used a pair of perfect passes to Robert Downs III and Juwaun Price to set up another Albertson field goal. The 37-yarder brought NM State to with 27-25 with 12:32 to play.

The score proved to be the final of the night as the Lobos held on for a 34-25 victory.

COACH SPEAK (HC DOUG MARTIN):
"When you're down to your third quarterback, and he is a walk-on, it's going to be tough. It is what it is. Dino played his heart out. The team played as hard as they can play, and they're a great group of guys. We've known all along our Achilles heel was going to be giving up some big passes. We made some great third and fourth down stops though and our defense did a good job of keeping us in the game. We knew it was going to be difficult to score on UNM, especially with our third-string quarterback. But I'm proud of how our guys played."

QB DINO MALDONADO:
""It was a great opportunity for me. I wanted to get out there and help my team get the win. We came up short, so it's time to get back to practice on Monday and get prepared for the next game. I am pretty comfortable with all of the offense. I missed a couple of calls tonight, but I'll get better with that. I will continue to improve all week and be 100% ready next week."
With more reps, I think I will get more comfortable. I am willing to do whatever my coaches ask of me, and I am willing to do anything I can to help the team improve and win games."

WR ISAIAH GARCIA CASTANEDA:
"My touchdown pass was fun. We had practiced it all week, and those types of plays are always super exciting to get to complete in a game. I felt the pressure in the corner and look up and saw the tight end and just tried to drill it in there. It was fun getting that play done. In high school, they used my running abilities too. So, there were times I would throw one, run one and catch one."

NOTEABLES:
• The third-quarter safety was the first forced by NM State since 2016 (Arkansas State; Nov. 12).
• Maldonado saw his first FBS action. The QB also threw his first-career FBS touchdown.
• Garcia-Castaneda is the first non-QB to throw a touchdown pass for the Aggies since Tony Nicholson threw a touchdown to Josh Adkins against UTEP (Nov. 23).
• Maldonado is third different Aggie QB to see action this season. QB Weston Eget played against UTEP and suffered an injury that kept him out of tonight's game.
•  Ferguson had a career-high and game-best 12 tackles on Saturday.
• The NM State defense had 7.0 tackles for loss and a pair of sacks.