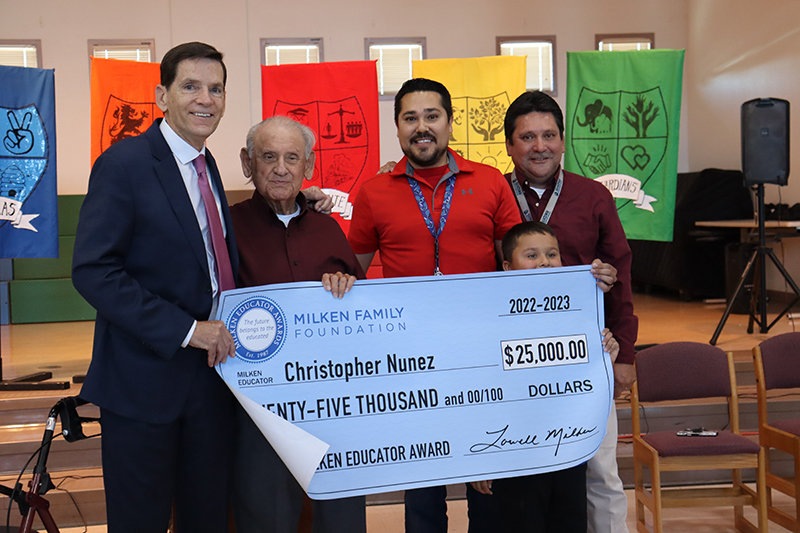 Christopher Nuñez, in red, a teacher at Sonoma Elementary School, won a $25,000 award from the Milken Foundation.
Courtesy photo 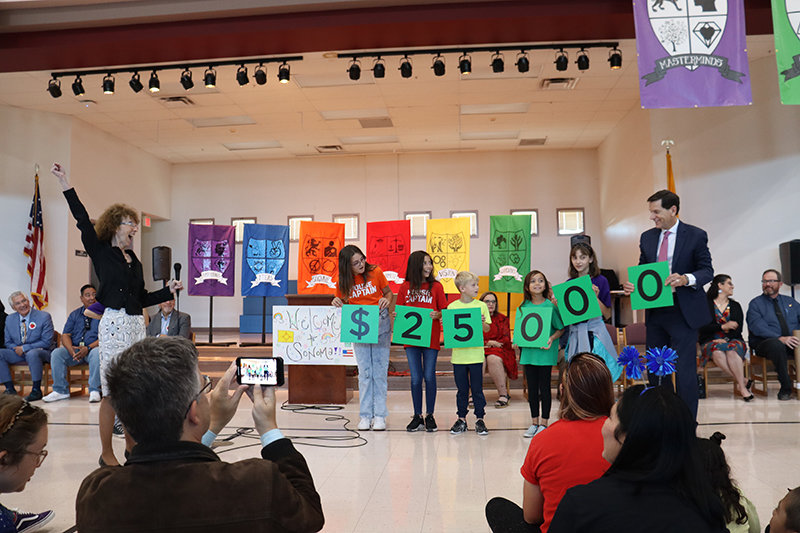 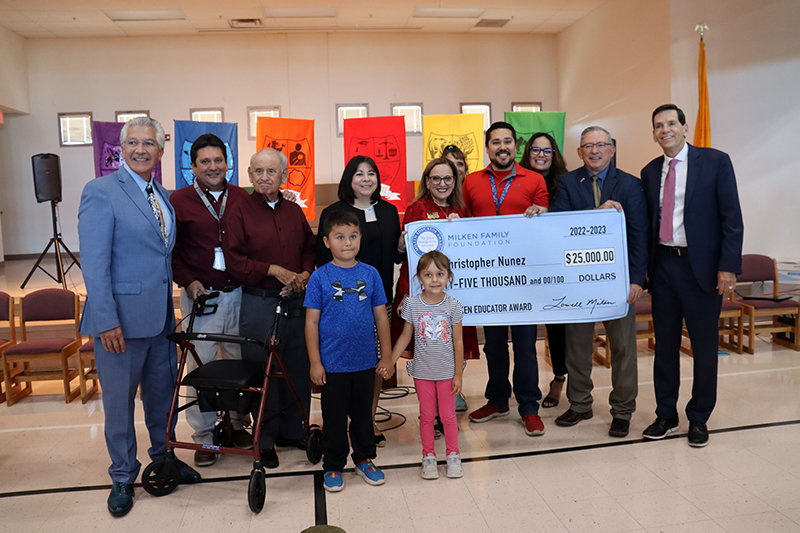 Sonoma Elementary School fourth-grade teacher Christopher Nuñez received $25,000 last week as one of 40 elementary educators to receive this year’s Milken Award, which have been presented by the Milken Family Foundation since 1987.

“Christopher Nuñez exemplifies what it means to be a teacher,” New Mexico Public Education Sec. Kurt Steinhaus said. “He’s gone above and beyond to ensure his fourth graders understand real-world applications of classroom material and become lifelong learners. His efforts to amplify the social and academic skills of every child in his class are evident in the high performance of his students. Thank you for your hard work and leadership, Mr. Nunez. You are a role model for everyone in education.”

In Nuñez’s classroom, Milken said, “students build problem-solving skills through engaging hands-on activities. Nunez’s fourth graders use measuring tapes and cubic tiles to design gardens and pools for their backyards during lessons on area and perimeter. When Sonoma adopted its 1:1 technology initiative, Nuñez led the school’s efforts to demonstrate to the state that the iPads were being used effectively in instruction, guiding students as they used iMovie to create videos on curriculum-linked topics in social studies, science and literature. Children lead class discussions and demonstrate their strategies to accomplish each lesson’s learning objective. Nuñez uses research-based strategies to enhance instruction for all students, especially English learners, and analyzes data to identify areas where more instruction is needed.”

“At the end of each day,” Milken said, “Nuñez has students answer exit ticket questions based on the day’s learning targets and assess their own understanding of the concepts with green, yellow and red stickers. In the after-school programs he leads, students conduct interviews and write human interest stories for Sonoma’s broadcast channel, such as profiling the then-new assistant principal. In “Reader’s Theater,” they read a play, rework the characters or ending, then act it out for their peers. Nunez’s students excel, growing from 70 percent to 100 percent proficient on the iReady Math assessment and ending the year with 92 percent proficiency on the Star Reading test.

“A member of Sonoma’s leadership team, Nuñez championed the idea of dividing the school into six ‘houses’ to strengthen connections among students in different grades,” Milken said. “Each house has a focus. Team Vision, for example, brainstorms new ideas and encourages collaboration, while Team Atlas centers on love and kindness. Nuñez leads professional development in technology and math, and helps new staff members navigate classroom issues, content area questions and technology. He has shepherded the adoption of new textbooks as Sonoma’s social studies lead and works with colleagues on data analysis and backwards planning. Nuñez participated in Harvard University’s Partnership for Enhancing Mathematics, recording his lessons and working with coaches to refine his teaching practice. During the pandemic, Nuñez went above and beyond to make sure learning was accessible for all, providing extra Zoom help for ELA and math intervention groups and creating highly interactive lessons using breakout rooms, annotation, Jamboard, Nearpod and Canvas.”