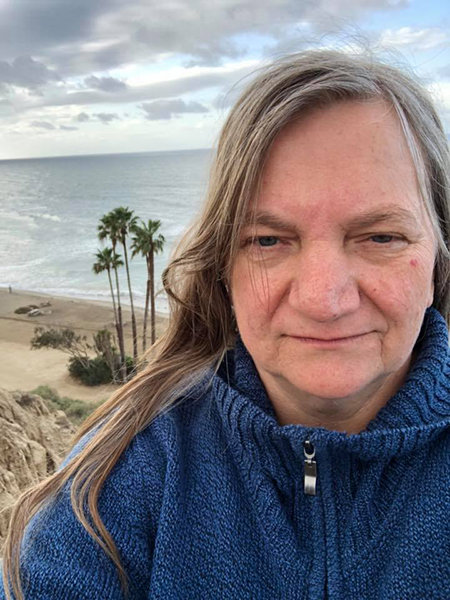 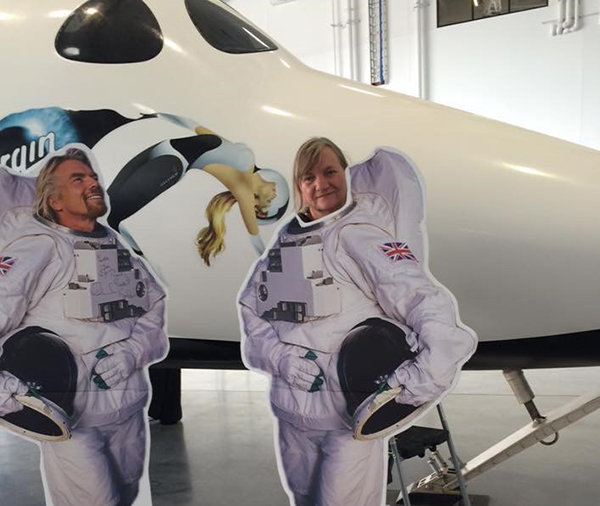 Sunday, July 11, was definitely a long day. We were at the buses in Las Cruces at 2:30 a.m. and didn’t leave for Spaceport America until close to 4. We got there a little after 5 and the Unity 22 launch had been delayed until 8:30 a.m.

It felt a bit isolated at first. Many, many press members from all around the world were around us, my son Lanze (who was there as my photographer) and I. I talked to media members from New Zealand, Italy, England and more. But we were kept on one end of the area and things were really happening on the other end. We saw later on the video screen and not in person, Branson arriving on his bike. When all the astronauts arrived, we weren’t able to see them.

Some people came over to talk with us, like Gov. Michelle Lujan Grisham; Rick Homans, who was economic development secretary when it all started with a handshake between Branson and Bill Richardson; Scott McLaughlin, the current CEO of Spaceport America; and Pat Hynes who works at New Mexico State University and curates the International Symposium for Personal and Commercial Spaceflight in Las Cruces every year. She is also a future astronaut and deeply interested in the research that can be done in space.

Then, on July 20, another wealthy man headed for space. Jeff Bezos is the founder of Amazon, the man who started an online bookstore in his garage in 1994. Bezos took with him his brother Mark, female aviation pioneer Wally Funk and a paying customer, 18-year-old Oliver Daemen. I watched his Blue Origin ship, New Shepard, climb into space via YouTube since the press was not invited there to the Van Horn, Texas launch site. But I would have been there too if they let me.

But why? What is this thing inside us that drives us up, into the darkness beyond the solid ground of this blue marble?

For me, it is hope. I hope the people of the world can find a new frontier, a place of imagination and a place to grow. As long as our children can stretch to imagine something better, they will reach to achieve the things they see in their minds. Like Jeff Bezos, who, in his high school valedictory speech, told the audience he dreamed of the day mankind would colonize space to get all people off the Earth and see it turned into a huge national park.

There are many naysayers, people who insist the money spent by these billionaires would be better spent feeding hungry children, addressing gun violence, and focusing on the economy or the environment.

But what is hope but the growing of minds? These minds, as they learn and grow will work toward a better world. Both Branson and Bezos talked about looking at the world from space and noting how small and frail it is. They know the world needs help. Both offer hope in the form of funds as well, pouring money into foundations, education and human endeavors that cause endless trickles into the world addressing sustainability and knowledge.

Is it really a waste of time growing jobs for engineers, rocket builders, environmental specialists and hospitality managers? Is it really an obscene waste of money to spend “$250,000 for a 20-minute amusement park ride?” Or is it a way to channel hope into something of substance?

“The vast amount of money that is spent in ways that we might not think productive is beyond our control,” writes a Facebook friend of mine, Geoff Dennis. “Consider the vast amounts of money spent on movies and sports. At the very least, this kind of project employees a lot of scientific and technical people. Hundreds, if not thousands, are taking home a paycheck for doing this. It is hard for me to think of that as a total waste.”

And then are the innovations that always will come out of space exploration. The list of things we would not have but for space exploration is long and includes things like cell phones, scratch-resistant lenses, ear thermometers, shoe insoles, cordless tools, tap water filters, satellite navigation, memory foam and smoke detectors.

Elva K. Österreich is editor of Desert Exposure and a special projects editor with the Las Cruces Bulletin. She can be reached at elva@lasbulletin.com.