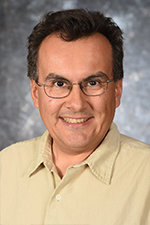 The office is based at New Mexico State University, where DuBois also oversees the state Community Collaborative, Rain, Hail and Snow Network (CoCoRaHS). He’s been state climatologist since 2010, and before that spent four years with the New Mexico Environment Department’s Air Quality Bureau. He introduced a course called Introduction to Air Pollution at NMSU, and taught Air Pollution Control Fundamentals and Meteorology and Climate at the University of Nevada Las Vegas while working at the Desert Research Institute.

DuBois’ office is involved in a number of studies regarding New Mexico climate and weather conditions. For example, he is looking for ways to reduce the evaporation of water from reservoirs in the state.

New Mexico’s two-decade-long drought has significantly reduced water storage in those reservoirs, DuBois said. Elephant Butte, for example, is at “the lowest drawdown possible” this year, he said. It can store almost 1 million acre feet of water, but only has about 200,000 right now, he said.

A “change in climate” is contributing to the reduced water level, he said, because higher temperatures mean more evaporation and an increased need for water for native vegetation to survive.

DuBois said Las Cruces broke its official high temperature record for June 13 when it hit 107 degrees at NMSU. The day before, it tied the 103-degree record. (The city’s official record high of 110 degrees was recorded at NMSU in 1994, DuBois said.)

NMSU has weather records for Las Cruces going back to 1892, he said. One of its original temperature readers was Fabian Garcia (1871-1948), the first director of the Agricultural Experiment Station at what was then New Mexico College of Agriculture and Mechanic Arts and is now NMSU.

DuBois’ office is also advising the New Mexico Department of Health on ways to mitigate the impact of dust on the human immune system – recommending, for example, that people plant more vegetation around their homes to reduce dust and that construction projects not be undertaken “just before the onset of the windy season,” he said. The City of Albuquerque has a dust ordinance, DuBois said, and that might be a possibility for Las Cruces.

His office is measuring dust storms in a project along Interstate 10 near Lordsburg that includes the use of time-lapse photography, DuBois said. One of the recommendations from that study to the New Mexico Department of Transportation was to pave highway shoulders in certain areas so vehicles have an area to park if the New Mexico State Police stop traffic because of a severe dust storm.

He is also working with the City of Las Cruces to improve its shade canopies, which could reduce temperatures by several degrees, is working with the New Mexico Interstate Stream Commission to determine the impact of climate change on water and overseeing the expansion of climate monitoring statewide through the ZiaMet Agricultural Weather Station Network (https://weather.nmsu.edu/ziamet/).