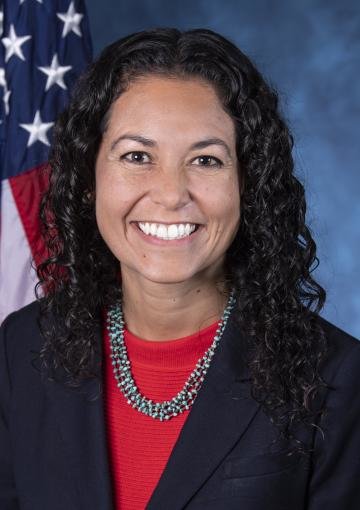 “It is such an exciting time to get to be undersecretary for Rural Development, as we are about to see this historic investment in rural America,” Xochitl Torres Small said in an Oct. 28 online interview with the Bulletin.

Torres Small of Las Cruces was confirmed by the U.S. Senate in mid-October as the undersecretary for Rural Development in the U.S. Department of Agriculture (USDA). In 2019-20, Torres Small was the U.S. representative for New Mexico’s 2nd Congressional District. She lost re-election in 2020 to current U.S. Rep. Yvette Herrell, R-N.M.

The appointment “is a dream come true. I am so grateful to get to have this job,” Torres Small said. “It’s very exciting taking the lessons I learned from New Mexicans about the work that needs to be done and applying it for the whole country.”

Torres Small’s confirmation as undersecretary “is a victory for small towns and rural communities,” USDA Secretary Tom Vilsack said in a prepared statement.

“As the daughter of migrant farm workers and a native of rural New Mexico, Torres Small represents the heart and soul of rural communities,” Vilsack said. “In this role, she will serve as an unwavering voice for millions of rural Americans and drive the effort to revitalize rural.”

Vilsack, a former governor of Iowa who served eight years as agricultre secretary in the Obama administration, is “an incredibly dedicated man and committed to rural America,” Torres Small said.

Torres Small is the first undersecretary for Rural Development in five years, she said, because the position was eliminated during the Trump administration.

“It’s exciting to see that reach and that investment,” Torres Small said about the allocation of additional federal funding for internet connections across the country during her first two weeks in office. Part of her work, she said, is to “make sure rural communities get good reliable internet,” including connecting more people to telehealth at Ben Archer health clinics in southern New Mexico.

Along with climate change, “poverty is a huge challenge” in rural areas, Torres Small said, including colonias in southern Doña Ana County, where “it’s really difficult to make sure people have the opportunity to succeed.”

People in rural communities in southern New Mexico and throughout the country face similar challenges and have similar hopes, Torres Small said. One hope they share, she said, is that that their children can thrive in rural areas.

“We know that America will not succeed if rural America does not succeed,” she said.

Through his Build Back Better program and other initiatives, Biden is “investing and working for the whole country,” Torres Small said. “This investment shows Rural Development is delivering and investing in rural places.”

Rural Development has staff in 47 states, Torres Small said, and many more field offices, where employees “are embedded with the places and people they serve.”

“This is a good day for rural America,” Torres Small said.