Unidad Park and Playground replacement kicks off with honor ceremony 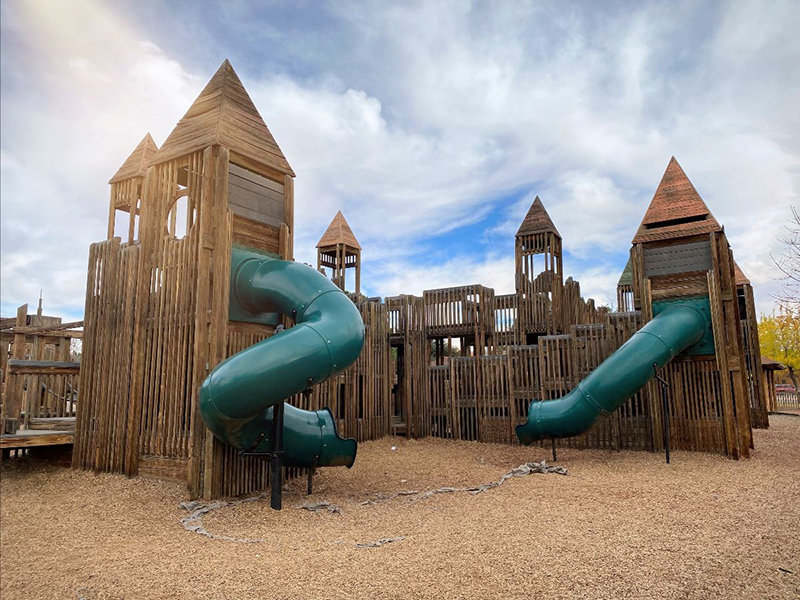 The public is invited to attend a special ceremony hosted by the City of Las Cruces that features Unidad Park beginning at 10:30 a.m. Wednesday, December 8, at the park location east of the Parks and Recreation Building at 1500 E. Hadley Ave. This event, billed as Honoring Our Past, Celebrating Our Future, recognizes the unique history of this community-built structure that was erected in 2001 thanks to community donations and dozens of volunteers.

“The playground has become an icon over the years where generations of families have come to enjoy the peacefulness of the park and play on its distinctive features,” said Sonya Delgado, director for the City’s Parks and Recreation Department.

Delgado explained that because the playground is made mostly of wood, the harsh southwest climate has deteriorated the surfaces over the past 20 years to a point where playground safety is a fundamental concern. City personnel have tried over the years to protect and cover some surfaces that get heavy use, but that now is the time for total replacement.

“The safety of this playground is precisely why we recommended that it be replaced with materials that will hold up better over time and meet playground industry standards,” Delgado explained. “That’s why we’re investing close to $2 million in this park alone, paid for from the general obligation bonds that voters supported in 2018.”

Members of the community were invited to design meetings in February 2020 prior to the Covid-19 pandemic closures. Their input informed the final design of the new Unidad Park and Playground. One of the features that will come alive in the new park is a functioning splashpad. The 2000-2001 design of the playground featured a splashpad for which the plumbing was installed but the pad was never built.

“This project is bittersweet,” Delgado said, “While it represents a true community effort of Las Crucens coming together to build something special for children, it must now be replaced. But it also means much safer structures for children – and adults – and something that will last in perpetuity.”

The City’s Public Works Department is overseeing the contractors for the project. Activity to prepare the site for the new playground and park will start later this month. The walls that feature the tiles with children’s hands and the wood slats with names will remain as an historical part of the area. City personnel will be considering other features that honor the playground’s history as well. Park and playground replacement is anticipated to be completed before summer 2022.

Wednesday’s ceremony will feature guest speakers from the City in addition to some 2001 volunteers who participated in the project. Ziggy, the Parks and Recreation Department’s mascot, will make a guest appearance and students from Jardin de Los Ninos are helping the City with the celebration. Representatives from the architectural firm, contractors and the program management are expected to be available. Renderings of the new playground will be on hand.

Parking is available north of Hadley Avenue at the park entrance parallel to N. Hermosa Street. Additional parking is available around the park area. This event will observe current health protocols from the New Mexico Department of Health with social distancing and face masks. For additional information or questions, please contact the Community Engagement Office at clcengage@las-cruces.org or call at 575-541-2192, or 575-541-4557.