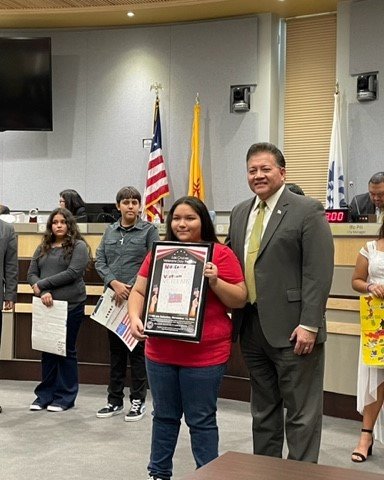 Mesa Middle School eighth grader Andrea Logo won this year’s City of Las Cruces Veterans Day Parade Poster Design Contest, and was honored at the Oct. 3 city council meeting, along with other students who participated in the contest.

“The poster design contest is an annual event started by Bill Hawkins, chairman of the Veterans Day Parade Committee five years ago,” said Veterans Day Parade Committee Coordinator Dolores Archuleta. “This year, over 200 posters were submitted, so it was difficult for the committee to reach an agreement on the winner, especially when the posters are evaluated on content, theme, artistic representation, spelling and grammatical accuracy. Posters that fail to follow the contest rules or do not reflect the theme of the parade will not be evaluated.

“Congratulate Andrea Lugo when you see her participating in the Veterans Day Parade,” said Archuleta, a former city councilor.

The Las Cruces Veterans Day Parade will begin at 11 a.m. Saturday, Nov. 12. This year’s theme is "Welcome Home Vietnam Veterans." The parade’s opening ceremony will be at 10:30 a.m. at the reviewing stand at the corner of Las Cruces Avenue and Main Street. At the sound of the cannon at 11 a.m., directed by Mayor Miyagishima, the parade will begin.

Parade participants will stage at the corner of Lohman Avenue and Main Street and travel north on Main Street to the turn-about, then to Water Street back to the staging area, Archuleta said.

The Veterans day Parade was started in Las Cruces “to thank our veterans who served in all the wars,” Archuleta said.

“The late Lt. Col. (ret.) Fred Frank decided that it was time for Las Cruces to have a Veterans Day Parade to honor our veterans, and through his efforts, our first Veterans Day Parade was held on November 11, 1995,” Archuleta said. “It started on Lohman Avenue and traveled north on Church Street past the old City Hall to the Sole Food Warehouse parking lot (now the new City Hall).  Fred Frank continued the Veterans Parade for over five years with no mention in the local media that a Veterans Parade was held, but this didn't discourage him from continuing the parades. ‘They are getting better,’ he insisted. And they did get better.

“The list of participants at our city-sponsored parade is too long to list them all, especially the 10 parade grand marshals led by the White Sands Missile Range Joint-Service Color Guard,” Archuleta said. “We thank the band directors of the four high school marching  bands and the Gadsden High School band for participating this year.

“If you participated in the parade last year, Bill Hawkins may have already called you. If you have not heard from him, he wants you to register at http://lascrucesvetday.org. He will contact you.”