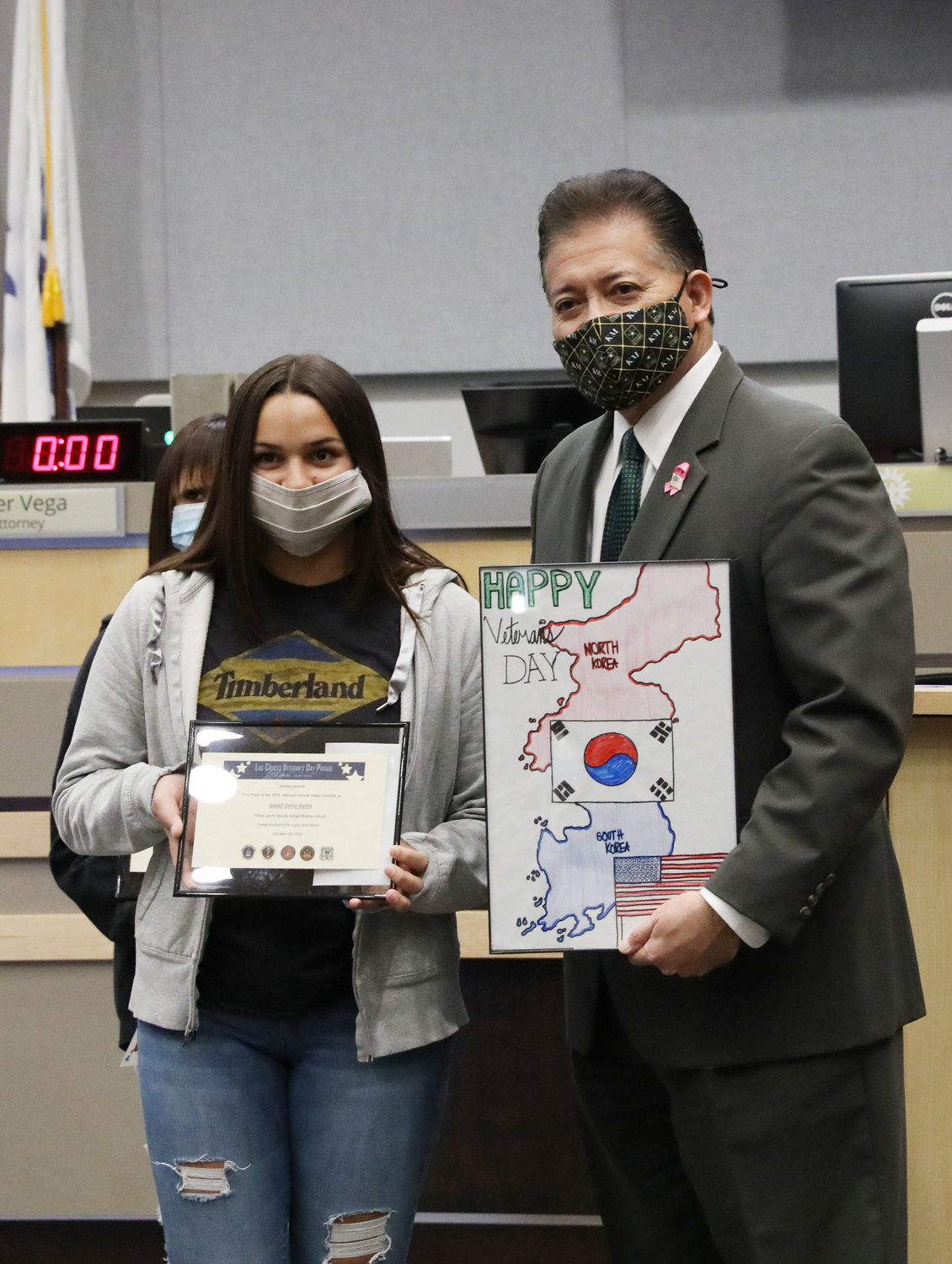 Isabel Della-Ratta, an eighth grader at White Sands Middle School, was the winner of the City of Las Cruces 2021 Veterans Parade Poster Contest. She is shown here with her winning entry with Mayor Ken Miyagishima at the Las Cruces City Council’s Oct. 18 regular meeting. Isabel won $40 for her first-place poster and will be featured in the Nov. 6 parade. The committee has held a parade poster contest for Las Cruces middle and high school students since 2015. There were 150 submissions this year, with six winners selected for first-, second- and third place, along with honorable mentions.
Photo by Jennifer Martinez, City of Las Cruces 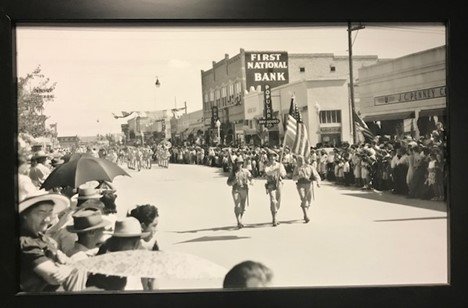 Before Urban Renewal, all the Las Cruces Veterans’ Day parades were along Downtown Main Street, as shown in this photo of a 1944 parade. The population was about 9,000 and it appears that at least half of them were enjoying the parade as spectators.
Photo is courtesy of Dolores Archuleta

Because of the pandemic in 2020, we were not able to honor our veterans with a parade, but we are making up for it this year.

The City of Las Cruces Las Cruces Veterans Day Parade Committee, chaired by Bill Hawkins, scheduled the parade at 11 a.m. Saturday, November 6. The opening ceremony in front of the reviewing stand on the corner of Main Street and Las Cruces Avenue will start at 10:30 a.m.

The parade will stage on the corner of Main Street and Lohman Avenue, travel north on Main Street to the turn-about, and continue south on Water Street back to the staging area.

This year’s parade theme is “Honoring Our Korean War Veterans.”

Bill Hawkins has contacted the 2019 parade participants by email for availability this year. If you have not heard from him or if you are a new participant, please register at our website: www.lascrucesvetday.org.

Our first parade in Las Cruces

In 1995, the late Lt. Col. (ret.) Fred Frank decided that it was time for Las Cruces to have a veterans parade to honor our veterans, and through his efforts, our first veterans parade was held Nov. 11, 1995.

It started on Lohman Avenue and traveled north on Church Street past the old City Hall to the Sole Food Warehouse parking lot (now the new City Hall).

I decided to research this because the veterans I talked to didn't remember a veterans parade, but when I talked to him about the parades, Frank responded that they are there and "getting better every year."   I went to the Branigan Library and started reading all the Sun-News newspapers looking for something about the veterans parade and found no mention of a parade on or before Veterans Day.  Finally, on November 11, 1999, Steve Ramirez reported in the Sun-News on the fifth annual Veterans Day Parade with "at least 6,000 lined up to watch it." The parade, according to Ramirez, traveled the same route as the first one in 1995. There was a fly-over, that, without a doubt, knowing Mr. Frank, he arranged it. Ramirez further reported that Fred Frank was very excited about the attendance of about 6,000. (The population of Las Cruces in 1999 was about 73,000).

The 2021 Veterans Day Parade Committee challenges the community to have no less than 8,000 people at the parade. We can't have a fly-over, but we are prepared to present to the parade participants and spectators a very special guest, a graduate of Mayfield High School: Col. James Brady, USA, garrison commander, Fort Bliss, Texas.

It is going to be a great parade to make up for 2020 when we could not have one because of the pandemic.

During the Oct. 18 regular meeting of the Las Cruces City Council, Mayor Ken Miyagishima called the annual Veterans Day Parade “a really great event.” It’s an opportunity for the city and county “to show how much our veterans mean to us,” the mayor said. “It’s a really big deal.”