What to expect this monsoon season 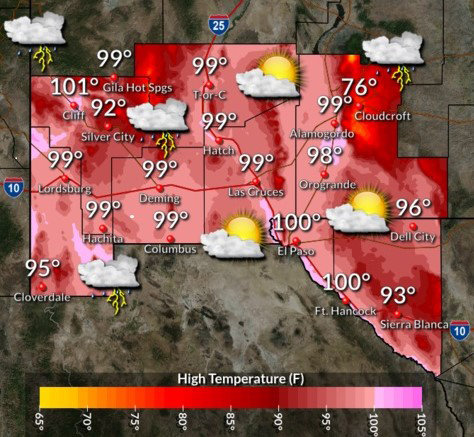 A monsoon is actually “a seasonal reversal of winds,” said Laney, who works in the NWS El Paso office in Santa Teresa, New Mexico, and has been a meteorologist for 33 years.

New Mexico usually gets about 40 percent of its annual rainfall during the monsoon season, said State Climatologist Dave DuBois, Ph.D., who is based at New Mexico State University in Las Cruces. On average, the state gets about 9 inches of rain in a calendar year, he said, but it’s been in a drought since 1999.

DuBois said the monsoon season means “a shift in the wind direction” from a southwest flow to a more moisture-laden southeast flow across Mexico. He said southern New Mexico, including Las Cruces, is likely to feel more of an impact from the summer monsoon than the northern part of the state.

Most local winds are from the west and southwest, Laney said, and are very dry because the closest moisture source is the Pacific Ocean, more than 1,000 miles west across the Rocky Mountains.

When the jet stream changes direction, which usually coincides with the onset of summer, prevailing winds become south and southeasterly, Laney said, coming from the tropics and the Gulf of Mexico and bringing moisture that doesn’t get lost in the mountains. Combined with higher summer temperatures, that change means “a better chance for rain,” Laney said.

“It has more to do with the wind,” Laney said. “The rainfall is just a happy byproduct of the monsoon.”

In the past 11 years, the Las Cruces area has received as much as 7.32 inches of rain during a monsoon season (2010) and as little as 2.59 inches (2020), Laney said. Since 2010, there have been two “wet” (above average moisture) monsoon seasons, seven “dry” (below average) seasons and two normal seasons. The last wet season was 2017, which has been followed by three consecutive dry seasons.

This year, “we’re going to get more rain than we’ve seen the last two years,” Laney said. That won’t break the drought, he said, but it will be a significant increase over the first five and one-half months of 2021, during which .48 inches of rain has been recorded in Las Cruces, which is 1.22 inches below normal, he said.

In his “unofficial forecast,” Laney said he is “leaning toward a monsoon that’s probably going to give us more rain than we’ve gotten the last two years, but slightly less than normal,” which is 4.5 to 5 inches. It likely will be almost double “the last few years we’ve seen,” Laney said. “That’s still a positive note in my world.”

How to join rain-monitoring program

If you are interested in state and local weather and climate, you might want to join CoCoRaHS (co-co-RAZ), which stands for Community Collaborative, Rain, Hail and Snow Network.

CoCoRaHS is based at New Mexico State University in Las Cruces and includes volunteer precipitation observers across the state.

“It’s a fun and easy way to keep track of the precipitation falling (or not falling) in your backyard, and it allows you to contribute to a valuable national source of weather information,” according to the collaborative’s website.

Participation in CoCoRaHS requires a high-capacity, 4 inches-in-diameter rain gauge. The official CoCoRaHS gauge is on sale for $32.75 at https://weatheryourway.com/collections/cocorahs-gauge-parts.

If you want to join, fill out the form at www.cocorahs.org/application.aspx.