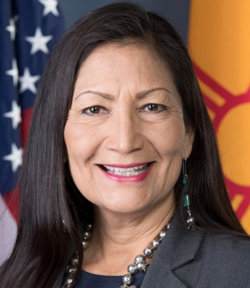 Deb Haaland
Photo is from https://haaland.house.gov 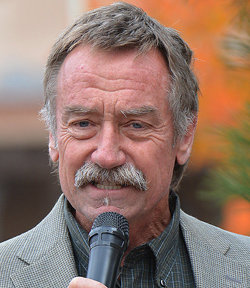 “It’s just really important that we not just stop wall construction but that we take it down wherever we can,” Southwest Environmental Center (SWEC) Executive Director Kevin Bixby said.

Bixby said President-elect Joe Biden has pledged to stop construction of the border wall “on Day One” of his administration, and has said he will rescind the emergency declaration that has allowed President Donald Trump to take money from the U.S. Department of Defense budget to pay for wall construction.

But “whether [he] actually takes down the wall in certain places or not is still undecided,” Bixby said.

He said SWEC is part of a coalition supporting the identification and prioritization of sections of the wall for removal. Those that have impacted tribal lands and wildlife corridors “will be at the top of the list,” Bixby said.

He said SWEC and other groups supporting the removal of the wall are encouraged because Biden has nominated U.S. Rep. Deb Haaland, D-N.M., to be the new secretary of the U.S. Department of the Interior. Haaland is an outspoken opponent of the wall.

“One of the worst things Trump did in building the wall is he desecrated tribal lands, in Arizona,” Bixby said. Haaland is a member of Laguna Pueblo and a native of Winslow, Arizona.

“I think we’ll see the wall come down in places, particularly in Arizona and the Bootheel of New Mexico,” Bixby said. “I don’t know about Doña Ana County.”

Even though the wall has impacted wildlife in Doña Ana County, its wildlife are not designated as endangered, and the portion of the wall in the county hasn’t impacted any specialized land designation, he said, although Organ Mountain Desert Peaks National Monument does come close to the U.S./Mexico border.

“I’m hoping the (Biden) administration will understand the impact of the wall on wildlife everywhere and put in gaps everywhere,” Bixby said. “You can make an ecological case for doing that. Mountain lions, mule deer, coyotes, javelina, badgers and other animals of the Chihuahuan Desert that aren’t on the endangered species list “would benefit from having gaps opened in the wall every few miles or so.”

Bixby said opposition to taking down the wall will come from “border security hawks and anti-immigration forces,” including Republicans in Congress.

“It’s not going to be easy to take down any part of the wall,” he said. Biden will “have to make the case that taking down the wall “is not going to compromise security,” Bixby said.

Bixby said reports have dismissed the significance of 400 miles of wall as “just replacing existing barriers.” But, he said, those were mostly vehicle barriers, four feet tall with gaps where animals can get through. They were replaced with 30-foot barred walls that have very small gaps between their uprights that are impossible for any wildlife larger than a rabbit to get through, Bixby said.

He said the U.S. Army Corps of Engineers recently estimated the federal government could save more than $2 billion if it cancelled additional wall construction on Jan. 20 – the day Biden is inaugurated. Bixby said that money could be used to create green jobs taking down the wall and restoring lands that have been damaged by it.

Southwest Environmental Center of Las Cruces Executive Director Kevin Bixby said President-elect Joe Biden’s selection of U.S. Rep. Deb Haaland, D-N.M. as the next secretary of the U.S. Department of the Interior is “going to be a great choice for a lot of reasons.

“She really gets it,” Bixby said of Haaland, who has represented New Mexico’s first congressional district since January 2019 and was just re-elected to her second term in the U.S. House.

Haaland will bring “a Native American perspective” to the job of Interior secretary, Bixby said. And, he said, she understands the urgency of climate-change and biodiversity, and the environmental issues that threaten human life and all life on earth.

Golf Dr.’s high yield practice lets you get more from your game

One for all: Centennial girls win school’s first golf title