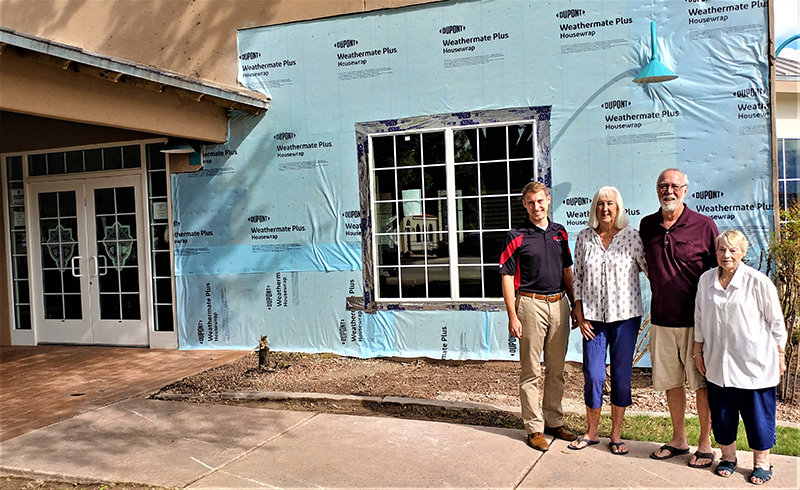 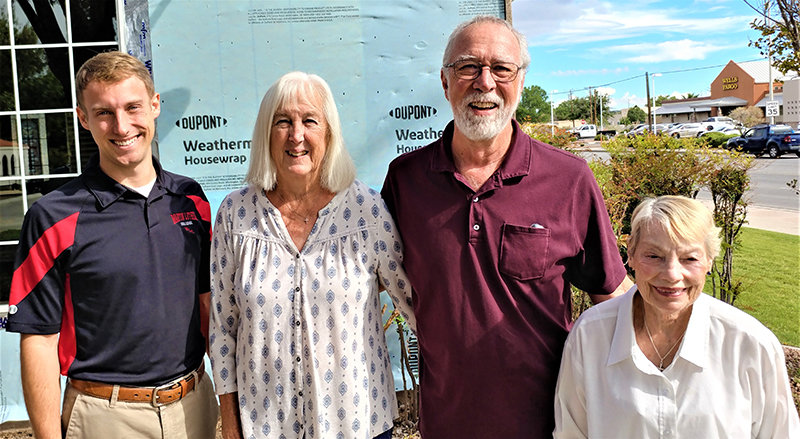 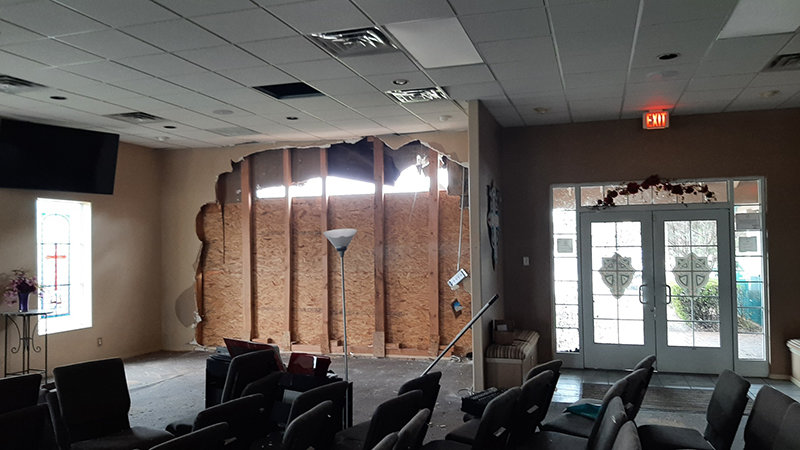 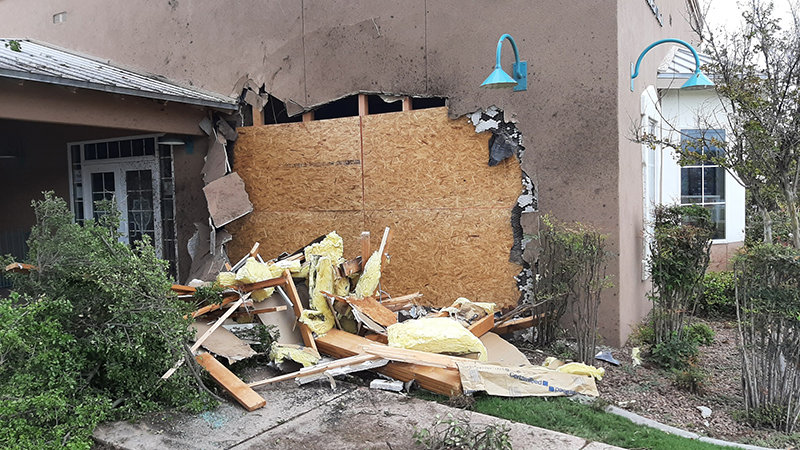 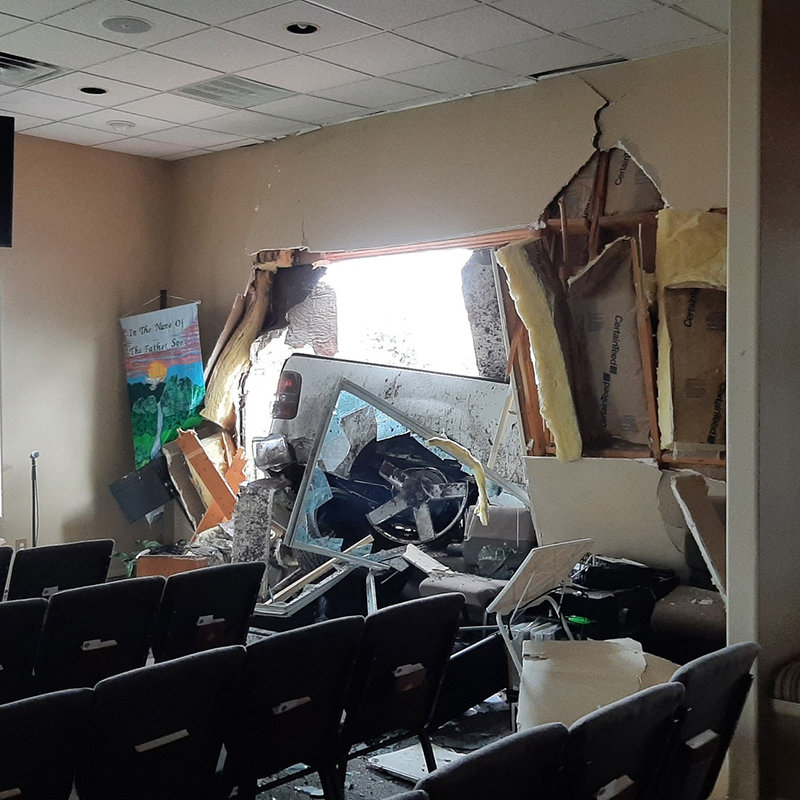 The inside of Cross of Christ Lutheran Church shortly after the Aug. 20 crash.
Photos courtesy of Allan Baker 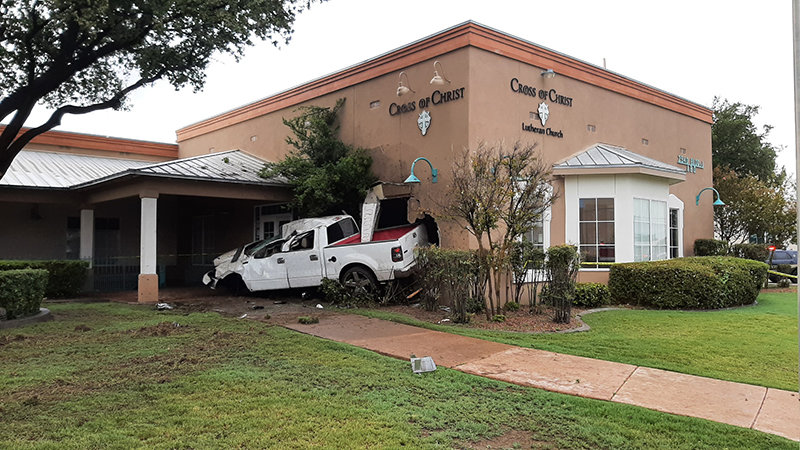 The view from outside of Cross of Christ Lutheran Church soon after the Aug. 20 crash.
Photos courtesy of Allan Baker
Previous Next
Posted Thursday, September 8, 2022 11:48 am
By Mike Cook

At about noon on Saturday, Aug. 20, Allan and Julie Baker were preparing for the next day’s worship service at Cross of Christ Lutheran Church, 1840 El Paseo Road, when Julie “heard a really, really loud noise behind me.”

The next thing she and Allan knew, a pickup truck crashed through the wall a few feet behind them, coming to rest about two feet from Julie’s head. Moments later, as they were making their way to the front door to see if anyone was injured in the crash, the Bakers heard several gunshots, followed a few seconds later by another round of gunfire.

The two retreated into the church office, closed the door and turned off the lights, staying there until Las Cruces police officers arrived on the scene.

Allan and Julie discovered that, while everything around them had been damaged or destroyed, the two chairs they had been sitting in at the church keyboard when the crash occurred were still upright and, except for a few scratches from the flying glass and debris, the Bakers were unhurt.

“That was a miracle,” said Julie, the church organist and a retired medical lab tech and wildlife range manager.

“I have no explanation for that, and I know a lot of physics,” said Allan, a retired electric engineer who handles the church’s audio-visual needs.

Cross of Christ Pastor Nathanael Jensen, who had been teaching a Bible class at a different location at the time of the crash, said Allan left a phone message later that afternoon telling him, “We’re going to need a new place for church tomorrow.”

Jensen arrived at the church to find it draped in crime-scene tape, he said, and thought the Bakers had discovered the damage. He found out a little later they had actually been on the scene at the time.

Members of the Las Cruces Fire Department stayed at the church until about 10:30 that night, Julie said, covering the gaping hole in the south wall with plywood and helping Julie find her purse.

And, although it was obvious a different location would have to be found, “There was no question – we were going to have a worship service” the next day, Jensen said.

He called around and located a conference room at the nearby Courtyard by Marriott, the pastor said, which was provided free of charge for the congregation’s Sunday, Aug. 21 worship.

“It was a great service,” Allan Baker said. “I got a lot more hugs than usual.”

“We were always a close congregation,” Julie said. “We’re even closer than we were. We’re just incredibly thankful.”

“The Lord is on our side,” said congregation member Rose Mary Pedersen.

Part of Jensen’s sermon that Sunday was reminding his parishioners of what is really important, he said.

“The church isn’t a building,” Jensen said. “It’s the people.”

Jensen said he used the truck crash to emphasize that “we need Christ every day, every second.”

What’s most important, he said, is “supporting each other (and) everybody else in the community.”

With a temporary wall in place, the congregation was back at the El Paseo Road location for its Aug. 28 service.

When asked the best way for the community to help the church, Jensen said, “Come here what we’re all about.”

“This is a temporary problem,” Allan Baker said. “This is not a showstopper by any means. Everything still works,” he said, including the keyboard Julie was playing when the crash happened.

Jensen came to Las Cruces a year ago from Watertown, Wisconsin to become the new pastor at Cross of Christ. He had no family in the area, but said he felt immediately embraced by his congregation.

Allan and Julie Baker have been married for 46 years. They met at New Mexico State University.

The church, which is a member of the Wisconsin Evangelical Lutheran Synod, was started in Las Cruces in 2012 and has been holding services at the El Paseo Road location, which is a rental property, for the past seven years. It’s hoping to build a permanent home in Las Cruces.

The owner of the stolen truck learned of its whereabouts and confronted the person who was in possession of the truck, Trujillo said. The man in possession got in the truck with a woman and a small child and drove off. The truck was pursued by its owner in a separate vehicle. During the pursuit, the pickup crashed into the church. After the crash, several rounds were discharged from a firearm at the scene. The woman and the child in the pickup and the pickup’s owner were transported to area hospitals for treatment; the owner of the stolen truck suffered a gunshot wound. All injuries were non-life-threatening, and all three victims have been released from hospital care, Trujillo said.

The driver of the stolen pickup has been located and an investigation of the incident is continuing. No arrests have been made or charges filed at this point, he said.