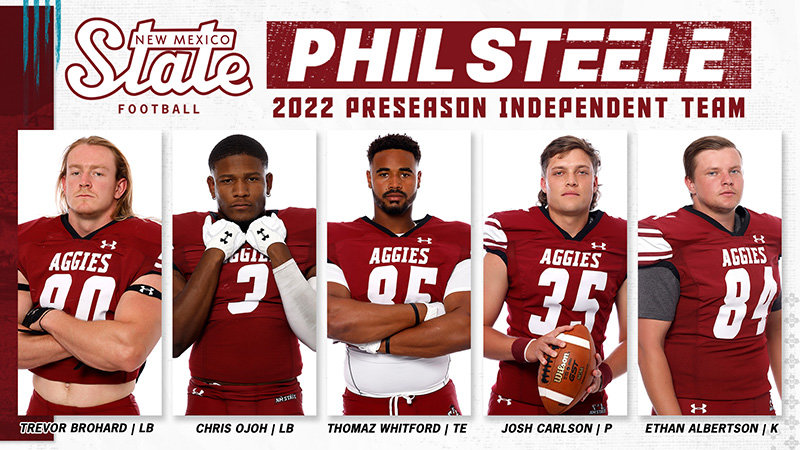 NM State is one of seven football programs across the country without a conference affiliation for the 2022 season. The Aggies are joined by Notre Dame, Brigham Young, Liberty, Army West Point, UConn, and UMass. Kicker Ethan Albertson was the lone First Team selection for NM State. Albertson, a redshirt junior, was 17 of 22 on field goal attempts in 2021 to go alongside a 93.3% success rate on PAT. Albertson gave NM State the lead over No. 1 Alabama in Tuscaloosa last year when he split the uprights from 50 yards out. Thomaz Whitford, Chris Ojoh, Trevor Brohard, and Josh Carlson were all named to the Second Team. Whitford represents the lone offensive selection for the Aggies. Lining up at tight end, Whitford will have a much more defined role under head coach Jerry Kill. In 2021, Whitford hauled in 19 receptions for 206 yards and a pair of touchdowns. Both Ojoh and Brohard are familiar to recoginition from Phil Steele. The linebacker duo both found themselves on the All-Independent Team from Steele at the conclusion of the '21 campaign. While both were named to the second team, they will look to continue their impressive careers. The duo both had 71 tackles last season, tying for second place on the NM State stat sheet. Carlson had an average punt of 41.1 yards throughout the 2021 season. Launching nine punts of 50 yards or further, Carlson ripped a season-long punt of 67 yards at San Diego State. NM State will open the season on Saturday, August 27 at Aggie Memorial Stadium against Nevada. Season tickets are on sale now to catch all six NM State home games. To purchase season tickets, call the Pan American Ticket Office at 575-646-1420.  For complete coverage of NM State football as the Aggies prepare for year one under head coach Jerry Kill and his staff, visit NMStateSports.com - the official home of NM State athletics - and follow the Aggies on Facebook (NM State Football), Twitter (@NMStateFootball) and Instagram (@NMStateFootball).