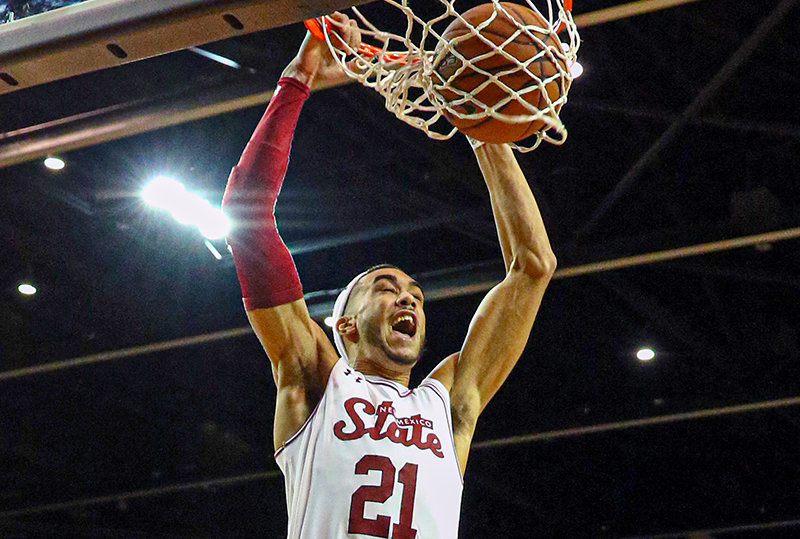 The best player in the NBA G League is a former Aggie.

Announced Thursday afternoon by the NBA G League, Trevelin Queen, who suited up for NM State from 2018-20, was named the 2021-22 Kia NBA G League Most Valuable Player. A bonafide star for the Rio Grande Valley Vipers (the G League affiliate team for the NBA's Houston Rockets), Queen helped the Vipers lay claim to the top seed in the NBA G League's Western Conference ahead of the playoffs.

The Glen Burnie, Md., product has netted 10 or more points in each of the 19 games he has taken part in for the Vipers this season. Queen wrapped up the regular season with 14 games of 20 or more points, five 30+ point games and a air of tilts with over 40 points. He posted a pair of double-doubles for the best team in the G League's Western Conference, too.

Queen's return to the Rockets' organization came on the heels of a highly-productive stint on the Los Angeles Lakers' NBA Summer League squad. He averaged 13.2 points and 2.0 steals per game on the Lakers' Summer League club to earn a spot on the training camp roster for the 17-time world champions. One of the final players waived by the Lakers prior to the start of the NBA's 2021-22 regular-season, Queen came back to the Vipers where he emerged as a strong two-way player for them and the Rockets.

One of the most exciting players to ever suit up for the Aggies, Queen helped NM State go 55-11 (.833) during his two-year stint in Las Cruces. That record included an incredible 31-1 (.969) mark in Western Athletic Conference (WAC) regular season games and as a result the Aggies picked up a pair of WAC regular season titles and the only available WAC Tournament crown during that stretch.

Individually, Queen topped the Aggies' charts in scoring (13.2 ppg) and minutes per game (27.5) during the 2019-20 campaign. In addition to that, the guard submitted averages of 5.2 rebounds, 2.4 assists and 1.7 steals per game while putting up shooting splits of .471/.387/.814. That allowed Queen to earn All-WAC Second Team, NABC District Six Second Team and USBWA All-District VIII Team laurels at the conclusion of the campaign.

Beginning his career as a spark plug off of the bench for the Aggies in 2018-19, Queen's path toward NM State stardom began in the 2019 WAC Tournament title bout with third-seeded Grand Canyon with a trip to the NCAA Tournament on the line. Queen caught fire, erupting for an NM State career-best 27 points to help the Aggies rip the Lopes. As a result, he was named the WAC Tournament's Most Valuable Player.

With Queen on their side in 2019-20, NM State put up the first 16-0 run through WAC play in the history of the league which was a large part of the 19-game winning streak the Aggies embarked on to wrap up the season.

Queen and the Vipers have their sights set on the NBA G League Playoffs as they open the post season Thursday (April 7) night against the Texas Legends at Bert Ogden Arena in Edinburg, Texas. Tip-off for the Vipers' Western Conference semifinal bout is set for 6:00 p.m. MT on ESPNews.