Four Paws and a Wake Up: Nonprofit trains service dogs to donate to veterans

Dogs learn to turn off lights, pick up cell phones 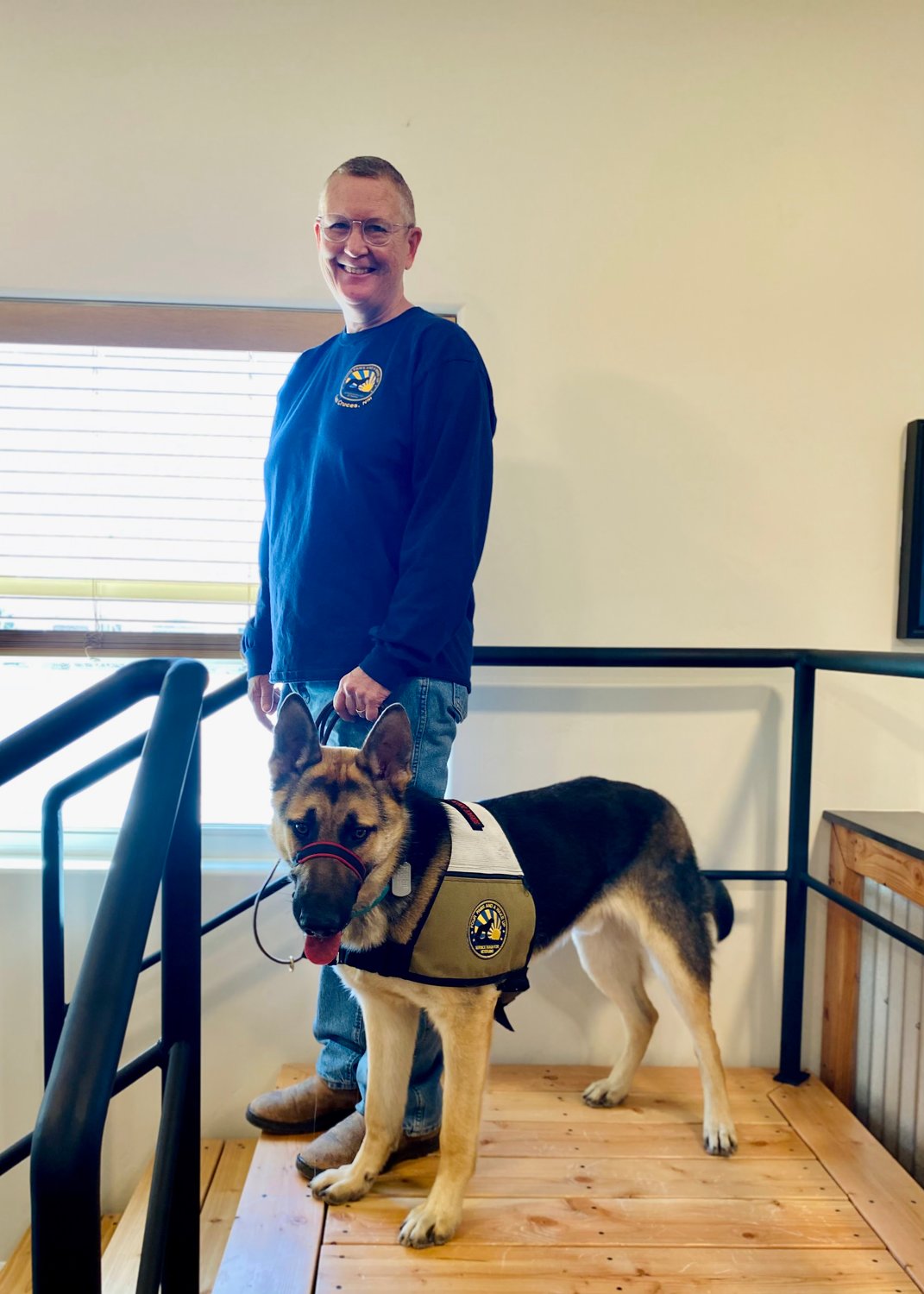 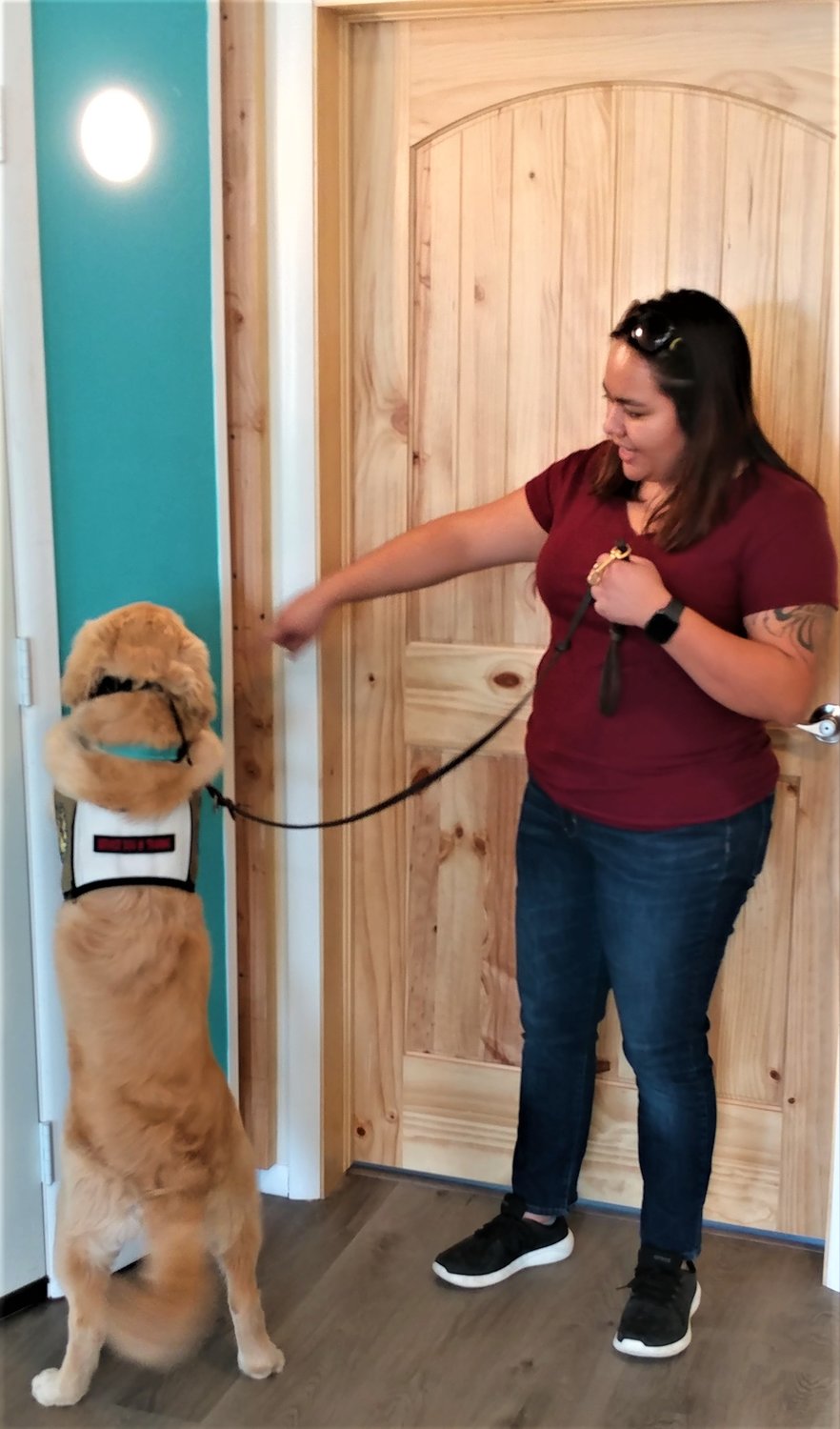 With trainer Aly De La O, CB knows how to turn a light off and on.
Bulletin photo by Mike Cook

Four Paws and a Wake Up, Inc. in Fairacres.
Bulletin Photo by Mike Cook 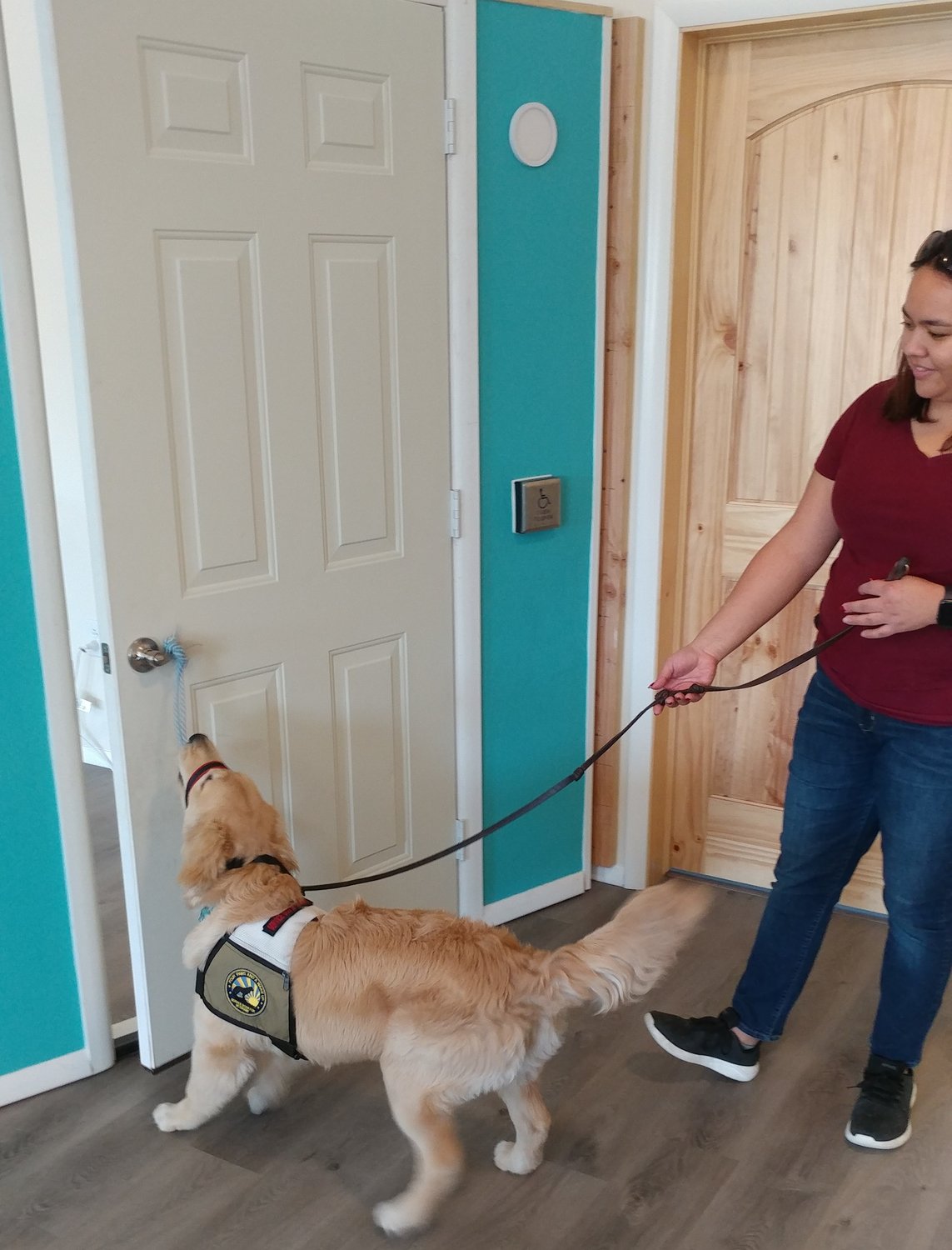 With trainer Aly De La O, golden retriever CB is learning to open and close doors. She uses her nose to close the door, so it doesn’t get scratched.
Bulletin photo by Mike Cook 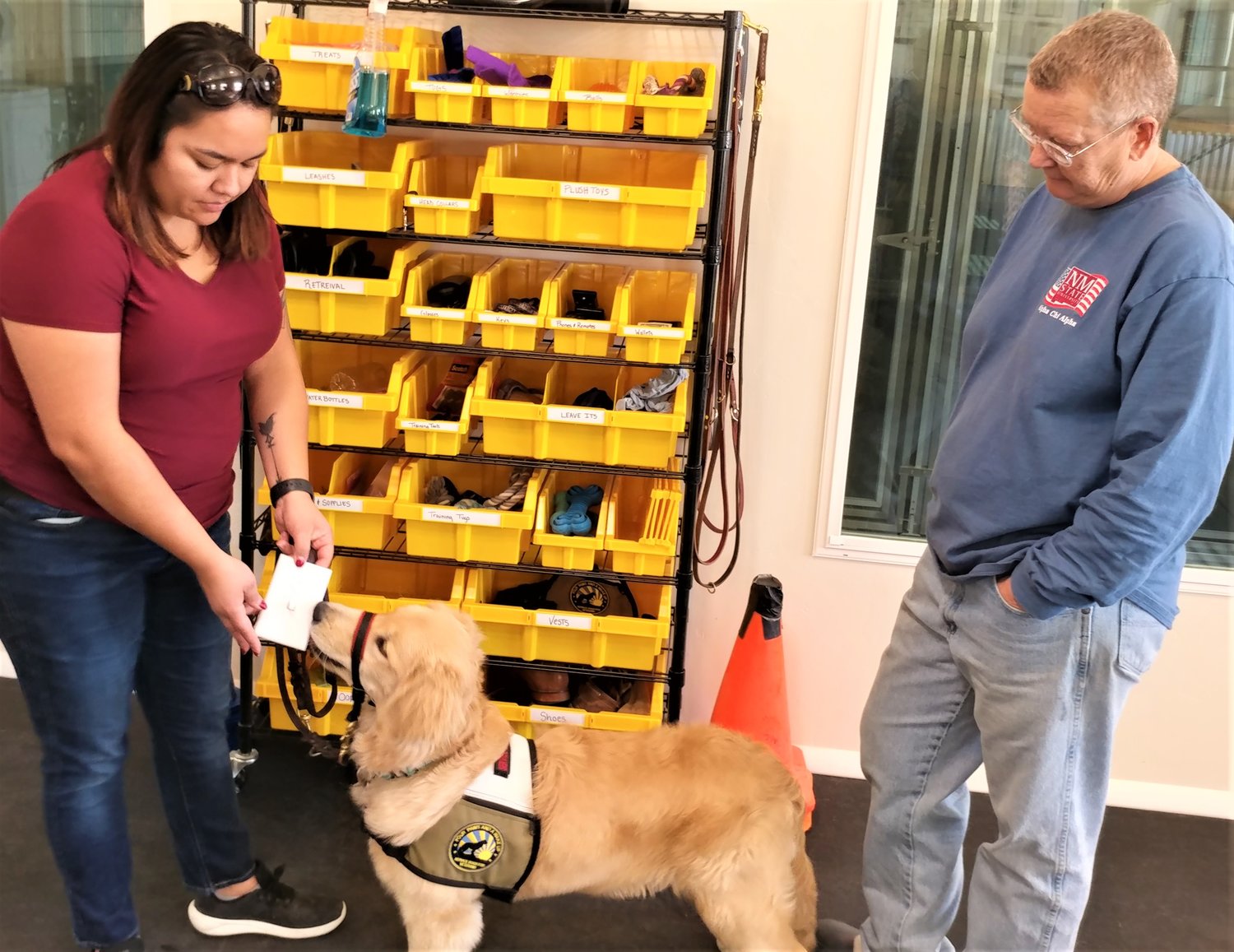 As Four Paws and a Wake Up, Inc. owner Andrea Joseph looks on, trainer Aly De La O helps CB get to know what a light switch feels and smells like. The large windows in back will allow dogs in kennels to watch and learn as other dogs are trained.
Bulletin photo by Mike Cook 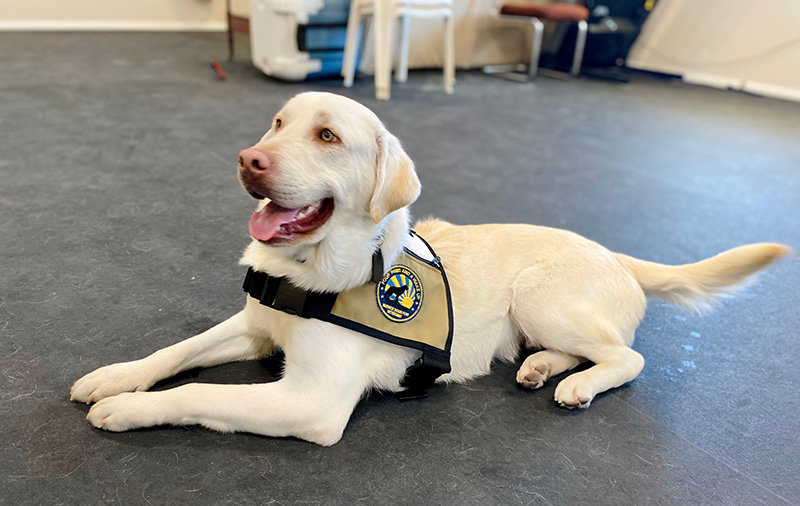 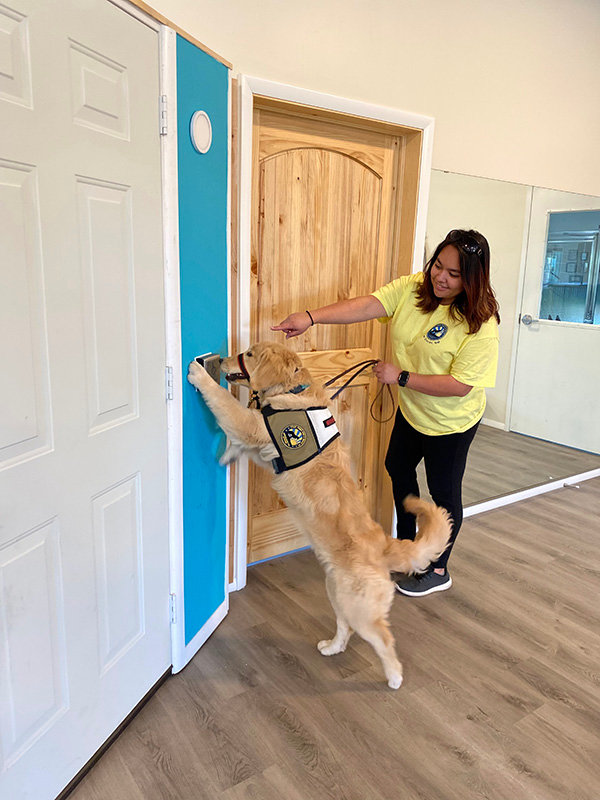 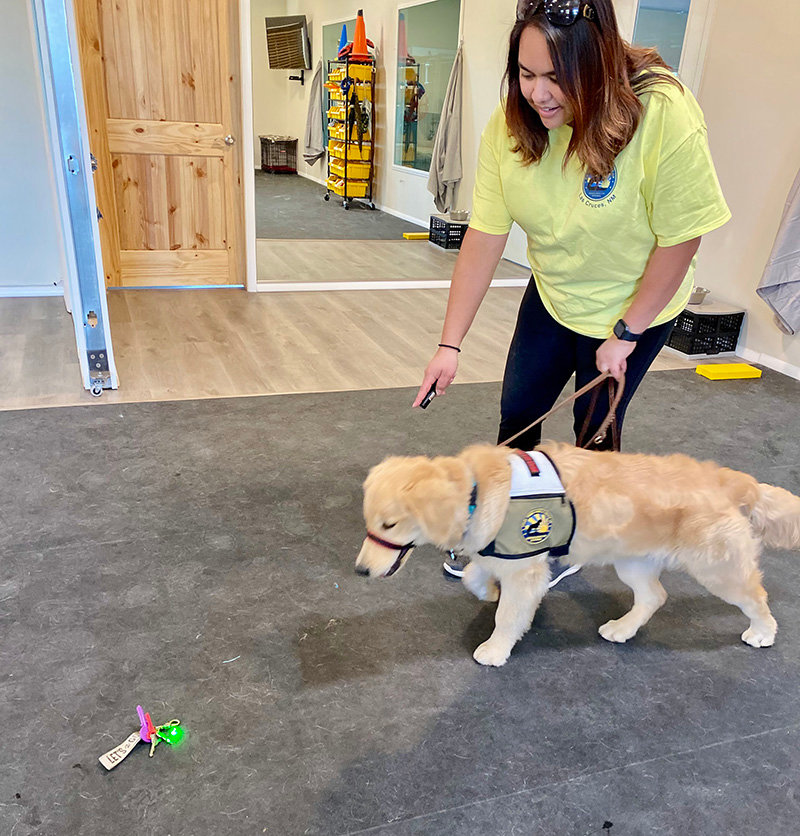 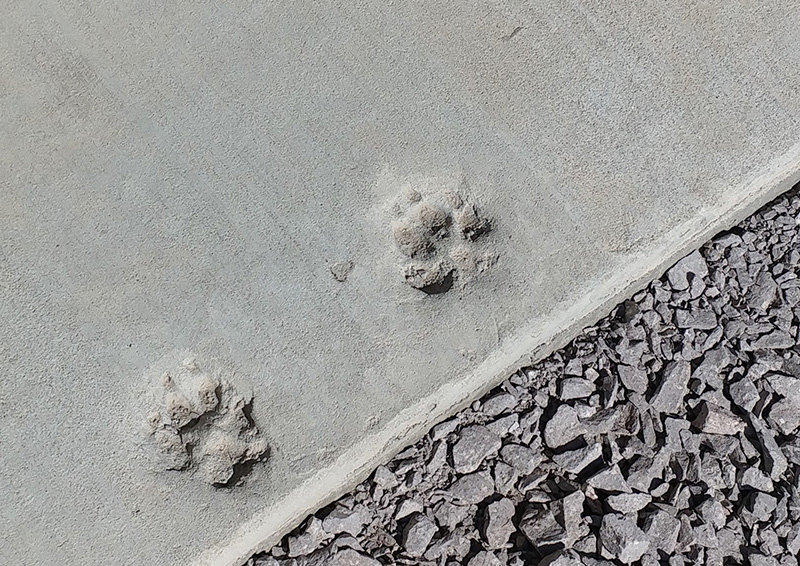 CB, a 7-month-old golden retriever, can open a latched door, and she also can close it with her nose, so the door doesn’t get scratched. CB can turn a light on and off, pull a laundry basket across the room and pick up cell phones, wallets and keys in response to verbal commands, hand signals and laser pointers. And she’s still got a lot more to learn at Four Paws and A Wake Up, Inc.

CB belongs to Four Paws founder and owner Andrea Joseph, who has just opened the nonprofit training facility on a quiet street in Fairacres.

Joseph has space for nine dogs in the 4,000-plus square foot building, and she and trainer Aly De La O have already rescued a 13-month-old German shepherd from the Animal Services Center of the Mesilla Valley to begin Four Paws’ 12- to 24-month training program, with more dogs to follow.

Graduates of the program will be donated free of charge to local veterans to be used as service dogs, Joseph said. Dogs, who begin receiving the training but are deemed unsuitable for service, will be made available for adoption as companion animals, Joseph said.

In addition to the skills CB has already learned, she and other participating dogs will be trained to assist veterans suffering from PTSD, including panic attacks and flashbacks, Joseph said. By mid-February, the program had enrolled Axel, a German Shepherd, and Bennett, a Lab.

Dogs will be trained to recognize a “tell” from their owners that an episode has begun. A dog will then respond by nudging the human or licking his or her face – “whatever it takes to keep the vet in present time,” Joseph said. If the vet is having a nightmare, the dog will be trained to turn on a light or pull a bedspread or blanket off the bed to gently awaken the sufferer.

Dogs also will be trained to pull a wheelchair, open a refrigerator, load a washing machine (including top loaders), move clothes from the washer to the dryer and unload the dryer.

“If only we could train them to fold,” Joseph said.

They also will receive “lot of socialization,” she said, including outings to New Mexico State University, for example, so they can become familiar with pedestrians, motorized vehicles, skateboards, bicycles, street noises and much more.

The dogs will also be taught how to behave in a restaurant (lying under the table), on an airplane and even following behind a firetruck in a parade.

There’s even a wall in the training room at Four Paws with different hats hung on it for people to wear to help dogs become familiar with a wide range of human appearances and behaviors. And, since Joseph’s property in Fairacres is surrounded by other animals, the dogs will be familiar with horses, chickens, goats and cows.

“For puppies, we will use martini shakers with animal fur/hair inside to start desensitizing them to different animal smells,” Joseph said.

“We’ve tried to think of all the scenarios,” she said.

Dogs are also trained to walk on a treadmill, Joseph said, since their owners may be in wheelchairs or otherwise physically handicapped and unable to provide them with outdoor exercise.

The last several weeks of training will include the veteran who will be the dog’s new owner, she said. Vets will be selected through an application process, pairing human needs with canine strengths.

The goal will be to “give as much independence as possible” to each veteran who receives a dog, Joseph said.

The meaning of the “Four Paws” part of the nonprofit’s name is obvious. The “Wake Up” refers to the last day a veteran is on a particular deployment, Joseph said.

“The ‘wake up’ for this program is the new life that begins after a veteran receives a service dog,” she said.

In addition to the training, Joseph is reaching out to local veterans organizations to let them know about the program, and she hopes to interest schools and others as well.

Joseph said Four Paws will rely on donations, grants and fundraising for its funding, and welcomes donations of any amount.

The nonprofit has a Paws on Parade fundraiser scheduled for Saturday, April 9, at Young Park, 850 S. Walnut St. in Las Cruces. The event will include an inaugural community dog walk, with registration beginning at 10 a.m. and the parade beginning at 11 a.m. It will also include a service-dog demonstration, an obstacle course, food and games. All donations will benefit Four Paws and a Wake Up, Inc.

Pre-registration is requested to participate in the parade. Call 575-524-4444 and visit k94paws.org.

Contact Joseph at the phone number above and at ajoseph@k94paws.org.

Joseph also welcomes the donation of noisemakers and other devices to help train dogs.