Interactive exhibit at NMSU to raise awareness about violence and abuse 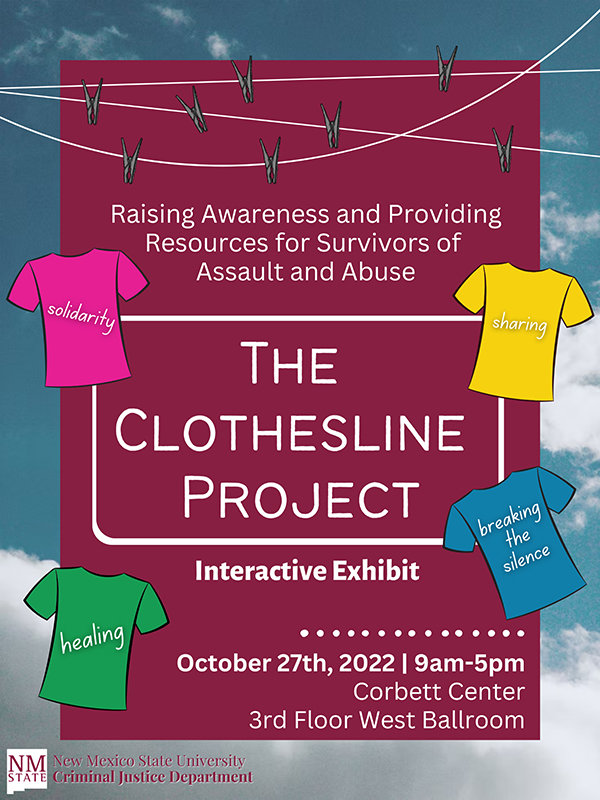 NMSU's Department of Criminal Justice is presenting the "Clothesline Project," an interactive exhibit to raise awareness about violence and abuse from 9 a.m. to 5 p.m. Thursday, Oct. 27 in the 3rd floor West Ballroom at Corbett Center.
Courtesy image 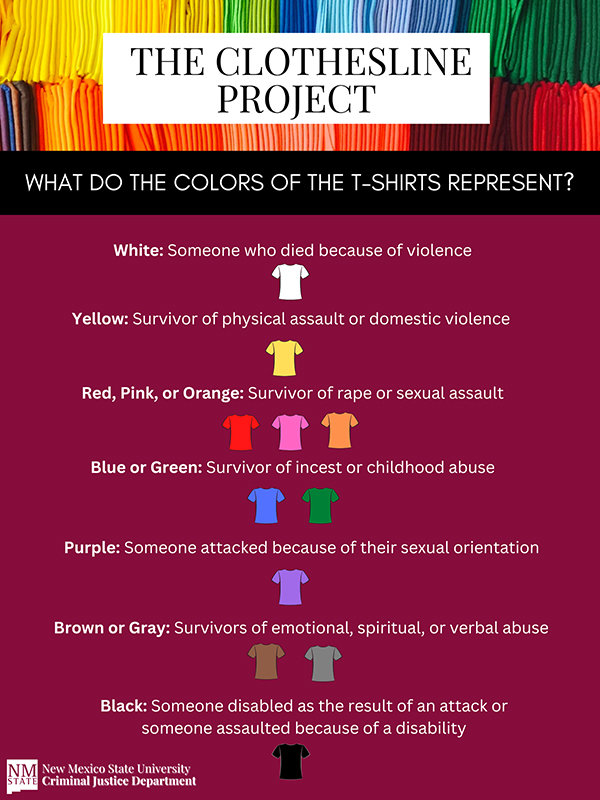 Different colors represent different forms of abuse victims and survivors may have gone through. The exhibit will display the colorful t-shirts with powerful messages and illustrations created by survivors, friends and family of victims of violence and abuse.
Courtesy image
Previous Next
Posted Tuesday, October 25, 2022 9:32 am
NMSU News Release

About 41% of women and 26% of men in America experience what the Centers for Disease Control defines as intimate partner violence: sexual violence, physical violence and/or stalking by an intimate partner. National crime data reported by the CDC shows that more than half of female homicide victims reported in the United States are killed by a current or former male intimate partner.

New Mexico State University's Department of Criminal Justice is raising awareness about violence and abuse through the “Clothesline Project.” The interactive exhibit is a display of colorful t-shirts with powerful messages and illustrations created by survivors, friends and family of victims of violence and abuse. The exhibition is open from 9 a.m. to 5 p.m. Thursday, Oct. 27 in the 3rd floor West Ballroom at Corbett Center. The exhibit is free and open to the NMSU community.

In addition, t-shirts, markers and instructions will be provided to the first 200 participants who wish to create a shirt. The shirts will be hung up for people to walk through and see the messages created by survivors or friends of survivors.

“The theme of the campaign is breaking the silence,” NMSU criminal justice assistant professor Ahram Cho said. “The campaign is to raise our voice about violent victimization and abuse. We want to discuss the impact on the victims, their friends, family and the community. In doing so I hope that we can provide safe and supportive environment for our students and the Las Cruces community.”

The "Clothesline Project" began in 1990 in Massachusetts when a member of the Cape Cod Women’s Defense Agenda learned that during the Vietnam War 58,000 soldiers were killed and during that same time span 51,000 women in the U.S. were killed by their partners. Inspired by the AIDS quilt, the group started an exhibition, hanging color-coded t-shirts on a clothesline in public to raise awareness about these statistics and domestic violence in general.

Since then, the "Clothesline Project" has spread to universities and cities around the world. NMSU last participated in 2016.

“Our goal is not only to increase awareness of the impact of violence and abuse within the NMSU and Las Cruces community, but also to highlight the strength and resiliency of survivors,” Cho said. “Since October is domestic violence awareness month, we decided to join this international campaign to share support, encouragement, and resources for survivors and NMSU students broadly.”

Seventeen organizations from NMSU and the Las Cruces community including the New Mexico Office of the Attorney General, New Mexico State Police, La Piñon and La Casa will be on hand to provide resources for victims, survivors and family members.

“Previous studies showed almost 50% of college students experience some form of unwanted sexual contact,” Cho said. “I hope this campaign helps to promote awareness, solidarity, and healing for our students and to break the taboo and silence that surround violence and abuse experiences.”

"I want them to know it is not uncommon. They do not need to blame themselves or be ashamed of the experiences they had. What they experienced was wrong and it was not their fault.”