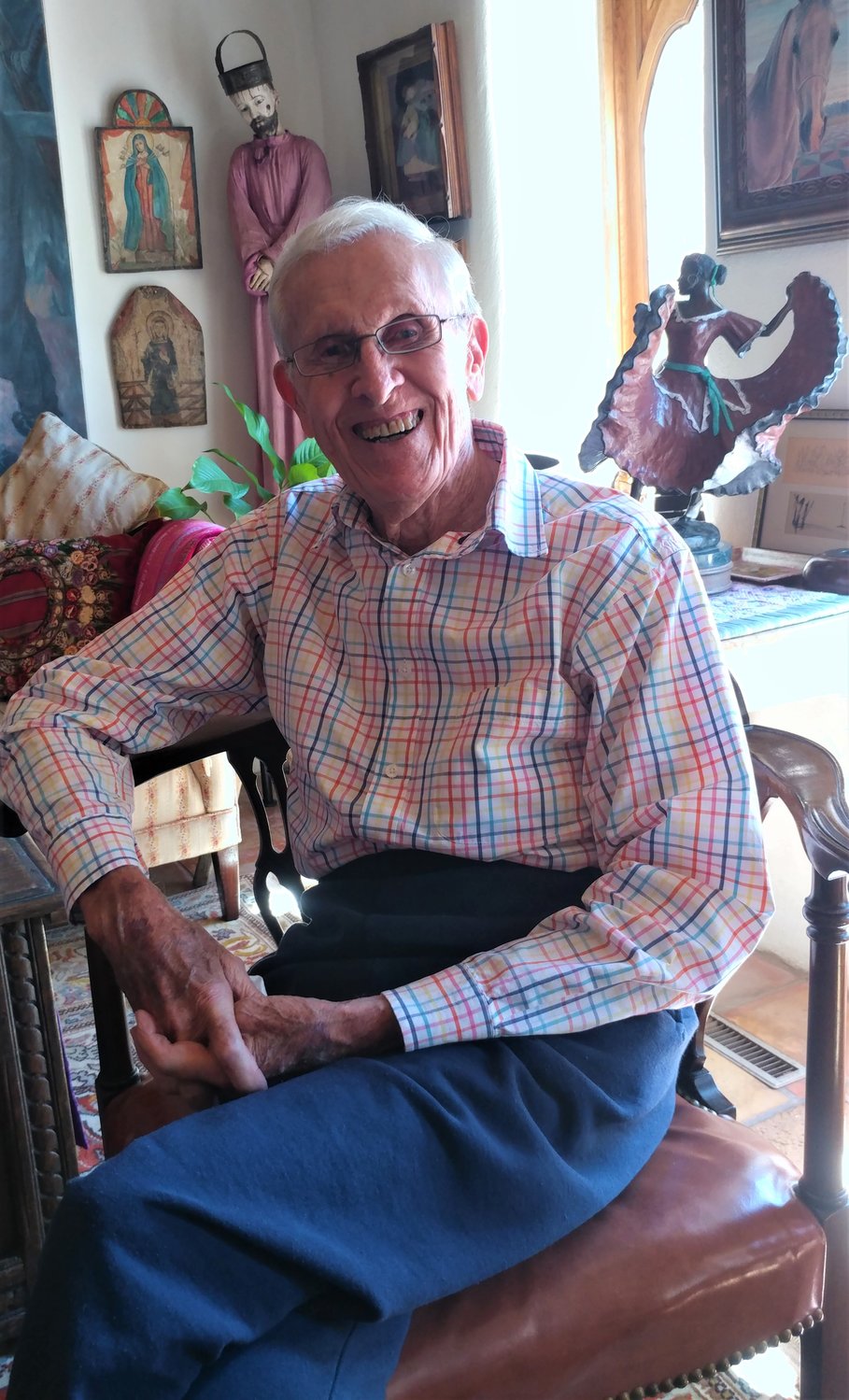 The long-time educator and legislator was born Aug. 24, 1920, in Chamberino, New Mexico, grew up on a farm and attended a small county school there, graduating from the eighth grade with four other students.

“I was a country boy,” Taylor said. His mother was Hispanic and from Mexico and his father was an Irish American born in Texas.

Today, Taylor continues to live in the home he has owned on the Mesilla plaza since. He maintains a strong interest in politics at all levels and travels to Santa Fe every other month as a member of the Museum of New Mexico Board of Directors.

“I feel ancient,” Taylor said, reflecting on nearly a century of life. “I can’t ambulate without a walker or a wheelchair.” But he continues to be surrounded and supported by a loving family and community. He and his wife, Mary, who died in 2005, raised seven children. His 5,000-square-foot home, built in 1858, contains art and artifacts dating to the 18th century, said Leslie Bergloff, manager of the Mesilla state Historic Site that includes the Taylor home.

Taylor, who spent 18 years in the New Mexico House of Representatives, retiring in 2005, said Gov. Michelle Lujan Grisham is “a really nice person. She’s a very credible girl,” said Taylor, who served on the House Education, Finance and Health and Human Services committees.

Taylor said he envies current legislators because of the state’s record revenue. “We had to scrimp on a whole lot of things and be very frugal,” he said. “At the same time, I felt a great deal was done.”

At one point during his service in the legislature, Taylor sued then Gov. Gary Johnson because of a welfare reform proposal. The case was decided in Taylor’s favor by the New Mexico Supreme Court. In spite of the disagreement, Taylor, a Democrat, and Johnson, a Republican, remained friends.

Taylor actually has strong ties to both major political parties in New Mexico. His mother's grandfather was Miguel Romero y Baca (1798-1880), who met Abraham Lincoln and helped start the Republican Party in New Mexico. His son, Trinidad Romero (1835-1918), was elected as a delegate to Congress representing the Territory of New Mexico 1877-79 and later was appointed a U.S. marshal by Republican President Benjamin Harrison. Taylor’s mother’s family had come to New Mexico with the Oñate expedition in 1598.

Taylor said his biggest concern throughout his legislative service “was for the poor, sick, and hungry.” He was often called “the Conscience of the Legislature.”

As a Mesilla resident, Taylor won’t get to vote in the hotly contested Las Cruces mayor’s race, but said he thinks ranked-choice voting, which Las Cruces will use in city elections this November for the first time ever, is a good thing. “In the long run, it’s going to be the way to go,” said Taylor, who defeated incumbent Republican Patricia Dominguez in a close race to claim the District 33 House seat in 1986 and was often unopposed for re-election thereafter.

“I follow very closely what’s going on,” he said. “I am amazed and I am concerned.” Nationally, he said, “It’s about Trump. I’m concerned about the future. I hope that we can have a steady hand and a more thoughtful hand.”

“There are several good candidates” among the large crop of Democratic presidential hopefuls,” Taylor said, including former U.S. Rep. Beto O’Rourke of El Paso. Democrats need to “find a really good candidate to repair the wreckage that has been done,” Taylor said.

Taylor opposes Trump’s plan for a wall between the U.S. and Mexico, citing close ties between families and organizations in the two countries and remembering an exchange program he set up between teachers in Las Cruces and Cuidad Juarez. (Taylor was instrumental in in starting Las Cruces Public Schools’ bilingual and migrant education programs.) “I still carry in my thoughts and in my heart a little speech” given by a fifth-grade student from Juarez offering condolences from Mexico following the November 1963 assassination of President John F. Kennedy, he said. “I think those relationships are just so important.”

Taylor said he has followed the plight of asylum seekers making the journey from Central America to the U.S.-Mexico border through the work of his grandson, a photojournalist, who “paints a picture of the tragedy of those families who are disregarded by many after having traveled from Central America.”

Taylor said his father’s family was divided by the Civil War. His grandfather left the family conflict behind in Missouri and moved to El Paso in 1864, opening a small store and working for the railroad.

From the horse-drawn carts of the Oñate expedition to the coming of the railroad nearly 200 years later to the historic plaza that is at the heart of Mesilla-Las Cruces, Taylor’s family has “lived the whole story of the settlement of New Mexico in a very personal way,” Bergloff said.