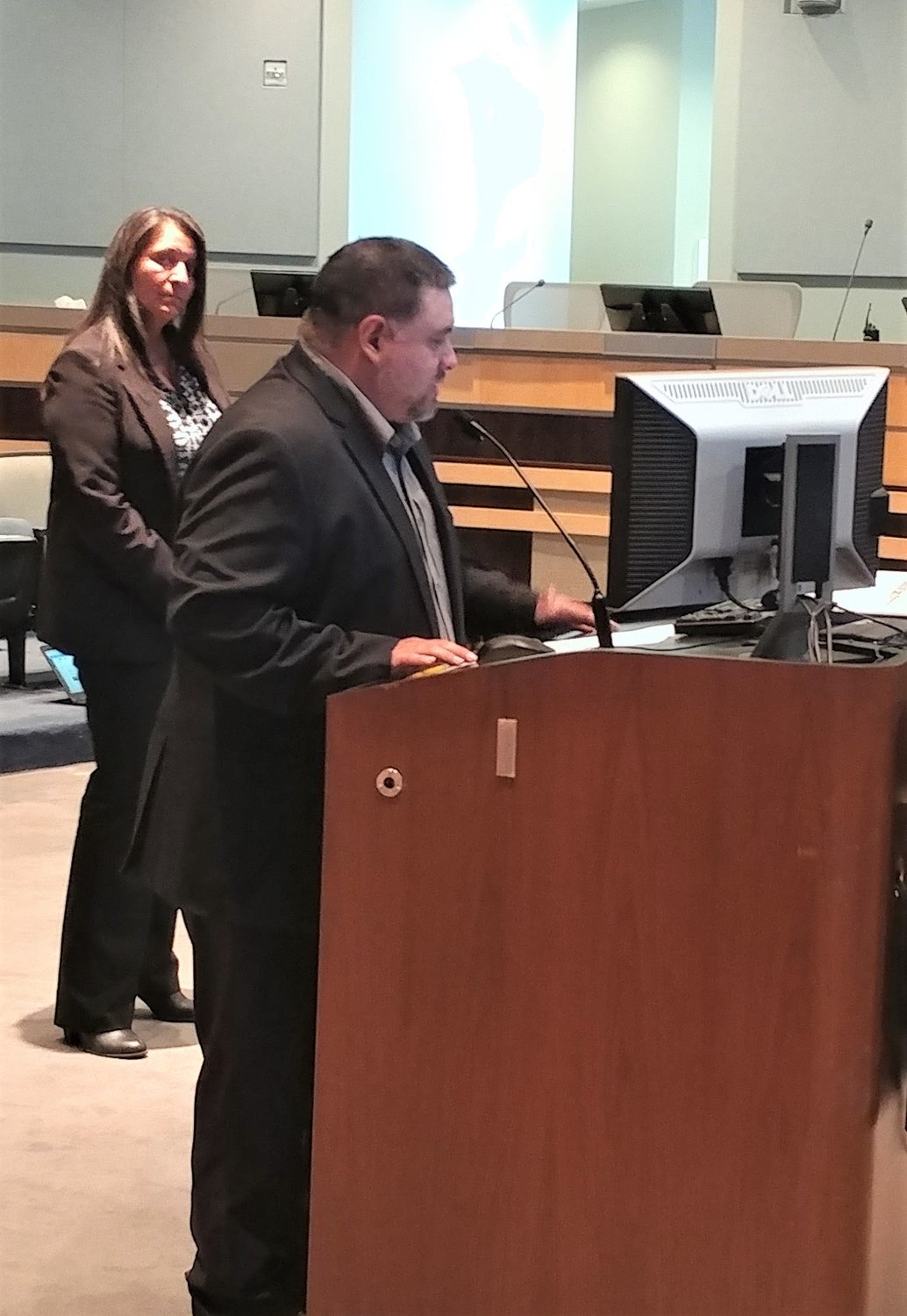 As City of Las Cruces Parks and Recreation Department Director Sonya Delgado looks on, city Parks Director Franco Granillo talks to the city council and city staff about a proposed ban on the use of glyphosate. The discussion and a vote to ban the herbicide came at the council’s Aug. 19 regular meeting.
Bulletin photo by Mike Cook
Previous Next
Posted Wednesday, August 28, 2019 12:09 pm
By Mike Cook

LAS CRUCES - The Las Cruces City Council has voted to ban the use of the herbicide glyphosate – the principal ingredient in Roundup – for pest control on city property.

The vote came at the council’s Monday, Aug. 19 regular meeting, when it also approved a resolution to appoint an ad hoc committee to help the city develop and implement an integrated pest management (IPM) policy.

The ban will be effective for city employees and contractors and will take effect when the city’s current supply of glyphosate has been exhausted, according to city documents. Mayor Ken Miyagishima, Mayor Pro Tem Gill Sorg and Councilors Kasandra Gandara, Greg Smith and Yvonne Flores voted in favor of the ban. Councilor Jack Eakman voted against it. Councilor Gabe Vasquez did not attend the meeting. Eakman had earlier moved to table the resolution indefinitely, saying the city didn’t know what the economic impact of banning glyphosate would be. That amendment was defeated on 4-2 vote.

With the ban on glyphosate, which some studies have shown may cause cancer, city staff will continue to research and use a range of long-term strategies to control pests while protecting human health and the environment, to present to the committee, the city said.

“We have to change the way we do things across the board,” Bixby said, “and change is difficult.”

The city should take a holistic and more conservative approach to pest management that protects public health, Steinborn said.

Doña Ana Communities United Executive Director Kari Bachman questioned why it is taking the city so long to develop an IPM policy and said appointing an ad hoc committee to study it is a step back. “We’ve been asking for some answers for a long time,” Bachman said. “The plan needs to be developed. I’m just wondering why we’re continuing to move this off into the future.”

Four members of the staff of La Semilla Food Center also spoke in favor of the ban, including Director of Operations and Policy Advocacy Krysten Aguilar, who said there are “many, many safe alternatives to glyphosate.” Also speaking in favor of the ban was DACU Social Equity Mapping Coordinator Enrique Solis, who said banning glyphosate “is a step in the right direction.”

Leave these 6 phrases behind to sound more confident over email

Year of the quarterback carousel: A look back at the NFL's record number of starting quarterbacks in 2022

Where could pro sports expand next? 12 cities that are ripe for new teams