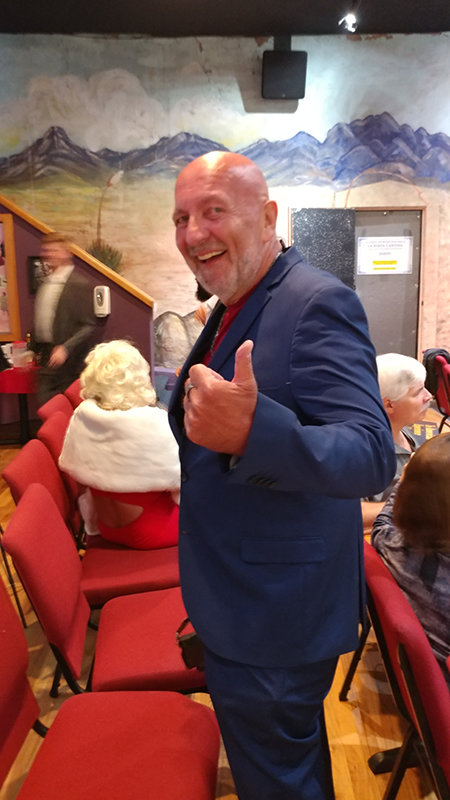 Filmmaker Manfred Schreyer during the premiere of “The American Experience 2021” at the Fountain Theatre in Mesilla.
Bulletin photo by Mike Cook
Posted Wednesday, October 12, 2022 4:38 pm
By Mike Cook

Las Cruces photographer and filmmaker Manfred Schreyer premiered his film “The American Experience 2021” to an enthusiastic crowd at the Fountain Theatre in Mesilla in late September.

“What do people actually know and what do we hold as the truth?” Schreyer asked at the event. “There is no objective truth. So how do we arrive at truth? What knowledge do we have as Americans?”

The film includes Schreyer’s questions about Covid-19, politics, history and business to average citizens in Las Cruces and as far away as New York City, New Orleans, as he traveled 19,000 miles across 48 states in 10 months in 2021 to shoot the film and collect photographs “of people, circumstances, landscapes, etc. of our nation” for his book with the same name as the movie.

Going forward, Schreyer said he is exploring a number of options for his documentary, including negotiating with a professional movie/cinema distributor and submitting the film to a clearing house that will then distribute it to streaming services.

A native of Germany, Schreyer was a high school exchange student to the U.S. in 1975-76 and immigrated here in 1984. He moved to Las Cruces from Ohio more than four years ago.

A freelance photojournalist and web designer, Schreyer is the creator of Mirage Art Photography. He has visited 46 countries around the world and has worked in many of its major cities.