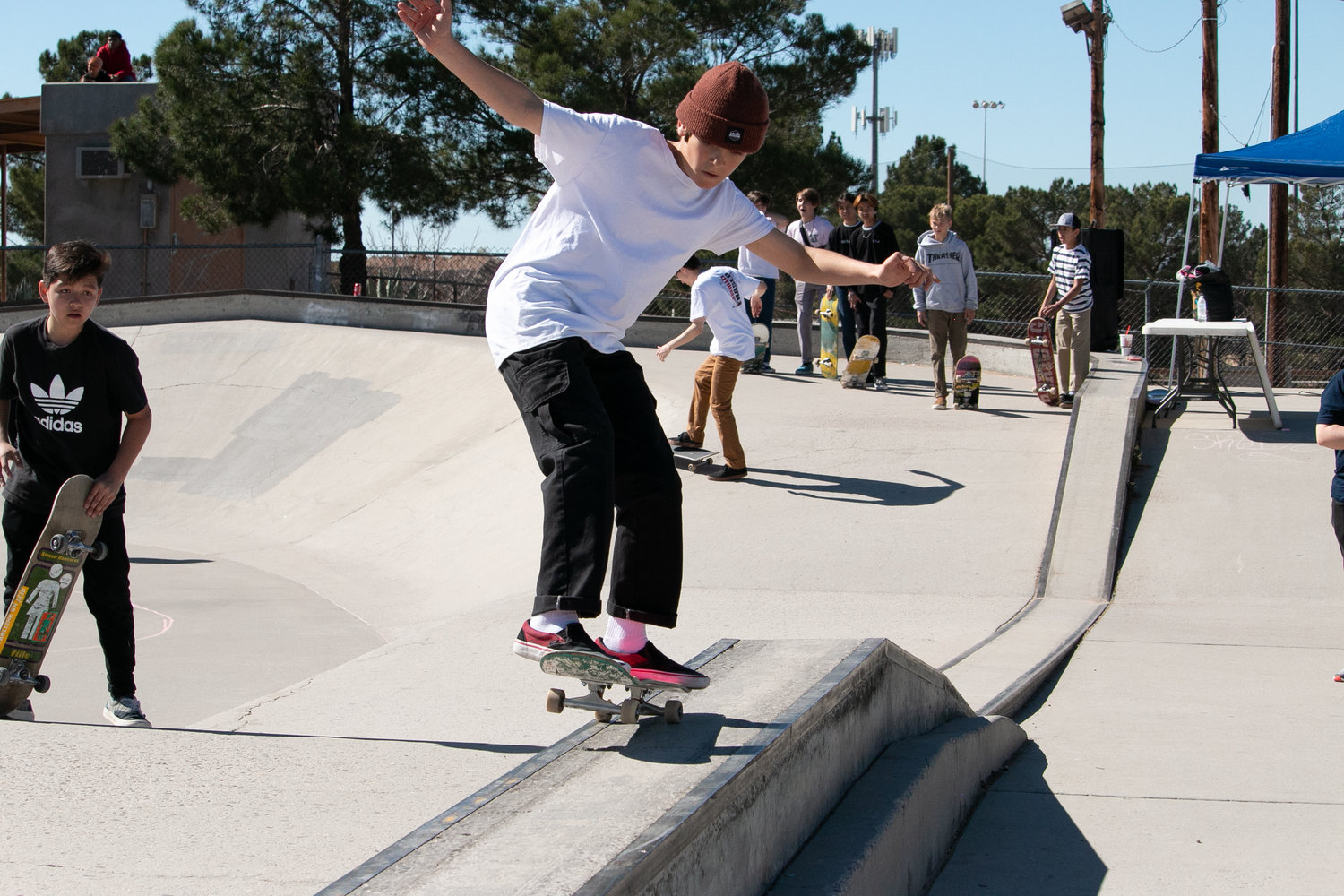 Rowan Langle of Las Cruces participates in the intermediate division skate-off at Feb. 9’s ‘Legiskative’ event, which drew a crowd of about upwards of 100 participants and spectators.
PHOTO BY ZENO MUNCRIEF FOR THE BULLETIN
Posted Friday, February 14, 2020 3:59 pm
By Jess Williams

Nick Lassiter has a passion for skateboarding and a plan to help the City of Las Cruces fund and build a new facility for skateboarders.

On Saturday, Feb. 9, he hosted an awareness event at the Las Cruces Skate Park, where District 3 City Councilor Gabe Vasquez announced that legislative funding has been approved to improve the existing park and begin planning for a new and better skate park. The ‘Legiskative’ awareness event drew dozens of people to the park for the afternoon.

While it is used frequently, Lassiter said the current skate park east of the Meersheidt Center is not of very good quality and lacks some essential features and obstacles that would attract more use.

To that end, he started an Instagram page and named it the Las Cruces Skatepark Coalition (@lcsk8parkcoalition) in order to create awareness for the existing park’s shortcomings and to move toward building something new.

He soon teamed with Michael Jimenez, who shared his vision and had been meeting with city staff about the matter. Jimenez had experience in making Alamogordo’s skatepark implemented, and he quickly joined forced with Lassiter to offer advice and guidance.

The two met with city staff last March and began working to gin up additional public support. Petitions were circulated and meetings were held throughout the year with individual city councilors to bring them on board.

Their efforts resulted in the city adding the project – budgeted at $3 million – to its Infrastructure Capital Improvement Plan, which was forwarded to the New Mexico Legislature for funding consideration, with the support of Rep. Angelica Rubio, D-District 35.

Lassiter and Jimenez were joined by skateboard-park advocates Michael Radkey, Mina Smith, Steven Linares, Phillip Huerta and Izel Zapata for a Jan. 22 trip to Santa Fe to lobby additional legislators for the funding.

Lassiter said Saturday’s event was a celebration of the work done and the strides made.

“We had a lot of people show up,” he said. “Luchador food truck showed up, bands played, voter registration happened, and live painting went down during the jam.”