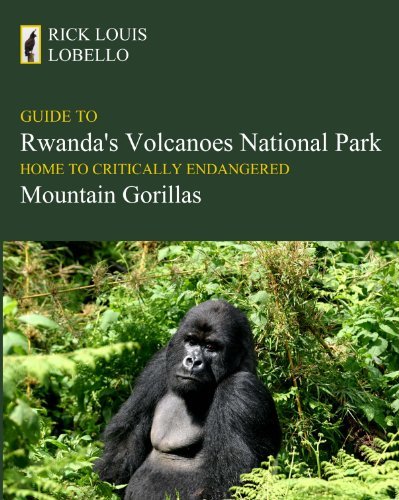 El Paso author and educator Rick LoBello will lead a Zoom presentation about mountain gorillas, which have been his passion for more than 50 years.

The presentation will begin at 1 p.m. Saturday, June 5.

There is no charge to participate.

LoBello will be joined by Judy Chidester of Las Cruces, who worked for the U.S. State Department in Rwanda, which is the home of Volcanoes National Park where famed American primatologist Dian Fossey lived and worked, 1967-85, to protect mountain gorillas.

LoBello said Chidester met Fossey and was a caregiver for an orphaned mountain gorilla Fossey was hoping to reintroduce into the wild.

The Zoom presentation will be live from Chidester’s Las Cruces home.

Register to attend the Zoom presentation at ricklobello.com.

El Paso author Rick LoBello acknowledges that he is probably the area’s “only active advocate for the preservation of mountain gorillas.”

His dream is to build a conservation and education center in the El Paso-Las Cruces area devoted to the endangered species that is native to central Africa.

“Mountain gorillas are just so fascinating,” LoBello said. “They’re so much like us. Their family structure is so humanlike.”

LoBello, who grew up near Buffalo in western New York state, became interested in mountain gorillas while reading about them in his high-school library. He particularly remembers a January 1970 edition of National Geographic with primatologist Dian Fosse (1932-85) and two orphan gorillas on the cover.

“That’s when I started to dream about going to Africa,” LoBello said.

He got a job at the Buffalo Zoo, which was home to a gorilla that LoBello would visit every day.

LoBello moved west to earn a degree from Sul Ross State University in Alpine, Texas, and stayed in west Texas, moving to El Paso 21 years ago.

LoBello had a long career with the National Park Service, serving as executive director of the Carlsbad Caverns-Guadalupe Mountains Association and Big Bend Natural History Association and as a park ranger at several national parks. He recently began a second career as education curator for the El Paso Zoo.

LoBello has visited Rwanda three times since 1989 and is working on the fourth revision of his “Guide to Rwanda’s Volcanoes National Park, Home to Critically Endangered Mountain Gorillas.”

The book is on the recommended reading list of the Dian Fossey Gorilla Fund (https://gorillafund.org), LoBello said.

His visits with mountain gorillas as Karisoke Research Center, which Fosse founded at Volcanoes National Park, have been life-changing experiences.

“You feel like you’re connecting with an ancient part of the Earth,” he said.

“I’m not just interested in revising my book and going back someday,” LoBello said. “I do have a vision to build a mountain gorilla education center.”

The center, which likely will cost about $1 million, he said, will help people learn about mountain gorillas and the model conservation project that has preserved them.

A daily reminder of his dream is a photo that hangs in LoBello’s El Paso office. Taken by world-renown illustrator Jay Matternes, the photo shows Fossey in her Rwanda cabin in front of a painting depicting a family of gorillas.

LoBello got a digital copy of the photo from Matternes and got his permission to hang it “so I could look at it every day to remind me of my dream to build this mountain gorilla conservation center.”