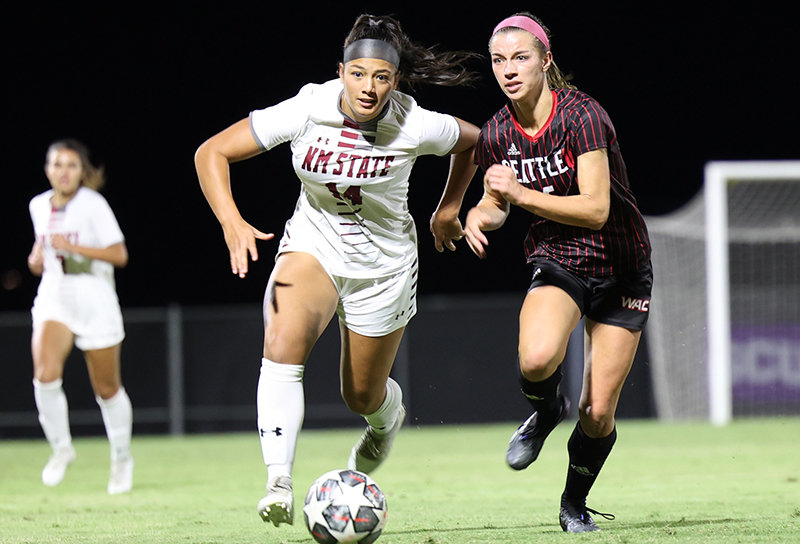 A flair for the dramatic.

That has been the M.O. for the NM State women's soccer team as of late.

The first WAC homestand of the season for the Aggies went from good to great when sophomore midfielder Loma McNeese pumped in the game-winning goal in the 88th minute, lifting her squad to a 1-0 victory over California Baptist Sunday afternoon at the NM State Soccer Athletics Complex.

SCORING SUMMARY
88' | On one of their final attacking runs of the afternoon, the Aggies were able to capitalize. Off of an attacking run by California Baptist, Mya Hammock worked the ball up past midfield and faced no opposition until she was 25 yards out. A boot from Hammock to Bella Garcia drew a pair of California Baptist defenders in and Garcia deftly kicked the ball out to a wide-open McNeese on the right wing. With almost two full seconds to set up her shot, McNeese launched a right-footed laser into the lower-left corner of the Lancers' goal to lift the Aggies to their second-straight victory.

KEY PERFORMERS/STATISTICS OF NOTE
• A defensive battle throughout, the fixture featured only 18 combined shots by the two clubs. Seven of those 18 were on target.
• NM State netminder Makenna Gottschalk stopped all four shots she faced in order to secure her third clean sheet of the season between the pipes. Gottschalk's play in the final 20 seconds loomed large, too. The last of four California Baptist corner kicks occurred with 17 seconds to go, but Gottschalk got to the soaring ball first and punched it out of harm's way twice. A last-chance shot by the Lancers went wide, allowing NM State to lock up the win.
• NM State outshot California Baptist by a 10-8 margin and the corner kicks were even at four for each club.
• NM State's win Sunday marked the program's first triumph over California Baptist. Coming into Sunday's showdown, NM State possessed an 0-4 all-time record against the Lancers and had been outscored 9-2 by them.
• For the first time this season, NM State has won consecutive WAC games. The Aggies won consecutive WAC regular season matches just one last season and are just one win away from matching the program record for WAC regular season victories in a single season with six tilts to go.
• Devyn Kelsey and Karley Weeks each generated a trio of shots in the match. That duo combined to total three of the Lancers' four shots on goal.