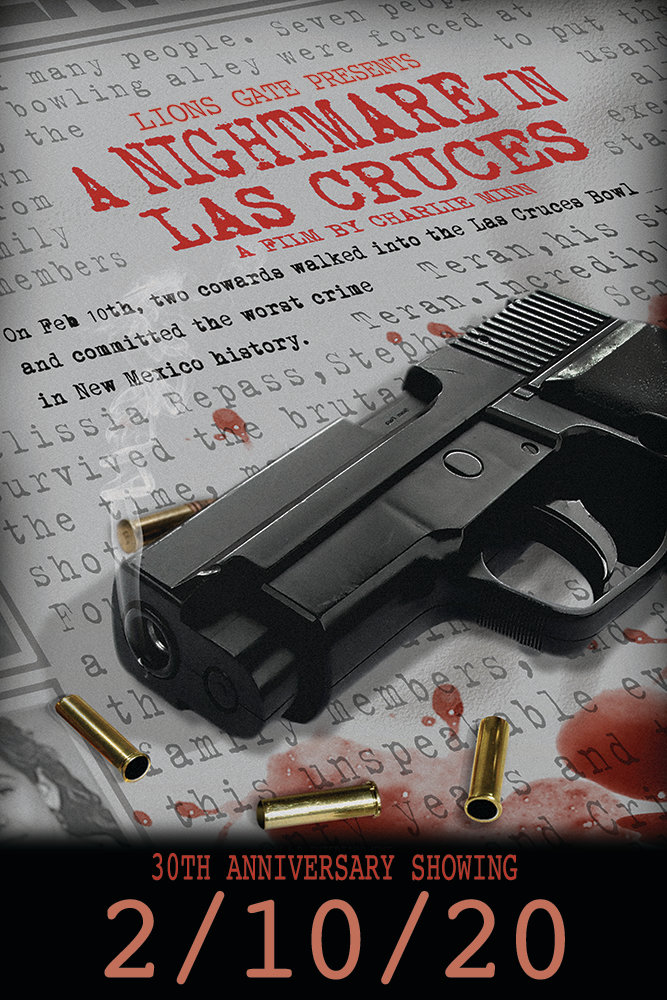 “A Nightmare in Las Cruces,” documentary film directed by Charlie Minn, is being rereleased on the occasion of the 30th anniversary of the Las Cruces bowling alley murders with new interviews included. 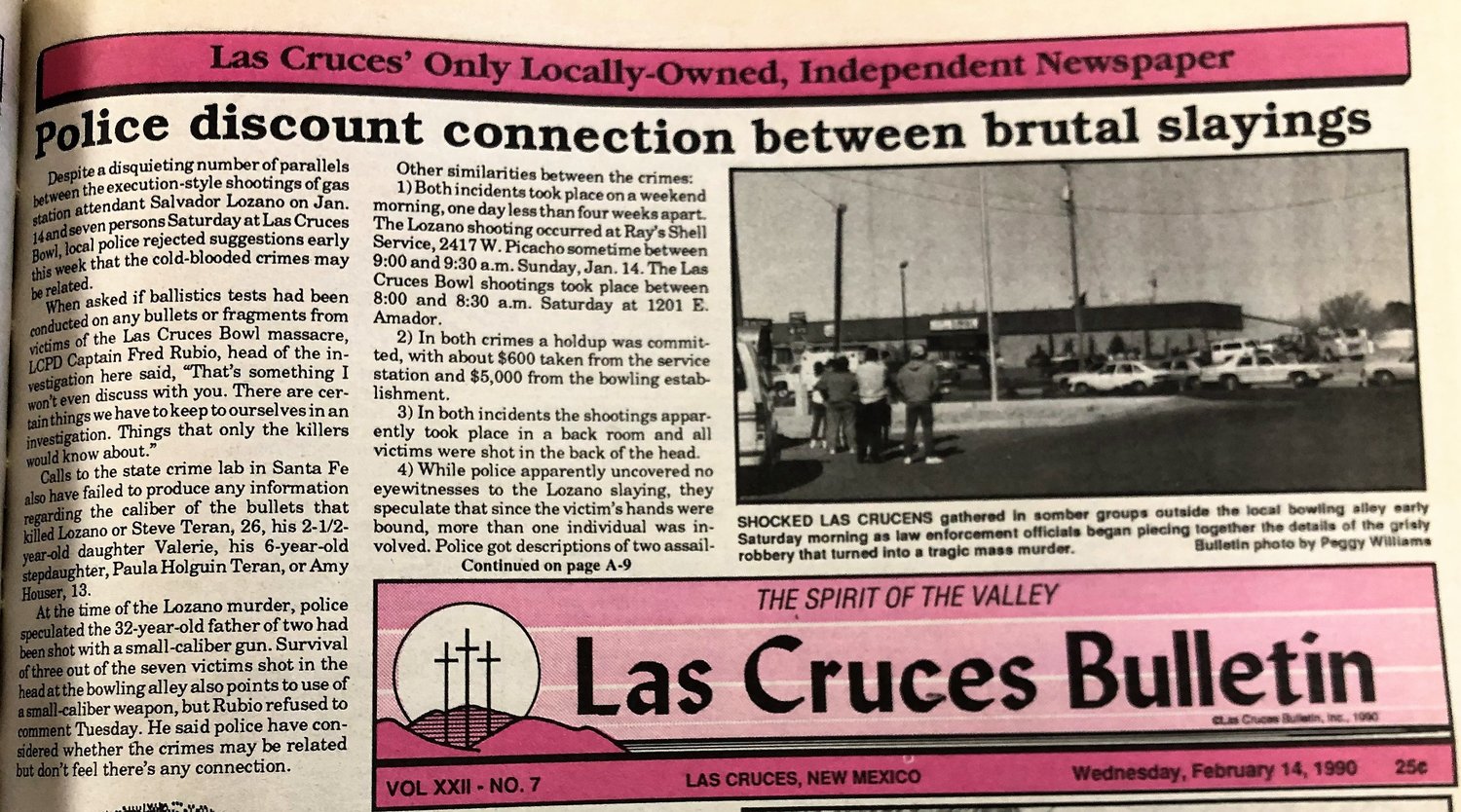 Some of the biggest headlines across Las Cruces continued through the year as investigators looked into the shootings of seven people at a local bowling alley. 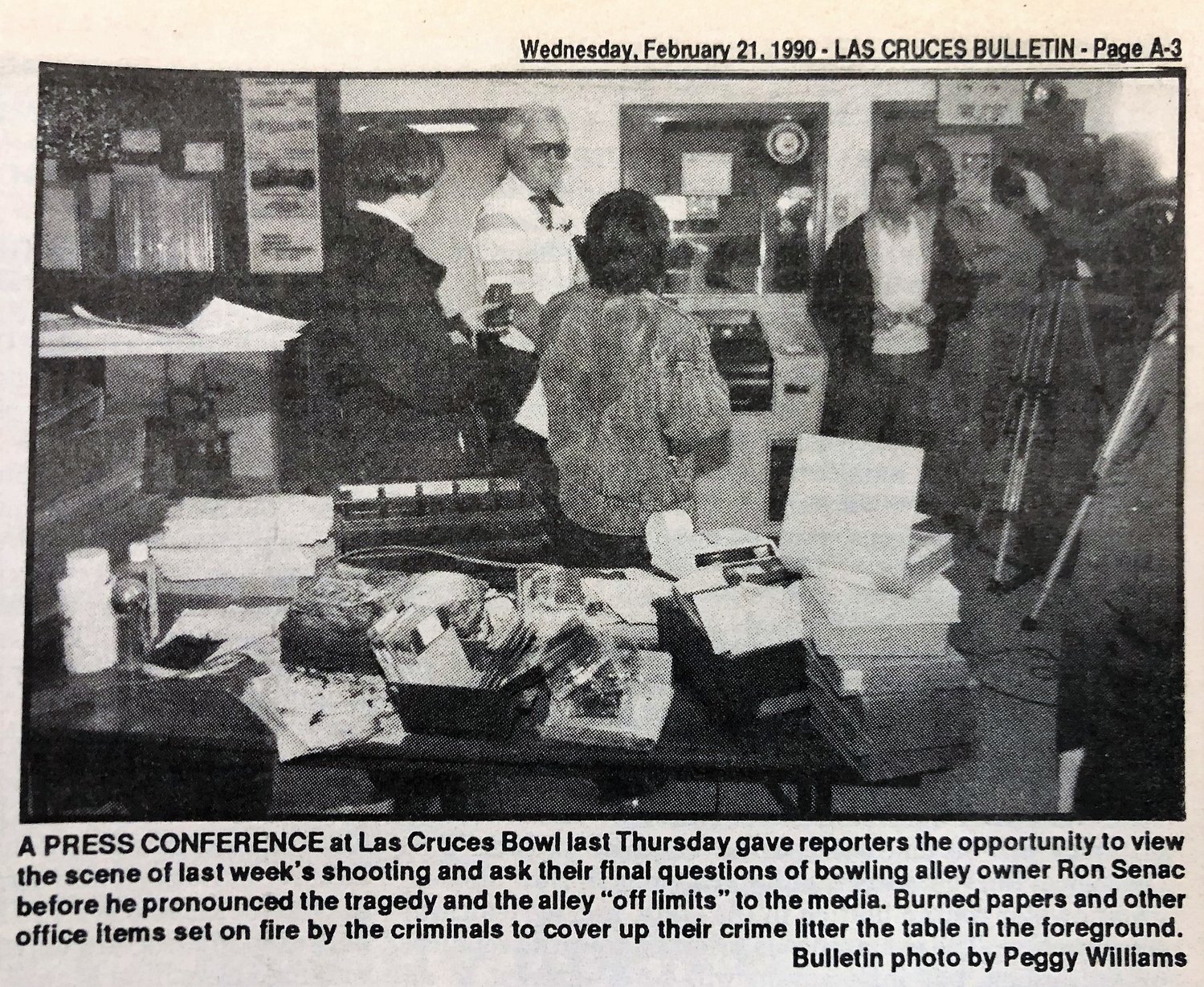 Las Cruces Bulletin Reporter Peggy Williams was on the scene during a press conference in 1990 following the bowling alley murders.
Previous Next
Posted Tuesday, January 21, 2020 9:06 am
By Elva K. Osterreich

“On Saturday, Feb. 10, 1990, two killers stormed the bowling alley in Las Cruces, shot [seven people] in the back of the head and started a fire on a desk,” said documentary film maker Charlie Minn. “It is still the largest unsolved mass shooting in the nation today.”

Minn’s 2011 film, “A Nightmare in Las Cruces” is being re-released with additional interviews at the end and can be seen on the 30th anniversary of the incident, Feb. 10, at Allen Theaters Cineport 10. Tickets are available beginning Jan. 27 for the one-time-only showing. Unless it sells out, in which case the theater has committed to a second showing on Feb. 12, Minn said.

On the morning of that Feb. 10, 34-year-old Stephanie C. Senac, the bowling alley manager, was in her office preparing to open with her 12-year-old daughter, Melissa Repass, and Melissa's 13-year-old friend, Amy Houser. The alley's cook, Ida Holguin, was in the kitchen when two men entered through an unlocked door. One pulled a .22-caliber pistol on Holguin and ordered her into Senac's office, where she, Repass and Houser were already being held by another gunman.

Soon after, Steve Teran, the alley's 26-year-old mechanic, entered with his two daughters, two-year-old Valerie Teran and six-year-old Paula Holguin. He went into Senac's office and stumbled onto the crime scene. The gunmen then shot all seven victims multiple times in the head at point-blank range. They then set the office on fire by igniting some papers before leaving the building.

Houser, Teran, and his two daughters were killed. Repass, despite being shot five times, called 9-1-1 on the office phone, allowing emergency services to respond immediately and saving her life along with her mother's and Holguin's. Senac died in 1999 due to complications from her injuries.

Minn said some money was stolen from a safe, and police classified the incident as a robbery, but some people think the burglary was a diversional tactic.

The lead investigator, Minn said, thinks to this day that it was some kind of drug payback situation. He said that, according to Holguin, the killers were looking for something in the file cabinets.

“It’s pathetic that it hasn’t been solved,” he said. “It’s a cloud hanging over their [Las Cruces’s] head, and the fact that its unsolved makes it worse. I feel the community should do more. Some awareness has to be thrown at this thing.”

Minn said he wants his film to get people talking about it again. After the film was released the first time in 2011, leads came pouring in -- and he hopes that happens again.

For more information about the film, visit www.bowlingmassacre.com.