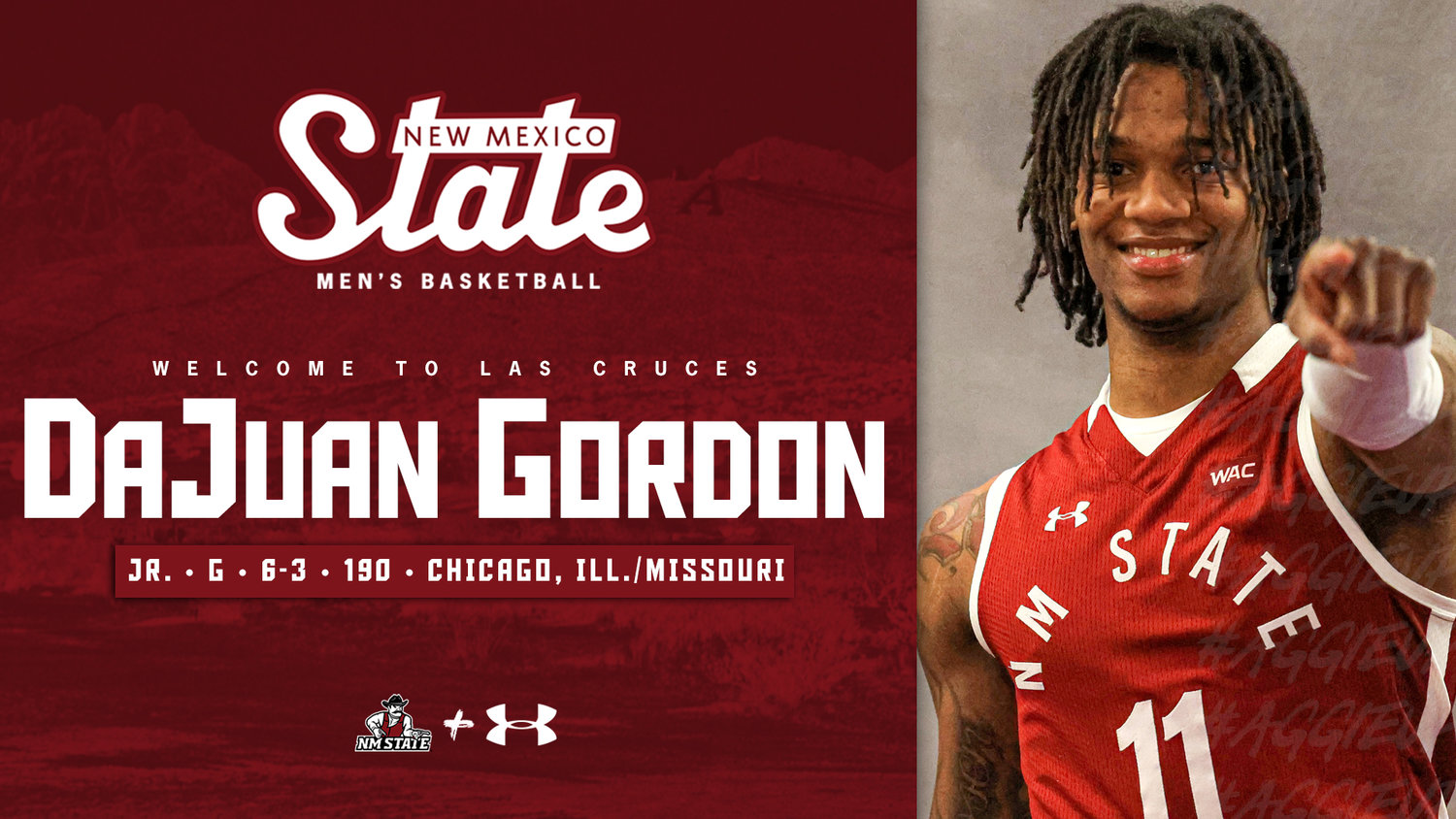 LAS CRUCES, N.M. - First, he was a Wildcat. Last season he was a Tiger.

Tuesday morning, in an announcement made by NM State head men's basketball coach Greg Heiar, DaJuan Gordon committed to NM State ahead of the 2022-23 season.

With three combined seasons of Big 12 and SEC experience under his belt, Gordon's commitment bolsters an NM State backcourt which lost the likes of Teddy Allen and Clayton Henry following the conclusion of the historic 2021-22 campaign.

DaJuan Gordon | G | Jr. | 6-3 | 190 | Chicago, Ill./Curie Metro HS/Kansas State/Missouri | Kansas State stats | Missouri stats
• A pair of Power Five institutions - most recently Missouri - benefitted from having one of the nation's top-100 prep players from 2019 on their roster through the course of the last three seasons.
• Through his lone season in a Mizzou uniform, Gordon started each of the 32 games he took part in. In all, the Chicago, Ill., product averaged 8.3 points, 4.0 rebounds and 1.2 assists in 24.5 minutes per game.
• Able to do a little bit of everything, Gordon turned in 12 outings with 10 or more points as a Tiger. His best single-game scoring output came in a second-round SEC Tournament showdown with LSU where he poured in 19 points on a 7-of-9 showing from the field.
• Before his sole season with an SEC team, Gordon called Manhattan, Kan., home in 2019-20 and 2020-21. Serving as one of the primary contributors for Bruce Weber's Kansas State squad, Gordon logged minutes in 25 games as a sophomore in 2020-21 while starting 22 of those contests.
• Not only did his four double-doubles top the K-State charts in 2020-21, he put up consistent averages of 9.4 points, 5.5 rebounds and 1.4 assists in 26.1 minutes per game.
• One of four guards in the Big 12 to rank among the league's top 15 players in rebounding, Gordon reeled in at least five rebounds in 15 games while posting 13 double-digit scoring performances.
• As a freshman, Gordon collected 2020 Academic All-Big 12 Rookie Team and Spring 2020 Big 12 Commissioner's Honor Roll accolades. The 2019-20 season saw him serve as the only freshman on the Wildcats' roster to play in all 32 games while averaging 6.3 points, 3.4 rebounds and 1.3 steals.
• Chicago prep basketball was headlined in part by Gordon through his high school days. The 2019 Chicago Sun-Times Player of the Year, Gordon attained a national ranking of 71st overall in the 2019 class while suiting up for Curie Metropolitan High School.
• With Gordon on their side, the Condors went 61-7, appeared in consecutive Class 4A State Tournaments. Gordon's senior year was his best as he latched on to accolades such as Illinois Basketball Coaches Association First Team All-State, USA Today First Team All-State, Chicago Sun-Times First Team All-State, Champaign News-Gazette First Team All-State and City/Suburban Hoops Report All-State.
• Before his prep days were in the history books, led the Condors to a 35-2 mark in 2018-19 which featured both city and conference titles. Gordon averaged 17.6 points, 7.9 rebounds, 2.0 assists and 2.0 steals per game that season.

What they're saying about Gordon
NM State head coach Greg Heiar | "We are very excited to announce the signing of DaJuan "Quaye" Gordon. He has a high-energy personality, brings a wealth of maturity to the table and has a great IQ and feel for the game. DaJuan has started 65 games in his career while competing against high level competition. His athleticism along with his ability to score the ball will prove to be invaluable to our program. I personally love that he takes as much pride on the defensive end of the floor as he does when his team has the ball. We got a tremendous two-way player who will be one of the captains and leaders of the team from day one. Quaye is a complete student-athlete, hard worker and competitor that loves the game of basketball. Aggie Nation is really going to appreciate the heart, hustle, character and pride he brings to our university and community. Today is a great day to be a Aggie!"

For complete coverage of NM State men's basketball as the Aggies continue to gear up for year one under Heiar and company in 2022-23, visit NMStateSports.com - the official home of Aggie athletics - and follow the Aggies on Facebook (NM State Men's Basketball), Twitter (@NMStateMBB) and Instagram (@NMStateMBB).