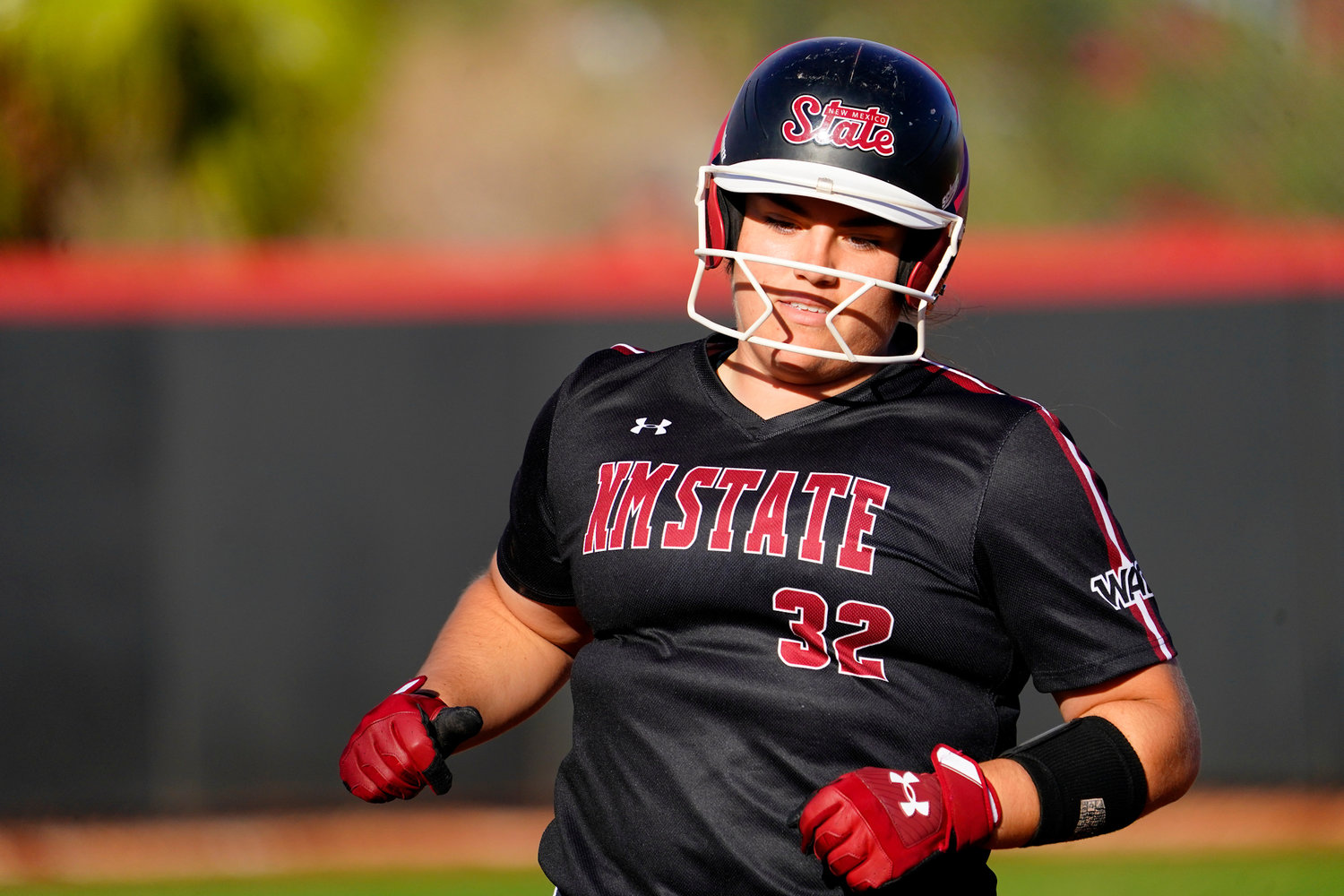 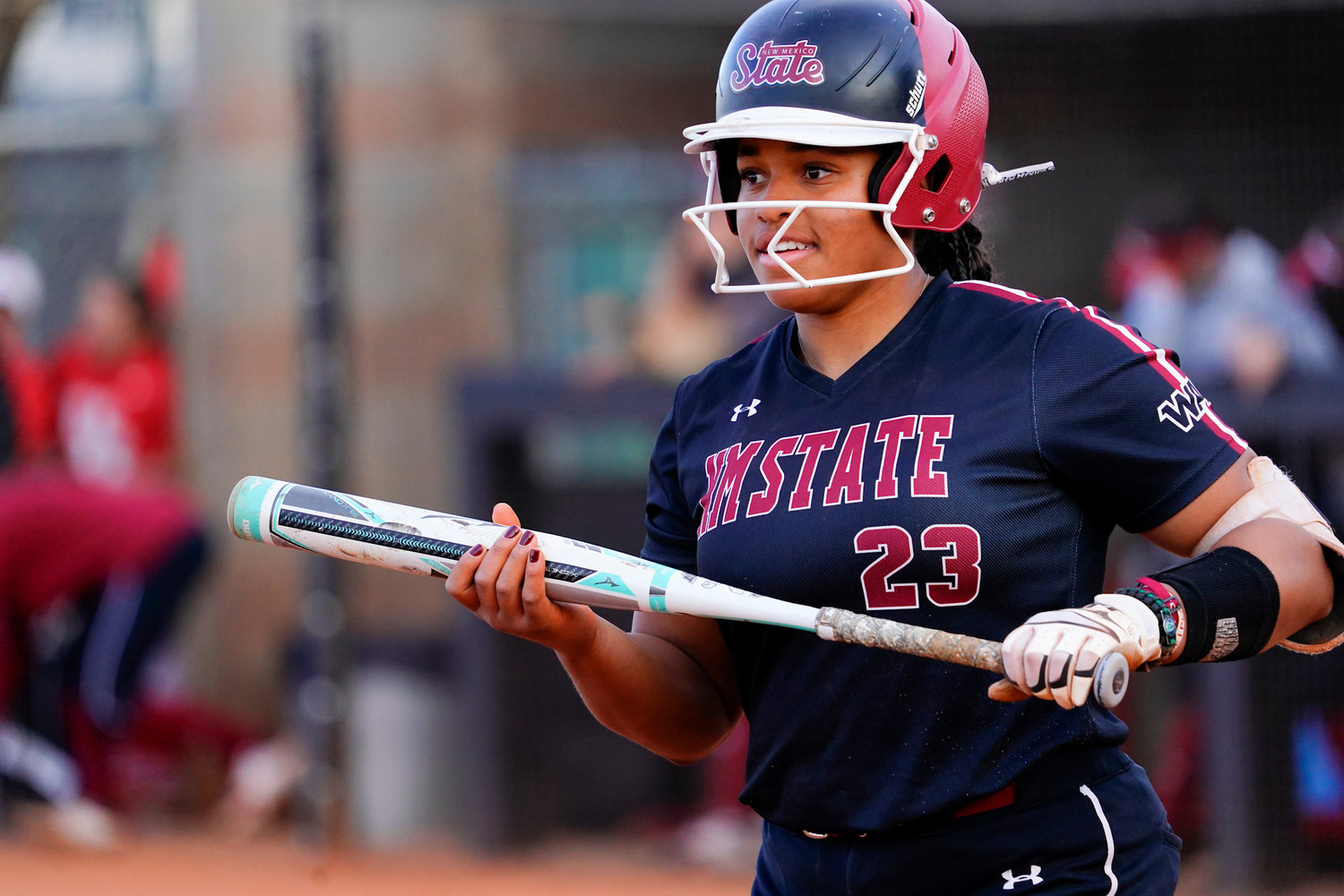 The New Mexico State University women’s softball team has gotten off to a bit of a rocky start but the Aggies are confident they will turn their season around now that they are in conference play.

The Aggies, who were regular-season Western Athletic Conference champs last year, are 1-5 in conference and 6-21 overall. The Aggies most recently were swept in a three-game series against Cal Baptist in Riverside, Calif.

During the nonconference portion of their schedule, the Aggies played six games against Power Five opponents, two teams ranked in the nation’s top 25 and three squads that made the NCAA softball tournament a year ago.

Veteran head coach Kathy Rodolph, who is now in her 19th year, said it may have been a case of “overscheduling” considering they have three talented but inexperienced pitchers on their roster this season.

“I couldn’t be more proud of them. They fight; they are getting better,” Rodolph said. “Because of the schedule we have played, they aren’t intimidated by anyone, anymore. We are starting to calm those nerves and bring out more of our talent.”

Historically, the Aggies have been known for their hitting. Associate head coach Cat Heifner leads that part of the game, while Rodolph jokes she is in charge of pitching and is “the head coach on paper if someone gets in trouble.”

“I will tell you: If we have an out, we will never quit,” Rodolph said. “If you come out to the ball field, you will see a lot of great energy coming out of our dugout. The girls love to play. They love to represent Las Cruces and New Mexico State.”

Rodolph said that each of her players does 40 hours of community service each year as a way of giving back. She also said that she has a 100 percent graduation rate for athletes who have stayed with her for four years.

“Not only will you see phenomenal young ladies who can play softball, but they are actually phenomenal women,” Rodolph said. “That is actually the biggest thing I would like the community to know.”

Rodolph said if you haven’t been out to see the softball team, you may be in for a pleasant surprise.

“Our games are a lot faster paced than baseball,” she said. “Our games, typically we are done in two hours.”

Redshirt sophomore Ramsay Lopez, a third baseman from Albuquerque, said they have played some challenging teams but are ready to start clicking now that they are into the conference portion of their schedule.

“We have been having really good practices and good conversations with each other, so I think conference will be the time we turn our season around,” Lopez said.

“In our conference, we won’t be facing the quality of hitters that Washington or ASU (Arizona State) has,” she continued. “I think as long as we keep our hitting up, we will be hard to beat.”

“We have some unfinished business with them,” Lopez said.

Senior Kayla Bowen, a first baseman and occasional pitcher, said they are starting to come together.

“We have had a little rocky road,” Bowen said. “But I think with that rocky road, there are lessons we are learning.”

Bowen said they play a tough nonconference schedule on purpose, so they are ready for anyone.

The Aggies will host Utah Valley at 6 p.m. Friday, April 1, at the NM State Softball Complex and again at 4 p.m. Saturday, April 2 for a double-header.

New Mexico State will also travel to El Paso for a nonconference game with I-10 rival UTEP at 6 p.m. Tuesday, April 5.

The much-anticipated showdown with Seattle U will be at the Aggies softball complex April 8-9 for a three-game set with a 6 p.m. game that Friday and a 4 p.m. double-header on Saturday.