NM State women, men on the road for weekend 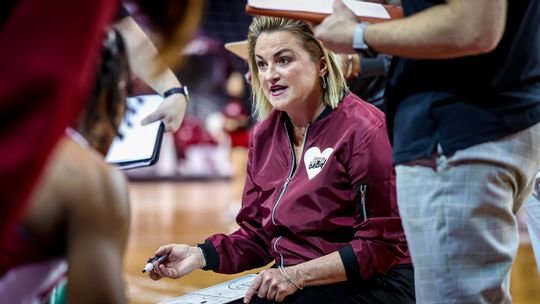 NM State women’s coach Jody Adams-Birch had her team 9-9 as of Jan. 18, and 4-2 in Western Athletic Conference play, putting them in a tie for fourth place. Their next home game will be Thursday, Jan. 26.
NMSU photo
Posted Thursday, January 19, 2023 8:49 am
Bulletin report

NM State’s men’s and women’s basketball teams will both be on the road for the weekend.

The Aggie women (9-9 at presstime, and 4-2 in Western Athletic Conference play) will be in Seattle for a Saturday, Jan. 21, game.

Both teams played Jan. 19 in road games that ended after the Bulletin’s presstime. The men played Southern Utah, and the women were at Grand Canyon.

The next home game for the women will be 6 p.m. Thursday, Jan. 26, against Abilene Christian. The men won’t be home until a game 7 p.m. Wednesday, Feb. 1, against Stephen F. Austin.