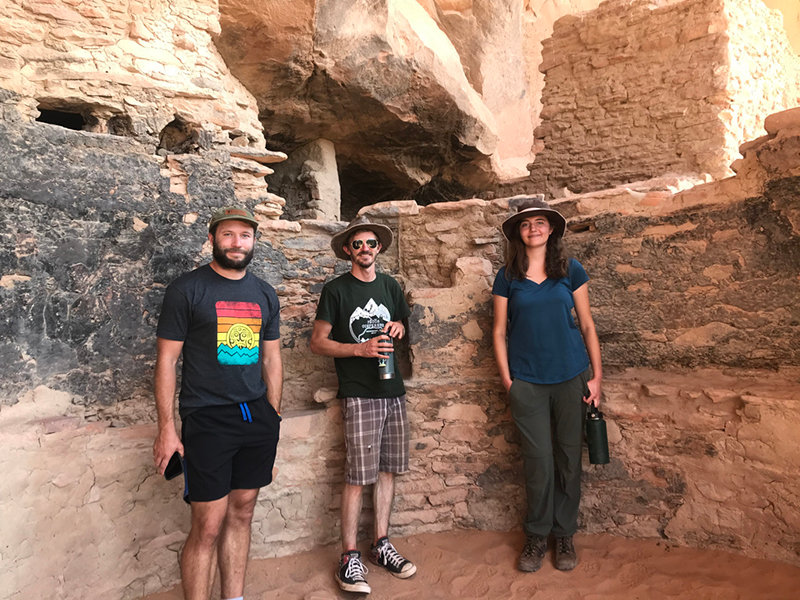 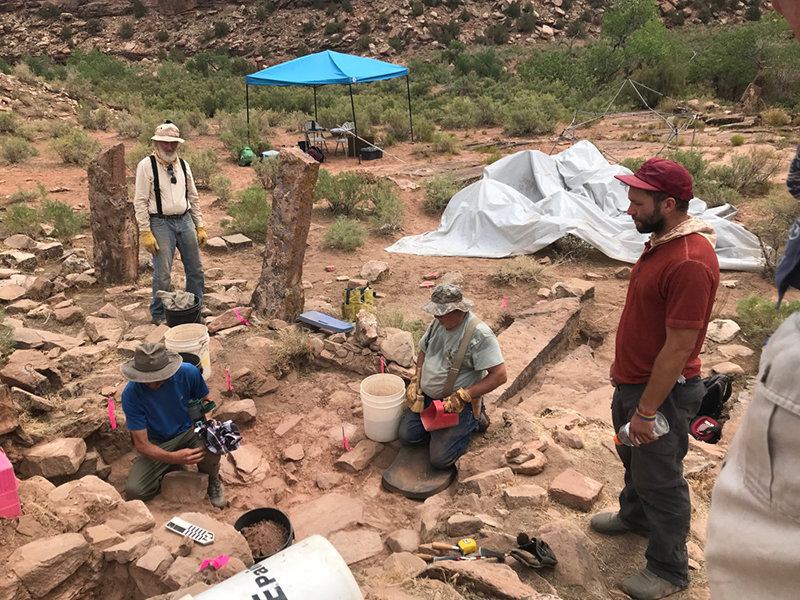 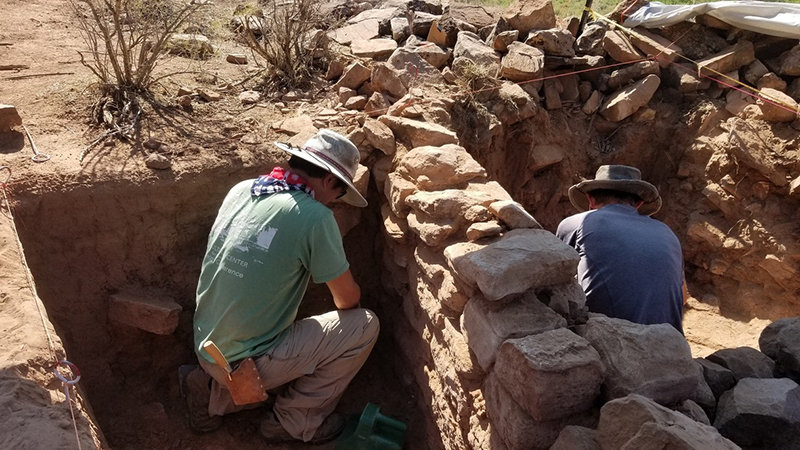 Anthropology Professor Fumi Arakawa is seen here excavating the exterior wall of the western great house as Daniel Hampson excavated inside the room. Both Arakawa and Hampson tried to reach the bottom of the interior (room) and exterior wall.
Courtesy photo
Previous Next
Posted Tuesday, November 2, 2021 5:33 pm
NMSU News Release by Billy Huntsman

New Mexico State University anthropology students had the chance to participate in the first professional excavation and exploration of an archeological site in southeastern Utah inhabited by ancestors of the Pueblo people. Fumi Arakawa, professor in the Department of Anthropology, was one of the co-principal investigators on the excavation project conducted by researchers from Brigham Young University and Weber State University. NMSU graduate students Braeden Dimitroff and Daniel Hampson traveled with Arakawa to Coal Bed Village in Utah over the summer. Despite being one of the largest villages in southeastern Utah, Arakawa said Coal Bed Village had not been professionally excavated, which provided a great opportunity for students to get hands-on learning experience. “These students learned so much about the complexity of multi-occupations and multi-constructions of the site and the ritual and domestic use of three great houses at the site,” Arakawa said.  “It’s a good site for archeologists but a really good site for archeology students because it really makes you think about the big-picture question in archeology: Why did people aggregate to this particular site? How many people might have occupied the village? Why did these people decide to leave the village? Where did they go?” The group excavated an external wall of one of the great houses. Great houses are multi-storied structures built by ancestral Pueblo people. “The big takeaway for me was just how important this site actually is,” said Daniel Hampson, who started graduate school at NMSU this fall. “I had known it was big and that it was interesting but until you’re actually there and you actually walk up to the site as they would have walked up to it with these giant megaliths. The whole setting is on this big point with views in every direction. It’s hard to describe how important it would have been until you’re actually working there.” “You not only get to work with intelligent researchers, some of the top people in this field, but you also get work experience,” said Braeden Dimitroff, an NMSU graduate student who had just defended his thesis before joining the team working at Coal Bed Village. “To get into positions in archaeology you need work experience. A lot of universities don’t have the opportunities to work on these kinds of projects but Fumi is always working on a project and this one is supported by the State of Utah fund. It’s a really important project.” Arakawa and his team found different styles of construction on the external wall. “The wall extended approximately two meters or six feet from the top to the bottom, and the thickness of the wall was about 50 centimeters,” Arakawa said. “This indicates the great house was constructed in different phases, what are called episodes.” Arakawa said the fact this great house was built in different episodes had not been previously identified. “Our excavation also determined that the great house was a two-story building, and inside we found multiple episodes of natural and cultural deposits,” he said. “At the end, we found two different styles of external walls and one interior wall.” The goal of the project, funded by State of Utah, was not only to understand and reconstruct how ancestral Pueblo people at Coal Bed Village lived from the 800s through the late 1200s AD, but more importantly, to salvage crucial cultural resources from severe erosion and arroyo cuts at the site. “Our findings will help researchers determine when and how the Coal Bed community members aggregated to the village, how they organized and constructed their houses and communal structures, what kind of sociopolitical organizations, such as territoriality/land-tenure system, exchange, they practiced through time, and what potential ritual or ceremonial features, such as megaliths and an ancient shrine, tell us about their belief system,” Arakawa said. If the grant support continues, Arakawa and one of the graduate students along with researchers and students from BYU and WSU, are planning one more field season at Coal Bed Village in 2022. “We hope to continue to excavate one of the great houses and compare the findings with the excavational results of another great house,” he said. After earning his master’s degree, Dimitroff moved to New York and is applying to work in museums. “I want to continue in museum education, he said. “Fumi helped foster that. He gave me lots of opportunities to work in museums as well as excavations.” Hampson plans to follow in his parents’ footsteps after earning his master’s degree. They are both archaeologists. “I am very much a southwestern research archaeologist,” he said. “I don’t know if that means research and a contract job or if it means doing it through a university but I want to do research in the southwest specifically.” Delton Estes, Lonnie Ludeman, and Brent Reed joined the NMSU crew as volunteers on the research team. “Their efforts and contributions were crucial for us to complete this project in 2021,” Arakawa said.