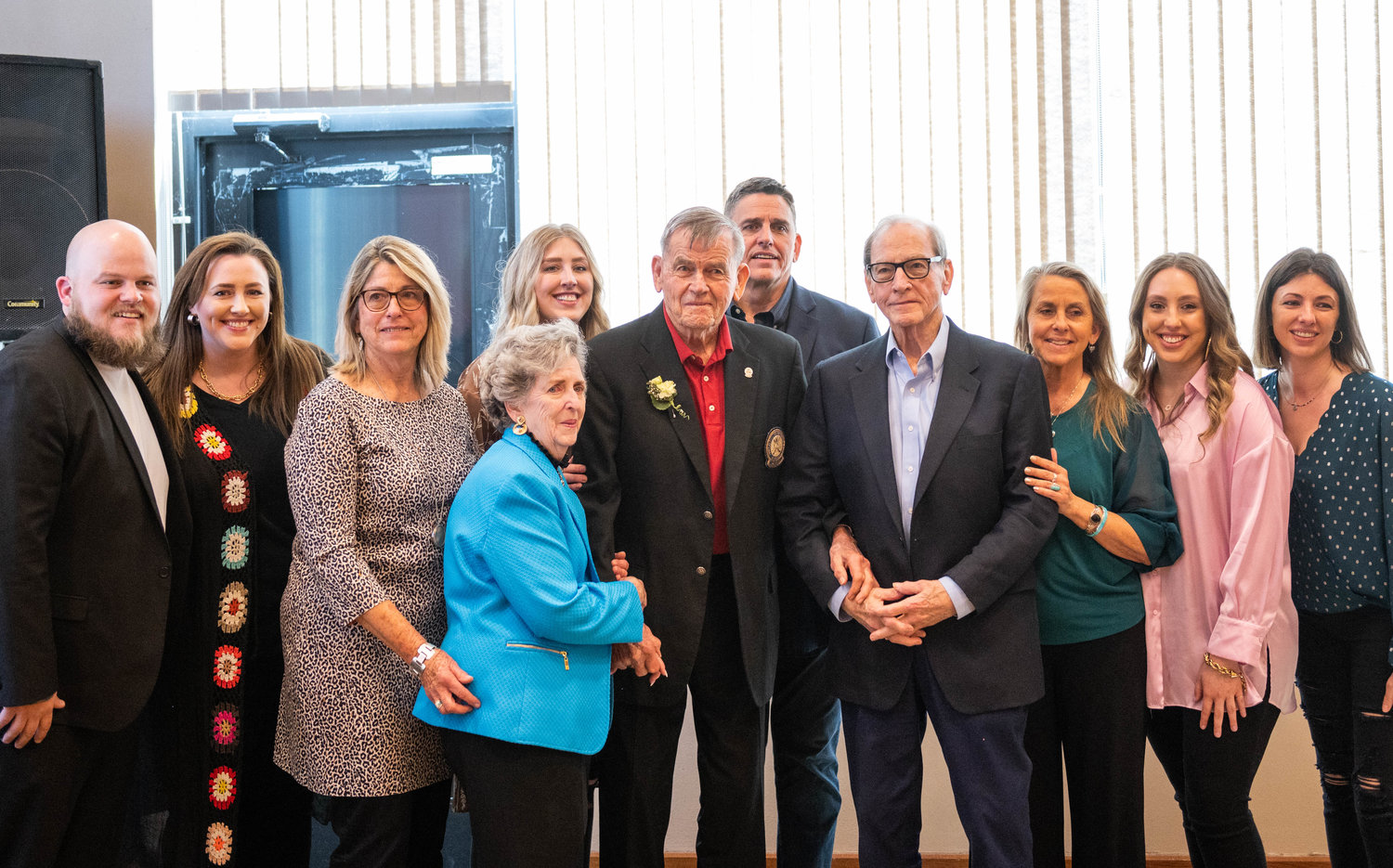 Herb Wimberly, former New Mexico State University Golf Coach,center, was honored at the College of Business Hall of Fame lucheon and was told the college has renamed the Golf Management Program after him. It will be known as the Herb Wimberly Golf Management Program. April 1, 2022. (NMSU photo by Josh Bachman)
NMSU photo by Josh Bachman
Posted Wednesday, April 20, 2022 8:37 am
By Carlos Andres López, Senior Communications Specialist NMSU News Center

More than 50 years after Bobby Lutz came to New Mexico State University to play golf for Herb Wimberly, the two former Aggies were inducted into the College of Business Hall of Fame.

Lutz and Wimberly were honored, along with First American Bank, April 1 at the New Mexico Farm and Ranch Heritage Museum.

“Through the Hall of Fame, the College of Business seeks to create visibility for its alumni and develop a strong relationship with the business community,” said Eileen Hogan, the college’s interim dean. “We congratulate all of our newest inductees and thank them for the continued support.”

Lutz, a Dallas businessman who graduated from NMSU in 1973 and 1975 with bachelor’s and master’s degrees, received this year’s Hall of Fame Award, which recognizes outstanding business alumni who have distinguished themselves in their careers.

“No one ever earns an award like this – they simply get lucky,” Lutz said. “What a gift, what an honor – I am truly flattered, and I know how lucky I am.”

Lutz’s ties to NMSU date back to 1969. That year, he joined the NMSU golf team after Wimberly, the head coach at the time, convinced Lutz to play for NMSU.

Lutz spent four years on the team and was active in Sigma Alpha Epsilon, Beta Alpha Psi and other student organizations during his time at NMSU. At one time, he also served as a student senator representing the College of Business.

Lutz credits much of his business success to Wimberly and the education he received at NMSU.

“Not just this award, but almost everything good that has happened to me since leaving school is a result of Herb Wimberly,” Lutz said. “Everything but my wife, I did with the help of a couple others. My character, integrity, work ethic and, to some degree, my faith can be traced back to our relationship. I would charge hell with a bucket of water for Coach Wimberly.”

Wimberly later accepted the college’s first-ever Lifetime Achievement Award during the luncheon. The new honor recognizes individuals who have given outstanding contributions or service over their whole career. Hogan also announced that the college’s golf management program would be renamed in Wimberly’s honor.

Wimberly’s career at NMSU spanned more than three decades. He served as the head coach of the NMSU golf team 1962-93 and established what is now known as the Herb Wimberly Golf Management Program in 1987. At the time, it was the third program of its kind in the nation to earn an endorsement from the Professional Golfers’ Association of America. It is currently one of 18 programs in the United States fully accredited and endorsed by the PGA.

Wimberly was also named “coach of the year” six times by the Missouri Valley Conference and once by the Big West Conference.

“Plain and simple, Herb Wimberly is a legend. Herb and his brother, Guy, were instrumental in bringing the golf management program to NMSU,” said Pat Gavin, the program’s current director. “He devoted his entire career at NMSU to coaching and mentoring our PGM students. Up until the pandemic hit, Herb would work with PGM students one-on-one at the driving range. Herb is a perfect recipient of the Lifetime Achievement Award.”

The final award went to First American Bank, which received Corporate Traders Award. The honor recognizes outstanding contributions by corporations to the College of Business’s mission.