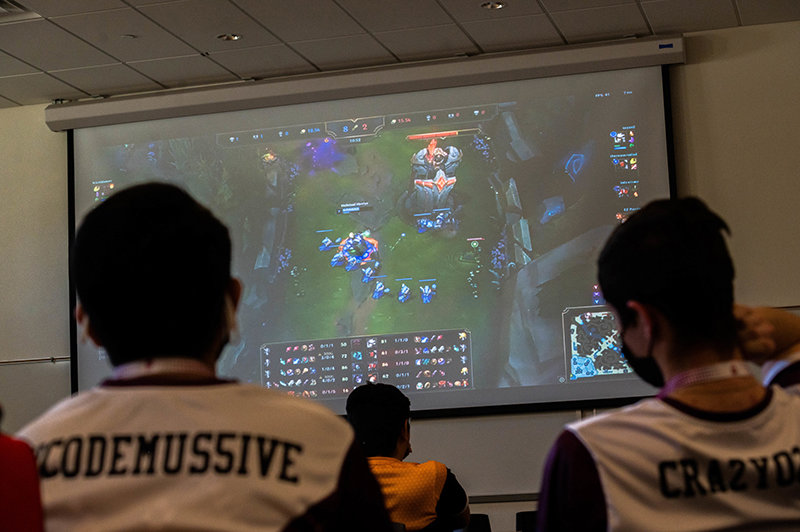 NM State Esports is an organization that allows for competitive gaming on campus and offers a space for those who would like to meet new people and have fun.

The team has grown since established in 2015, in players and the space they occupy. In fall 2018, NMSU Vice President for Student Success Renay Scott connected the student organization with NMSU’s Information and Communication Technologies and Facilities and Services (ICT).

“I saw my role as cheerleader and helping them navigate the natural barriers and unknowns when trying to advance their ideas,” Scott said.

After permission was granted to utilize the ICT training lab, the lab computers had to be modified to add games, change security and more. The club utilized the ICT training room after hours until it received its own gaming lab in Corbett Center Student Union in spring 2022.

“Since the lab’s completion, I have supported them through my own social media interactions with the team and also meeting with them when they had ideas for ways to promote esports,” Scott said.

One advancement of the team this year is the expansion of the organization through active communication with the community.

“The club members do a tremendous job recruiting,” said ICT Planning Officer/Director of Student Technology and Planning Randey Bamford, who is the adviser to the esports team. “Whether it’s an NMSU-sponsored esports event or a competitive event hosted by a different organization, their recruiting efforts are outstanding. They are very visible, friendly and approachable. They are tremendous ambassadors for NMSU and great at engaging potential recruits. NMSU Esports is the best collegiate esports organization in the state, by far, and the club members are responsible for that success.”

Freshman Ethan Sarles was the first student in New Mexico to commit and sign onto a college esports team in April 2022.

“I think it’s really exciting,” Sarles said. “I wasn’t expecting to be the first to do anything, but I think it’s a really cool experience and the whole signing event was just a really awesome experience.”

In addition to Sarles, 30 new players were signed and are committed to competing on the NM Esports team in 2022-23.

“It shows that you can commit to a program, New Mexico State is just one of many, but you can commit to an educational esports program in New Mexico and follow your dreams in competitive gaming, all the while, obtaining a degree in whatever profession you wish to pursue after college,” said NMSU Esports Director Ryan May.

The majority of newly signed players are NMSU freshmen, although a handful are transfers from the University of New Mexico, San Juan College, New Mexico Institute of Mining and Technology, University of Texas El Paso, Southeast New Mexico College and Colorado College.

The organization now has more than 1,700 total members and offers scholarships to players on the team.