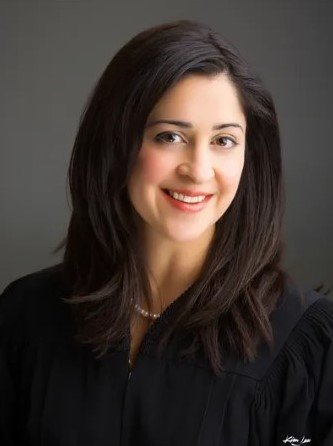 If Zamora wins the Nov. 8 general election, it will be her only partisan election as a state Supreme Court justice, as she would face retention elections every eight years after that for as long as she remains on the court.

Zamora was appointed to a Metropolitan Court judgeship in Albuquerque in 2008 and was elected as an Albuquerque district judge in 2012. She was elected to the New Mexico Court of Appeals in 2018 and held that position until her appointment to the state Supreme Court.

Zamora, 48, was born in Torreon (in Torrance County), New Mexico and grew up in Albuquerque, where she lives today with her two children – she is “the only mom” on the state Supreme Court, Zamora said. She attended New Mexico State University in Las Cruces, earning undergraduate degrees in psychology and government.

“I loved it,” Zamora said of her time in Las Cruces.

Zamora had planned to become a child psychologist, she said, but became interested in the law after taking government classes at NMSU.

Zamora earned a law degree from the University of New Mexico in 2000 and was admitted to the New Mexico Bar that same year. She served as an assistant attorney general in the Consumer Protection Division of the New Mexico Attorney General’s office and as guardian ad litem for abused and neglected children.

“I know how the courtroom operates,” said Zamora, who said she has presided in more than 20,000 criminal and civil cases, including water law and cases involving children and families, during her career as a judge and justice. She also has presided over specialty cases, including homeless, drug and tribal courts.

Zamora was part of a unanimous state Supreme Court ruling on a cattle-rustling case heard earlier this year in Las Cruces. She said it was the first time the court has heard a case outside of Santa Fe. Attendees included New Mexico State University and local high school students.

After her appointment to the state Supreme Court, Zamora said she led the justices in establishing a Commission on Mental Health as part of her passion “about making sure that in in our criminal justice system, there was more availability of mental health resources,” Zamora said on an October Portia Project.

“People want their judges to follow the law,” Zamora said. They “want a fair shake,” she said, and are entitled to timely rulings.

Delays in cases are “heartbreaking,” she said. “Justice delayed is justice denied.”

Making sure the courts in New Mexico are open to everyone is also vital, she said. Broadband access is essential to maintaining virtual court hearings that may be necessary for cases in some rural areas and tribal communities in the state.

“Look at my record,” Zamora said. “My judicial philosophy is, whoever you are, you are going to be treated fairly in my courtroom and by me.”