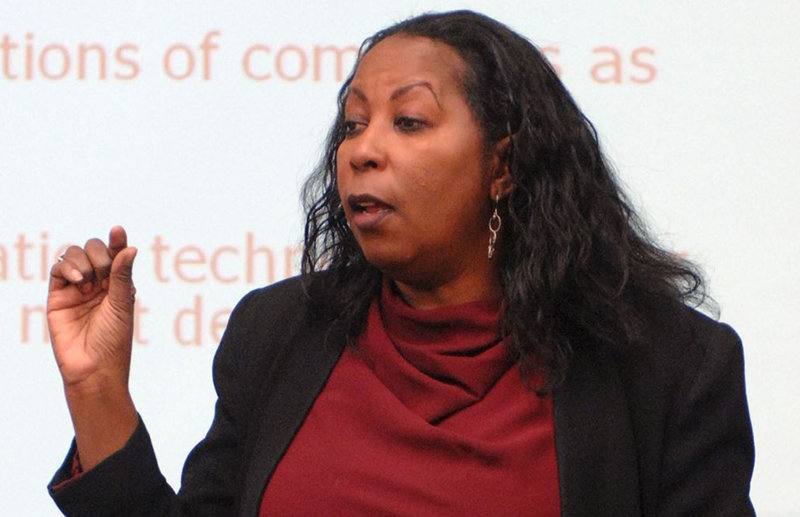 “I am absolutely delighted that Dr. Green has agreed to take on this interim role,” Scholz said in the announcement. “She is a compassionate, forward-thinking and steady leader who understands the needs and challenges faced by our Black students. She’s also incredibly gifted at building relationships, and will help ensure our students find a greater sense of community and belonging here at NMSU. We are very fortunate to have her on board.”

Green, has been a professor of information systems, a social activist, an expert lecturer, a writer, a choir director and a public speaker. She has created hundreds of videos and has taught thousands of students as a college professor in a career that spans more than 20 years. At NMSU, she served as a college associate professor in the College of Business for more than 13 years – a portion of that time as director of the college’s Master of Business Administration program.

“Because of those who came before me and demanded equity, I’ve had the opportunity to teach at a university that once denied the first African American student the right to sit in the classroom while she attended classes here,” Green said. “It was the compassion of well-meaning faculty who demanded that Clara Belle Williams be allowed to sit in a segregated classroom, undoubtedly risking their own livelihoods in the process. My mother was a cook at NMSU. But I didn’t have to work in the kitchen at NMSU. Instead, I was allowed to work in the classroom. Therefore, I have an obligation to pay it forward.”

Green has conducted the NMSU Gospel Choir for the past 16 years and has performed for heads of state at numerous concerts and public events throughout New Mexico.

She was appointed as a commissioner with the New Mexico Martin Luther King State Commission by former New Mexico State Sen. Mary Kay Papen in 2017. She currently serves as chair of that commission. She was appointed to the Law Enforcement Academy Board by Gov. Michelle Lujan-Grisham in 2019, where she serves as vice chair. She has been the president of the Doña Ana County NAACP for the past five years, and she is the second vice president for the NM State Conference NAACP.

She said she’s looking forward to helping students connect with the resources they need and feel like they are being heard and supported at NMSU.

“Our students face many issues that require our attention. I can relate to these students. I have been in their shoes, and I’ve heard their concerns,” Green said. “Through my own lived experiences, I hope to be the voice of reason. I want to be an advocate. I believe that the administration at this university is interested in student success. I share that interest. I want our students to know that they have the support they need. For me, it’s a labor of love for the students that I accepted this position.”