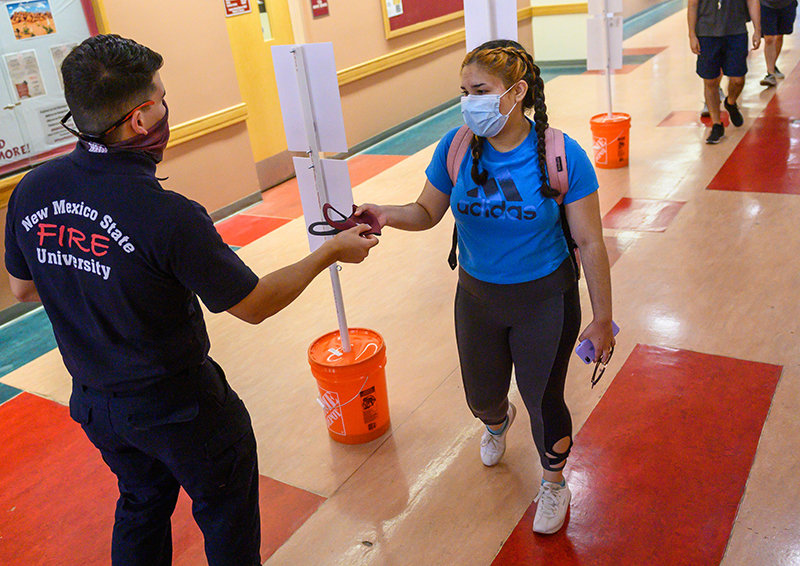 A firefighter with the New Mexico State University Fire Department distributes face masks to people on the NMSU campus in August. Women, racial minorities and older adults were more likely to wear face masks as a protective measure to slow the spread of COVID-19, according to a new study co-authored by an NMSU researcher.
NMSU photo by Josh Bachman
Posted Tuesday, December 8, 2020 11:12 am
NMSU Press Release by Carlos Andres Lopez

During the early stages of the pandemic, women, racial minorities and older adults were more likely to wear face masks as a protective measure to slow the spread of COVID-19, according to a new study co-authored by a New Mexico State University researcher.

A survey of 838 adults in the United States found that females, racial minorities such as African-Americans, and low-income employees who may have been forced to work outside their homes were most likely to wear face masks in response to COVID-19, said Jagdish Khubchandani, professor of public health sciences at NMSU.

The study, recently published by the Multidisciplinary Digital Publishing Institute, is the largest and earliest examination of mask-wearing habits. Khubchandani conducted the research in collaboration with colleagues from Ball State University in Indiana.

The researchers found reports of higher COVID-19-related morbidity and mortality, the general lack of ability to pay for health care and fear of catastrophic consequences may have prompted a greater prevalence of mask wearing among certain disadvantaged groups.

“During the early stages of the pandemic, most people were doing all they could to stay safe, but young people and males continued to disregard protective measures such as masks and gloves,” he said, noting that mask wearing became politicized. “However, some groups masked up because they were afraid of spreading the disease to others simply because they had to leave the home to work, or they may have feared the infection to a greater extent. Younger people should increase mask-wearing frequency as the average age of hospitalization and deaths has fallen in many parts of the world. The virus is not sparing anyone.”

The purpose of the study, Khubchandani said, was to conduct a rapid national assessment of public behaviors to prevent COVID-19 spread during the early stages of the pandemic, and to assess how these behaviors may have differed based on selected sociodemographic characteristics.

Khubchandani noted the U.S. declared a national emergency in March over the COVID-19 outbreak and, within a month, government authorities issued recommendations on the use of masks and gloves as protective measures. Despite such guidance, he said, media reports highlighted a lack of compliance.

Seventy-six percent of the study participants reported wearing masks and 30 percent reported wearing gloves more often during the pandemic. While gloves are no longer recommended for the general population, a third of the people across the nation may have tried them for protection in the pandemic, Khubchandani said.

Similarly, the following groups were significantly more likely to wear gloves during the pandemic compared to their counterparts: females (59 percent); divorced/widowed persons (54 percent); unemployed persons (38 percent); and those older than 36 (35 percent).

The study also found that while there was no statistically significant difference based on region, individuals from the northeastern U.S. had the highest prevalence of wearing masks (81 percent) or gloves (36 percent) more often during the pandemic.

“This was the worst affected part of the country during the initial stages of the pandemic, which may have prompted such high compliance with preventive behaviors,” Khubchandani said, adding, “We must expect to wear masks for at least another year, even with a vaccine in sight.”

Khubchandani said additional studies are needed on mask wearing in light of quarantine fatigue, the rising number of cases of COVID-19, attitudinal and behavioral factors, myths and rumors about masks, the lack of face mask mandates across many regions in the U.S., and different types of face coverings used by the general population that may not be effective.