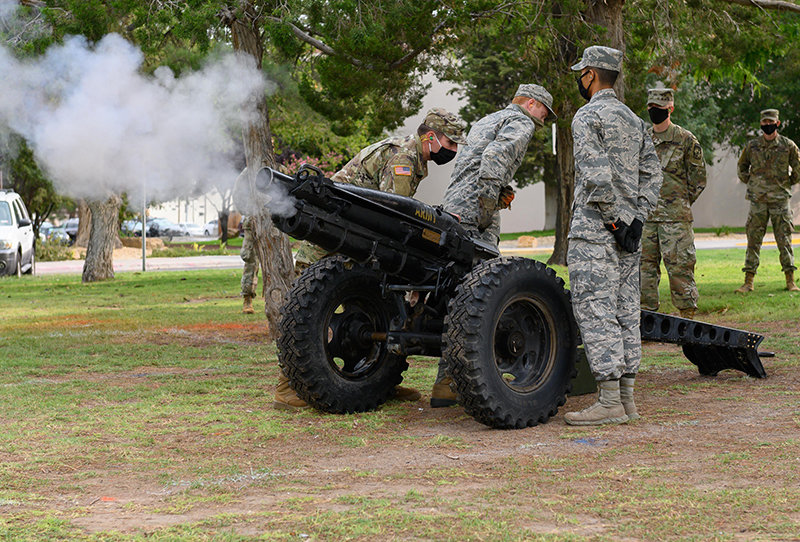 New Mexico State University’s Air Force and Army ROTC will commemorate the tragic events of 9/11 beginning at 8 a.m. Friday, Sept. 9 on the Horseshoe on the NMSU campus. The event is open to the public. Twenty-one years ago, the most lethal attacks in U.S. history happened when terrorists highjacked four commercial airliners and crashed into both World Trade Center towers and the Pentagon. The fourth plane crashed in a field in Pennsylvania. "Who we hold as heroes speaks volumes about our culture—both on the macro level as a nation and on the micro level as the Bataan Battalion," said Lt. Col Adam Buchanan, NMSU's Army ROTC commander.  "The victims of the terrorist attacks from Sept. 11, 2001 and the first responders who sacrificed their lives to save others are worthy of commemorating as heroes.  NMSU ROTC cadets will begin the first firing of the cannon at 8:46 a.m., the time American Airlines Flight 11 crashed into the north tower of the World Trade Center. At 8:50, cadets will have a brief memorial service and the honor guard will post colors. "A generation of young people, some of whom are now here on the NMSU campus, were not alive to experience the shocking events of Sept. 11 that shook our nation to the core and shaped the trajectory of the next 20 years of foreign policy," Buchanan said. "Passing on the knowledge, shared experiences and benefits we learned as a nation from 9/11 to this younger generation is an important part of our cultural fabric.  Commemorative events like this help pass on this shared knowledge." ROTC cadets will fire the cannon five more times at 9:03 a.m. for United Airlines Flight 175, 9:37 a.m. for at American Airlines Flight 77, 10:03 a.m. for United Airlines Flight 93 and twice more at the time each of the twin towers fell. The last firing will be at 10:28 a.m. To learn more about the event, contact Patti Alarcón at 575-646-4030 or email palarcon@nmsu.edu