Aggies win opener, then lose to Seattle U in double-elimination tourney 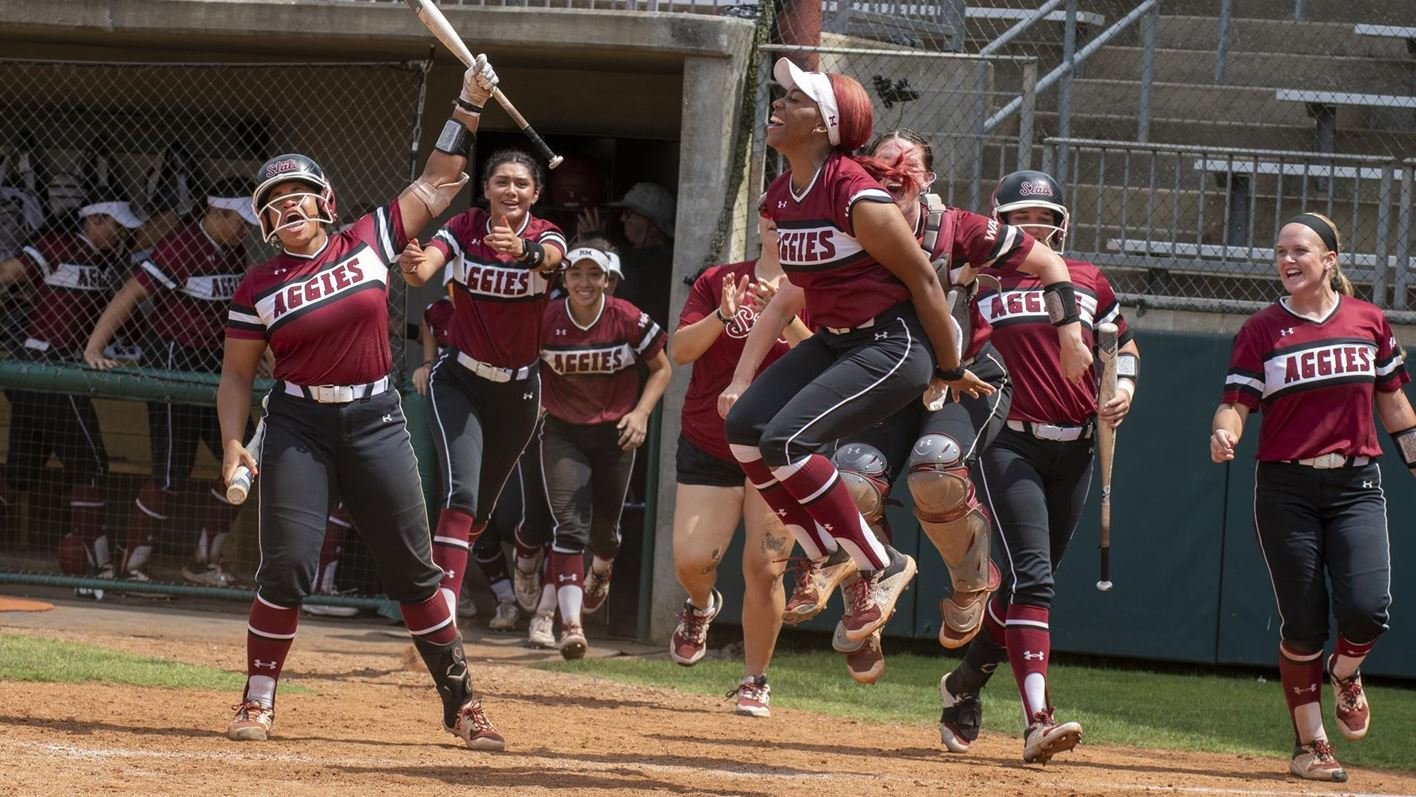 The New Mexico State University softball team celebrates its win in the first round of the WAC tournament May 11.
NMSU Athletics
Posted Thursday, May 12, 2022 6:26 am
From NMSU Athletics

HUNTSVILLE, Texas – The Aggies entered the day with one goal in mind: survive and advance. They did just that as they began the day with a tight 5-4 victory over sixth-seeded Sam Houston to earn their right to compete in the double elimination part of the WAC Tournament bracket.

NM State's second bout of the day did not end in their favor as they fell 8-0 (6) to No. 3 Seattle U in the nightcap of day one of the conference tournament.

"It's on the team to dig deep and come through," said Associate Head Coach Cat Heifner. "Our offense believes in itself… and they know what they're capable of and I was excited to see them come through."

OPENING ROUND
With their season on the line, the Aggies sent Jordin King to the circle to start things off. After a pair of scoreless innings in which King allowed no hits, the Aggies broke the seal.

In the top of the third, Jayleen Burton  got aboard via a leadoff single before Jillian Taylor  stretched out to hit an opposite-field home run and give the Aggies a 2-0 lead over the Bearkats.

Sam Houston responded with a home run of its own as Emily Telg also hit one over the left field wall to bring the 'Kats to within one run.

The Aggies' Burton came through from the nine spot for the Aggies once again in the fourth as she hit a single to the shortstop with Paige Knight  standing on first and Hailey Tanori  standing on third. The sophomore's second hit of the day brought in Tanori and returned the Aggie lead to two runs (3-1).

The host school would then match the Aggies' production from the third inning as they plated two in the bottom half of the fourth inning – tying the game at three.

The fourth inning would also be when Laurali Patane  would take over for fellow freshman Jordin King  in the circle. With the Aggies already facing some adversity as Head Coach, and pitch-caller, Kathy Rodolph  could not attend the game due to an illness, the job of finishing off the game fell on the shoulders of freshmen Patane and Hannah Lindsay. With Lindsay calling pitches from behind the plate, Patane gave up just two hits in 3.1 innings while recording her 41st strikeout of the season.

One of the 'Kats two hits in the final three innings came off the bat of Kylie Hobbs who hit an RBI double to right center in the bottom of the fifth to give the higher seeded Bearkats their first lead of the contest.

The Aggies were then able to move a runner into scoring position in the sixth, however, could not capitalize.

That capitalizing would have to wait until the Aggies' final at-bat of the game when they entered the seventh inning trailing by one run. With the end of the season looming, the top of the lineup was due up for the Aggies. The order included a pair of All-WAC honorees as Jillian Taylor began the inning on deck and Ramsay Lopez waited in the hole. Taylor utilized her plate appearance to single through the right side of the infield and, ultimately, represent the tying run.

With Taylor looking on from first, the WAC's home run leader stepped into the batter's box. She would work the count full before fouling off a ball that was destined for home run territory had it stayed fair. On the very next pitch, Ramsay got ahold of another one and this time it would stay fair as it flew over the deepest part of the park – putting two runs on the board and keeping the Aggies' season alive.

Carrying a 5-4 lead, Patane and the Aggie defense worked through a three-up, three-down inning to secure the victory and advance to the next round of the WAC Tournament.

GAME TWO
Emerging with a win in the second game of the day would be a more difficult task as they drew Seattle U, an opponent that the Aggies had met in the previous two WAC Tournament title games in third-seeded.

Seattle U got the best of the Aggies in the regular-season series, but NM State was able to take a game from the Redhawks when they first met in Las Cruces, N.M., on April 8-9.

Nance had one of her better nights in the circle as the Aggies managed just one hit off of her and that came off a bunt in the very first at-bat of the game. In addition, the Aggie offense was unable to record a hit off reliever and WAC Freshman of the Year Grace Luderer.

Aggie leadoff Hailey Tanori  was the lone batter to reach on a hit while Paige Knight  got on board thanks to an error by the shortstop in the top of the fifth.

As she did in the opener, Laurali Patane would enter the game in the fourth inning with two away. Once again, she was efficient and controlled as she gave up just three hits and struck out two. Unfortunately, she took over at a point in the game in which the Aggies were trailing 7-0.

Eventually, Seattle U would score its eighth run of the night and bring an end to the game via the run rule in the sixth inning.

UP NEXT
Thanks to a win in the opening round, NM State earned its way into the double elimination portion of the WAC Tournament meaning that the loss to Seattle U does not mean the end of the Aggies' season. Instead, the Aggies will take on the loser of the matchup between Grand Canyon and Utah Valley that is scheduled for 10 a.m. on Thursday morning. Once the opponent has been determined, the two programs will battle with win-or-go-home stakes on the table at approximately 3 p.m. MT. Fans can watch the entire WAC Tournament on ESPN+ and can follow along with the Aggies on Twitter (@NMStateSoftball), Instagram (@NMStateSoftball) and Facebook (NM State Softball).