No cream puffs: Just Anteaters and stiff competition for NMSU 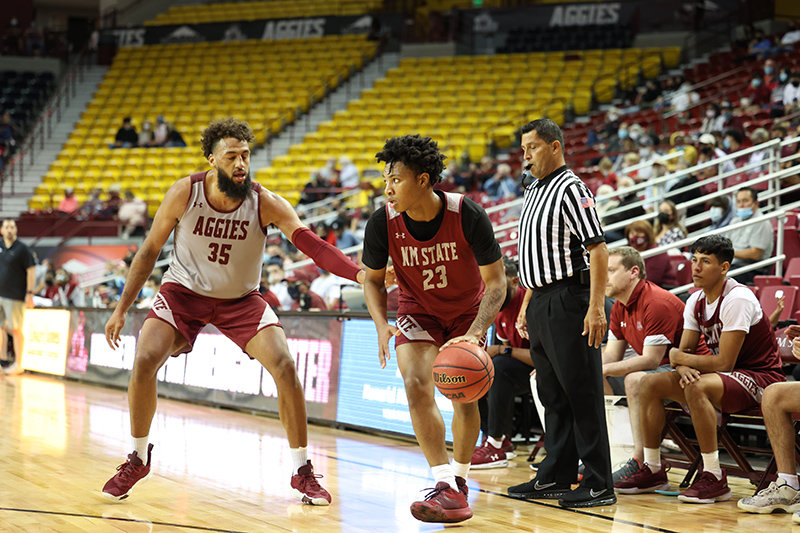 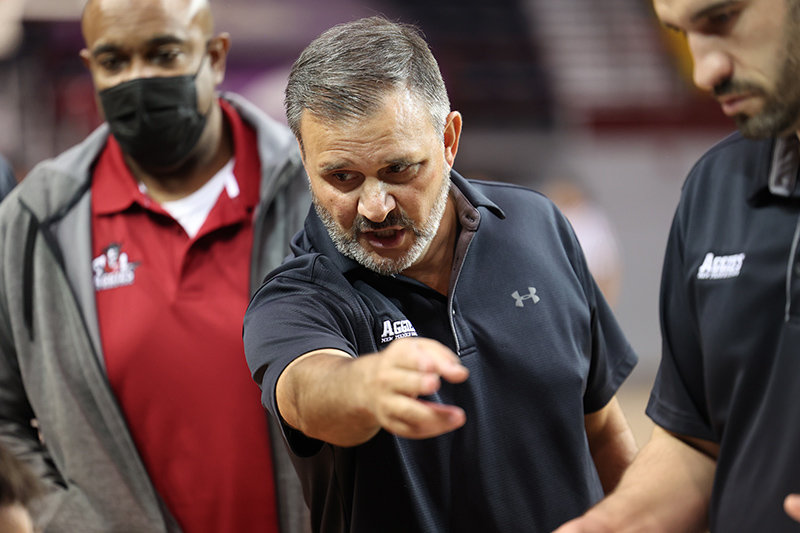 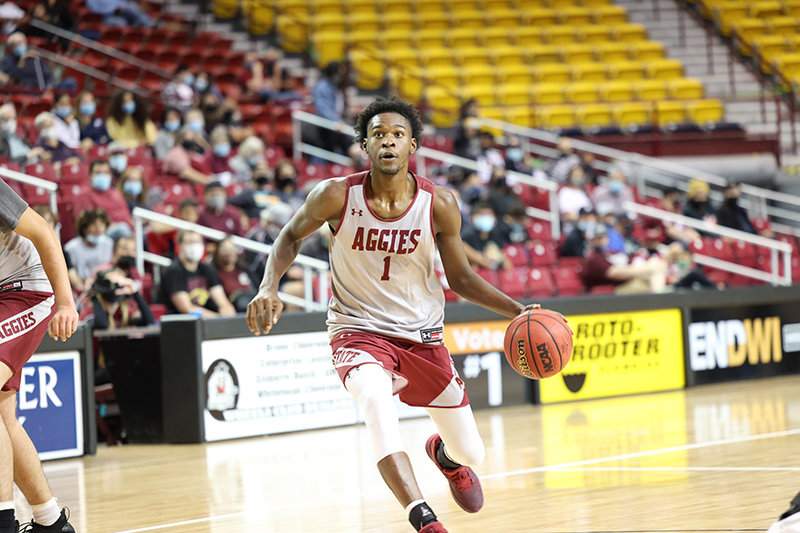 Marchelus Avery, a freshman from Richmond, Virginia, handles the ball during a scrimmage.
Photos courtesy of NMSU Athletics
Previous Next
Posted Friday, November 5, 2021 12:55 am
By Dave Burge

Cream puffs, patsies and schools with a “direction” in their name.

Those are often the type of opponents that college basketball programs choose to start off their seasons against.

But not the New Mexico State University men’s team.

Historically, the Aggies try to challenge themselves in the early part of the season so they are ready for the rigors of conference play and hopefully the NCAA tournament.

As Proverbs 27:17 says, “As iron sharpens iron, so shall one man sharpen another.”

“We have always believed in trying to play a challenging schedule, but it takes two to tango,” said NMSU men’s basketball coach Chris Jans.

The Aggies will open their season at 7 p.m. Tuesday, Nov. 9 against University of California-Irvine at the Pan American Center. It will be the first home game for NMSU since March 2020, because of the Covid pandemic.

“We are not easing into the season,” Jans said, noting that UC Irvine was 18-9 last year and has eight of its top 10 or 11 players returning.

“A couple of years ago, they won a game in the NCAA,” Jans said. “They are a respected program around the country.”

And they have one of the coolest nicknames in all of sports: the Anteaters.

The early part of the schedule won’t disappoint those who follow college basketball.

The Aggies will face I-10 rival UTEP at 7 p.m. Saturday, Nov. 13 at the Pan Am and then they are off to the Myrtle Beach (South Carolina) Invitational. At this made-for-ESPN event, the Aggies will face Davidson in the opening round on Nov. 18 and will play two more games in the tournament.

Jans called it an “unbelievable tournament against quality opponents” that will be shown on ESPN’s various networks.

The Aggies’ schedule in late November and into mid-December continues to be challenging with the following key matchups: a home game against in-state rival University of New Mexico on Tuesday, Nov. 30; a trip to El Paso to face UTEP on Friday, Dec. 3 at the Don Haskins Center; and a trip to Albuquerque to play the Lobos at The Pit on Monday, Dec. 6.

The Aggies will also have road game against Loyola Marymount on Saturday, Dec. 11 and Washington State on Wednesday, Dec. 15.

Of course, the Aggies do have a couple of games against “directional” schools mixed in the early season schedule.

But overall, it is a challegning slate of games that are meant to prepare the Aggies for the Western Athletic Conference season starting on Thursday, Dec. 30 at Seattle University.

“Our goals remain the same for every season we’ve entered since we’ve arrived and that is to win any championship they are potentially awarding, whether a regular season championship, a conference tournament championship or any type of in-season tournament,” Jans said.

And ultimately, the Aggies would like to “win games in March Madness,” Jans said.

“That’s the one thing we haven’t been able to accomplish (win a game in the NCAA tournament in Jans’ previous four years) and our fan base is starved for that,” Jans said.

Win or lose, Jans said his teams will play hard every night.

“When I first arrived, something I said to anyone who would listen: I want a product on the court when the fans leave, they won’t be kicking the can and complaining about lack of effort,” Jans said.

It should be a fun and competitive first two months of the season.