No obstacle is too great as Las Cruces’ Nathan Hidalgo becomes one of U.S.’s top endurance athletes 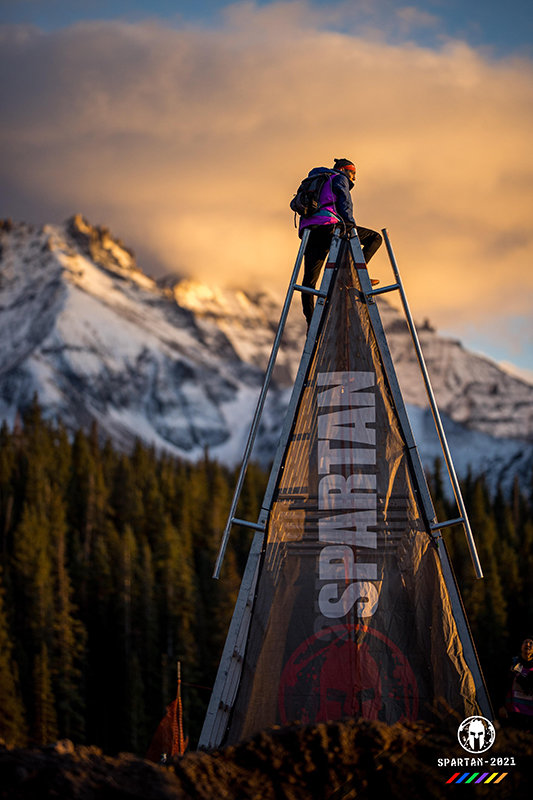 Nathan Hidalgo going over an obstacle called Stairway to Sparta in the Spartan Ultra World Championships in Telluride, Colorado in October.
Photos courtesy of Nathan Hidalgo 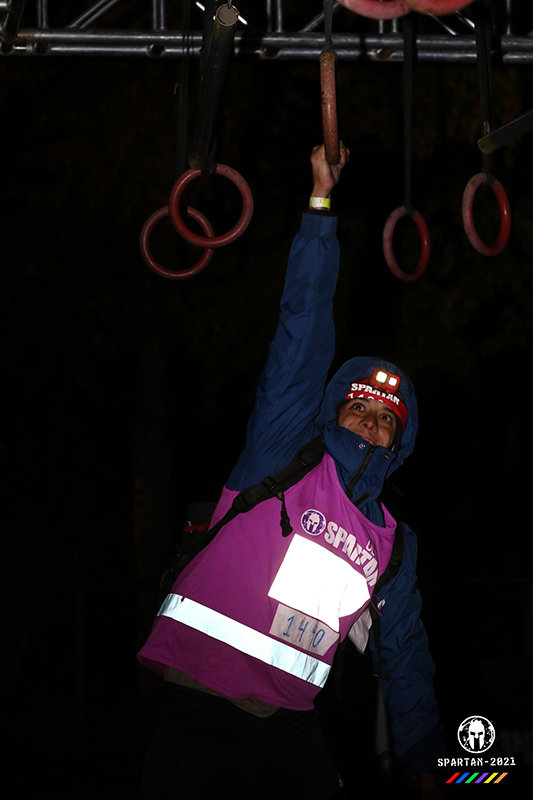 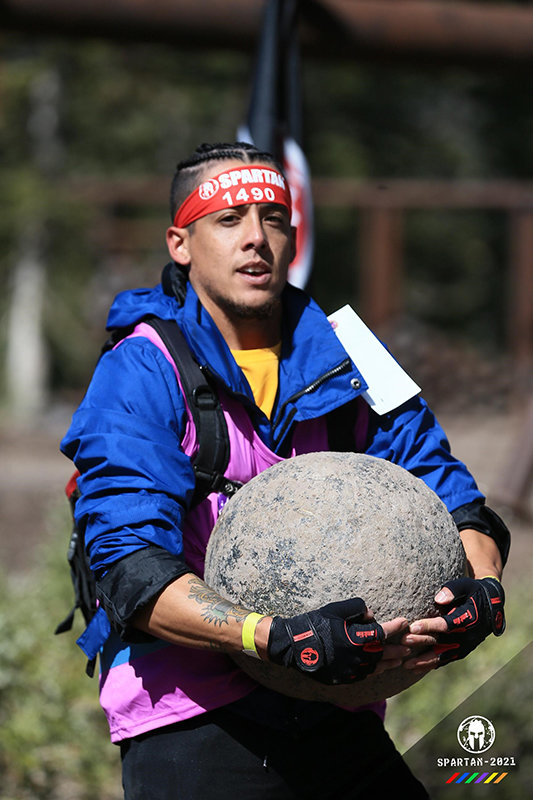 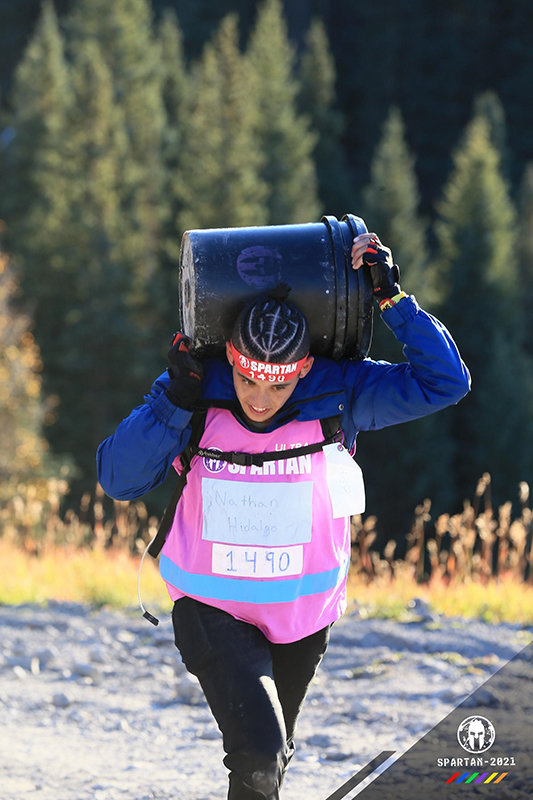 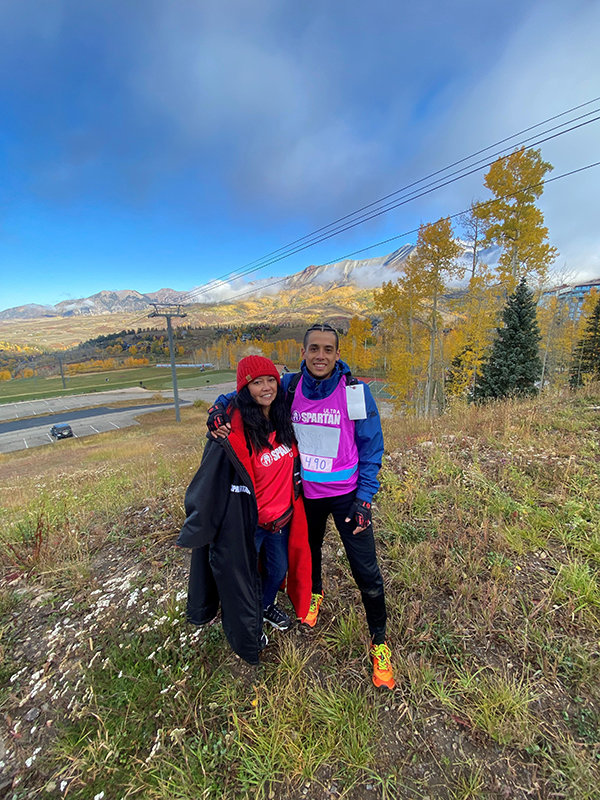 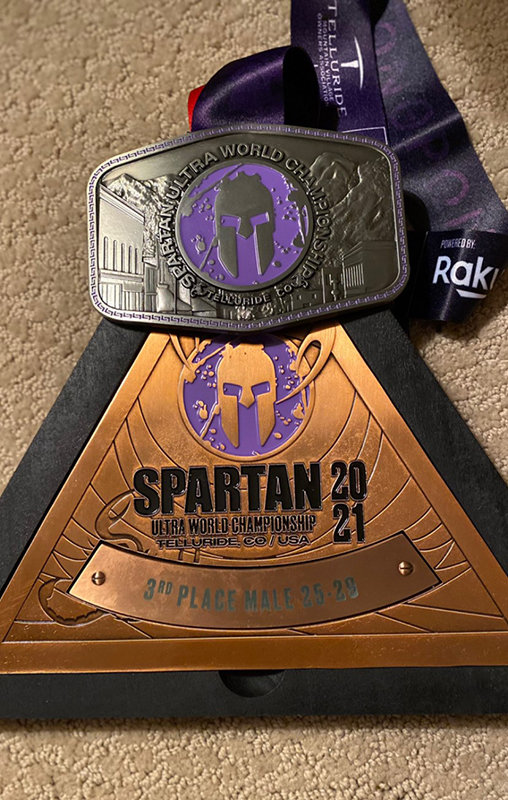 Medal won by Nathan Hidalgo for his third-place finish in the Spartan Ultra World Championships in Telluride, Colorado in October.
Photos courtesy of Nathan Hidalgo 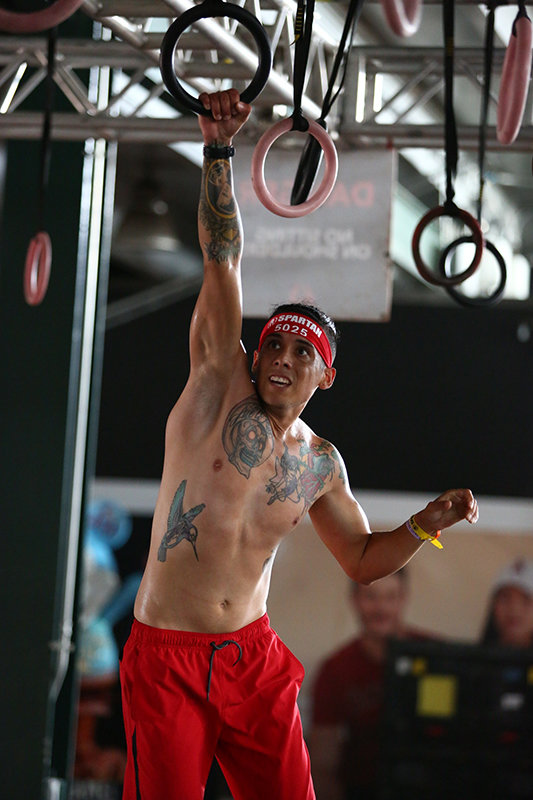 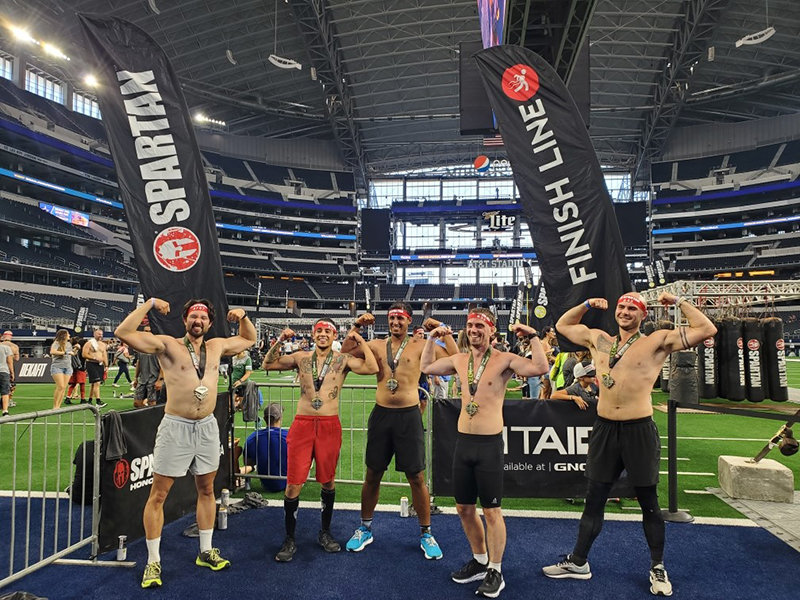 Nathan Hidalgo took first place in the Spartan Race event June 19, 2021, at AT&T Cowboys Stadium in Dallas. He is shown here with others who placed in the event.
Photos courtesy of Nathan Hidalgo 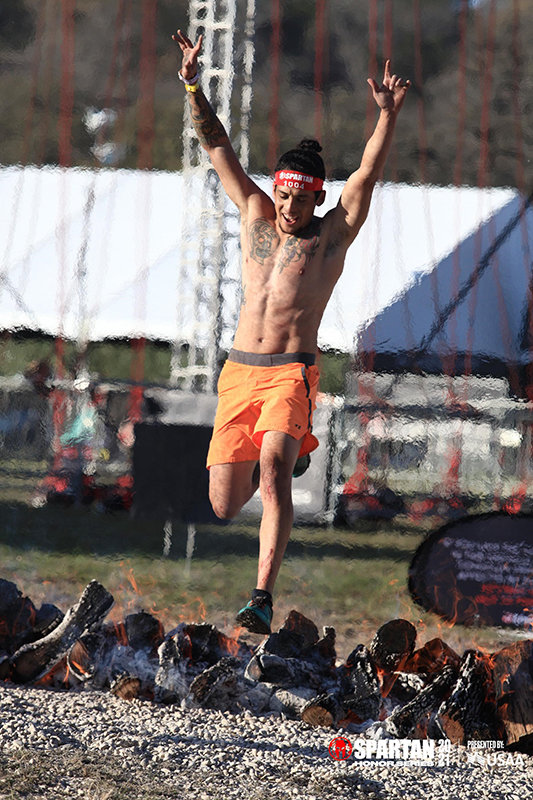 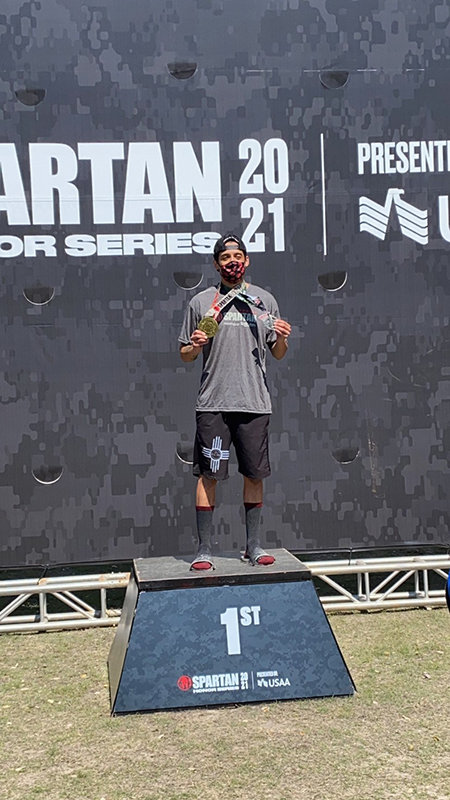 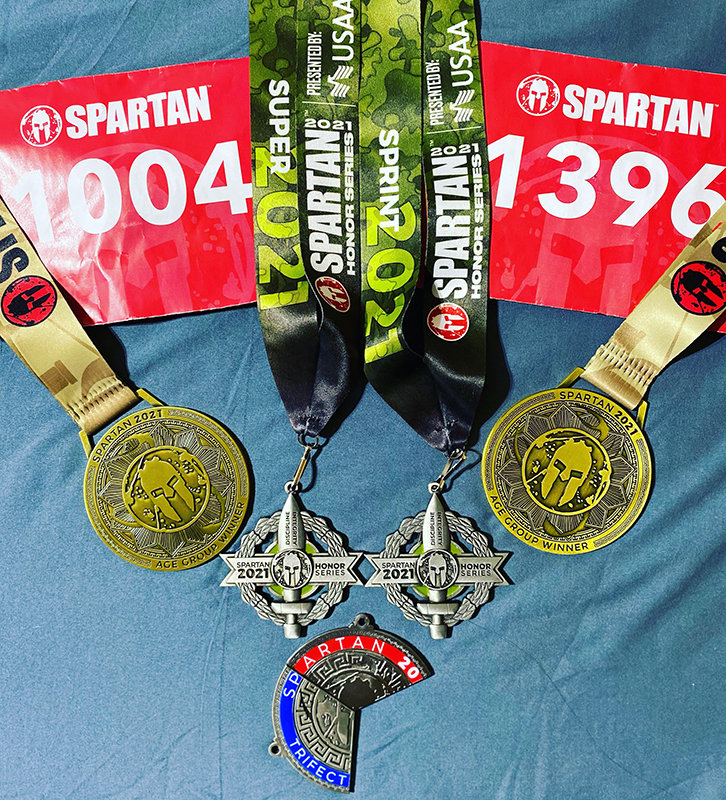 Nathan Hidalgo of Las Cruces is running, jumping, climbing and flipping his way to becoming one of the nation’s top endurance athletes.

Hidalgo played multiple sports and ran track at Mayfield High School. He continued running after his 2013 graduation and participated in his first obstacle-course run six or seven years ago at Burn Lake.

He works out several hours a day, seven days a week – including a daily run up and down A Mountain – and, with support from a close-knit family, raises money to compete in Spartan Race events in New Mexico, the region and across the United States. (Spartan Race is a series of obstacle races of different lengths and difficulty that have been franchised in the United States and 30 other countries around the world.)

“This is awesome,” Hidalgo remembers thinking after that strong finish. “I finally made it to the (awards) podium.”

He finished 15th in the 2019 Spartan North American Championship in West Virginia and continued to make his way toward the top tier of endurance athletes. Then the pandemic hit.

“I couldn’t do anything,” Hidalgo said.

Hidalgo also broke his right hand in 2020, so participating in Spartan Race events would have been impossible anyway, he said.

Hidalgo took first in two Spartan Race events – a “super” and a sprint – March 20-21, 2021, in San Antonio, Texas, an event that included the twister (a hanging-grip obstacle using a rotating bar with handles), a spear toss and a sprint.

“That was an amazing feeling,” he said.

Hidalgo spent part of the night in a tent on an obstacle course in the Colorado Spartan 24-Hour Ultra World Championship and Beast Race in Telluride, Oct. 10-11, finishing third as he ran 34 miles in 12 hours.

In his most recent competition, Hidalgo placed seventh in a six-mile Spartan Super Race that included 30 obstacles Nov. 6 in Fort McDowell, Arizona. The next day, during a three-mile Spartan sprint over the same court, Hidalgo finished in first place in his age group. (He turned 27 three days after the sprint.)

That first-place finish “solidified in me that I belong in this sport,” Hidalgo said. “Having some of the athletes I look up to come and tell me I need to move into the pro class now was amazing,” he said.

With races still to go before the year ends in California and Utah, Hidalgo is planning to make the jump fully into the professional class in 2022. His goal for the new year will be make it to the “elite” (Spartan Race pros) winner’s podium with consistent top-three finishes.

To build up his strength and endurance, Hidalgo started working out at a local gym and eventually built his own gym – his grandfather, Chris Hidalgo, bought new equipment for him – in the garage of the Doña Ana home he shares with his mother and grandparents. Hidalgo said he has also noticed dramatic improvements since going vegan last summer. He eats a lot of peanut butter and vegetables, Hidalgo said, and especially loves spinach.

“’You’re going to be Popeye now,’” his mother, Denise Sanchez told him.

Sanchez is his manager and chief motivator, Hidalgo said.

It was her encouragement, he said, that helped him finish the physically demanding Spartan in Colorado.

“’You didn’t come all this way to not finish,’” she told him.

Sending her child out into the cold and dark “was way harder on her than it was on me,” Hidalgo said.

His grandmother, Emma Hidalgo, makes burritos and enchilada plates and sells them to help Nathan pay for his travel expenses, a $1,000 Spartan Race season pass and his workout and race equipment, including running shoes that cost about $140 a pair.

His support network also includes his girlfriend, Bella Ramirez; his best friend, Aaron Carrasco (“He’s the one that pushes me,” Hidalgo said. “He’s always been there for me.”); and brothers Orlando and Santana Guerra, who “brought CrossFit (high intensity interval training) into my life a lot more,” Hidalgo said.

“Without them, I wouldn’t be able to do all this,” he said.

“I love what I do,” said Hidalgo, who works part time wrapping cars for Blackstar Creations in Las Cruces. “I’ve made so many friends.”

He plans to keep competing as an endurance athlete at least into his 50s – “if I take care of myself,” he said.