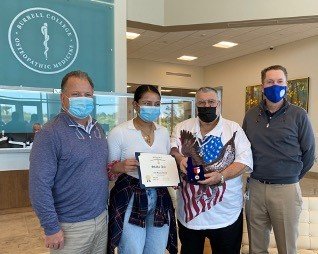 The Gadsden Chapter of the Sons of the American Revolution (SAR) in Las Cruces presented an SAR life- saving medal to Shaha Aziz of Las Cruces, SAR said in a news release.

Aziz, a student at Burrell College of Osteopathic Medicine, was driving home at approximately 6 p.m. Aug. 11 when she saw a man standing near the I-25 overpass at Cholla Road. The man was pacing back and forth near the edge of the I-25 overpass and appeared to be in emotional distress. Aziz stopped her car at the edge of the road and attempted to talk to the man. Eventually gaining the man’s trust, she provided her phone so that the man could call a relative. With more assurances on her part, Aziz was able to call the Las Cruces Police Department. A crisis intervention team was dispatched and the man was transported to Memorial Medical Center for evaluation.

“Not yet a doctor, Ms. Aziz has already saved a life,” SAR Gadsden Chapter President Don Williams said. SAR’s life-saving medal is presented to those individuals who have acted to save a human life without necessarily placing their own life or themselves in imminent danger, SAR said.

SAR was chartered by an Act of Congress in 1906 “to perpetuate the memory of the men who, by their services and sacrifices during the American Revolution, achieved the independence of the American people” and “to foster true patriotism.”

SAR is the largest male lineage organization in the United States, according to www.sar.org, and consists of 50 societies with more than 500 local chapters, several international societies and more than 34,000 members.