Summer program means interns are working across the county 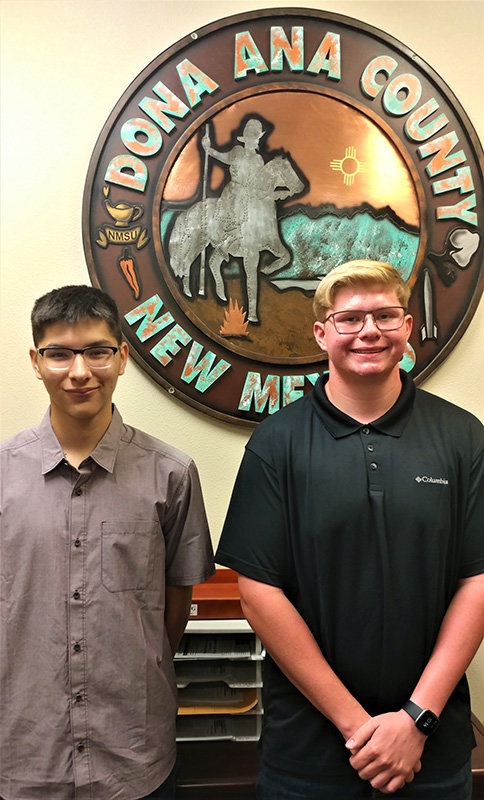 Mayfield High School junior Andrew Bleimeyer, 16, and New Mexico Tech student Andrew Jaramillo, 18, both of Las Cruces, are two of the more than 500 interns Doña Ana County has hired during the summer of 2021.

“Our goal through this internship is to expose our students to quality employment experience,” Skipper said. “The Andrews have been valuable to our department in such a short time. They both came in with interests in IT (information technology). Because of their willingness to learn new things, their view of IT has been expanded. They are learning the art of communication and its delivery in various forms. They are assisting with recording and editing video as well as creating their own content.”

At the County Government Building, Bleimeyer said he has interviewed other interns and the county’s internship program director, Margarita Porter, and also edited a video and worked on podcasts about the program.

Jaramillo also has worked on videos and on an app to help make it easier for 911 operators to locate callers. He also has helped with the county’s full-page ad in the Las Cruces Bulletin and with photography to update the county website, Jaramillo said.

Both Andrews have also worked on county public service announcements for radio stations.

Bleimeyer, who will graduate from Mayfield in 2023, wants to pursue a career as a physical therapist, a chiropractor or message therapist, and maybe work in sports medicine, he said. He’s also interested in becoming an auto mechanic because he likes fixing things.

“I want to help people get back to their lives,” Bleimeyer said. He is looking forward to doing some traveling, but likely will stay in New Mexico – possibly in the northern or central part of the state – once he begins a career. He enjoys track and field, playing soccer and doing yardwork at home.

Jaramillo said being a computer science major at New Mexico Tech offers him a “broad-spectrum career path.” He is particularly interested in working in server maintenance or as an IT manager. Jaramillo said he probably will stay in New Mexico when he graduates from Tech. Jaramillo said he likes playing video games and hanging out with his friends. He also has a computer at his grandparents’ house that he’s already taken apart and put back together. The hardest part of that hobby, he said, is “keeping track of the screws.”

The internship program has meant doing “something new every day,” Bleimeyer said.

“I’m glad I did it,” Jaramillo said. “I’ve been far more productive and learned way more than if I had stayed home all summer playing games.”

The county internship program was made possible because of a $1.3 million grant the county received from the New Mexico Public Education Department. Interns work a total of six weeks for school districts in the county, the City of Las Cruces, New Mexico State University, Doña Ana Community College, Burrell College of Osteopathic Medicine, Memorial Medical Center and other public entities, along with private businesses and nonprofits.

“Our goal with our interns was to give them skills they could take with them on their journey, and broaden their horizons for when they make educational and career choices,” Skipper said.

Leave these 6 phrases behind to sound more confident over email

Year of the quarterback carousel: A look back at the NFL's record number of starting quarterbacks in 2022

Where could pro sports expand next? 12 cities that are ripe for new teams