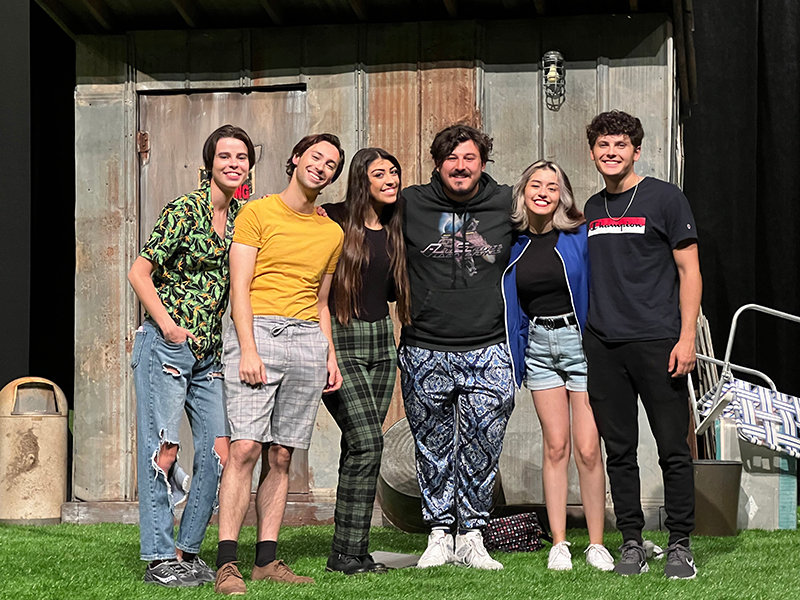 “I was thrilled by the production and so impressed by the brilliant work the students were doing,” playwright Dylan Guerra told me about New Mexico State University’s production of his new play, “Big Frog.”

I too was impressed by this outstanding cast of young actors and the space that director Nichole Hamilton gave them to create their characters individually and as a group of high school students who gather on a Miami golf course to smoke pot, drink and deal with their individual and collective traumas.

They find a blue frog that becomes something of a mascot, but things change dramatically when a dare is accepted and everyone in the group licks the frog. One of the five disappears and the other four gather 10 years later to discuss what they will reveal in an upcoming podcast about that unsolved mystery. The frog is still there and grows dramatically in importance to the story.

“Time is fluid in this play,” Guerra says at the start of the script. “Sometimes we will skip 10 years, sometimes minutes. This play is not about understanding. Lean in to the ridiculous.”

“The play’s structure is intriguing, the plot mysterious, and the style, well… quite the wild ride,” Hamilton said. “I found themes of cultural and generational trauma, addiction, sexual identity, isolation, and youth searching for an understanding of their past, present, future and how they tie together.”

Does licking the frog release a hallucinogenic, or is this colorful amphibian some sort of four-legged, croaking, deadly mystic?

The play has no intermission, and the simple but powerful set and costumes never change. The focus is on the actors and the story they tell, which hops like a frog from present to past to future.

Gold stars to every member of this cast, all of whom are NMSU theatre students. They come to the very edge of the stage, fearless and in one case, almost naked, with few props and set pieces and invite you to step into the universe they have created.

Like their characters, each actor is vital to this story. It is an ensemble cast with impressive energy and chemistry.

The actors got to meet the playwright – a rare gift for any actor – during his two-day visit to NMSU and talk to him in person about the play, which is having its first staged production at NMSU.

Bravos and gold stars to Jonathan Cordova, Isaac Goldstein, Alycia Herrera, Yocelin Torres and Elia Vasquez. They bring an impressive list of acting and directing credentials to this production, as you can tell from the depth they find in their characters and the intriguing tale they tell.

I wish I could say more about the frog, but that would give away the spectacular ending. The crew, including props and costume designer Chloe Cappuccilli and scenic designer and NMSU Theatre Department guest artist Tobias Harding, deserve big credit. And, I think, Elia Vasquez deserves an extra and very special acting credit.