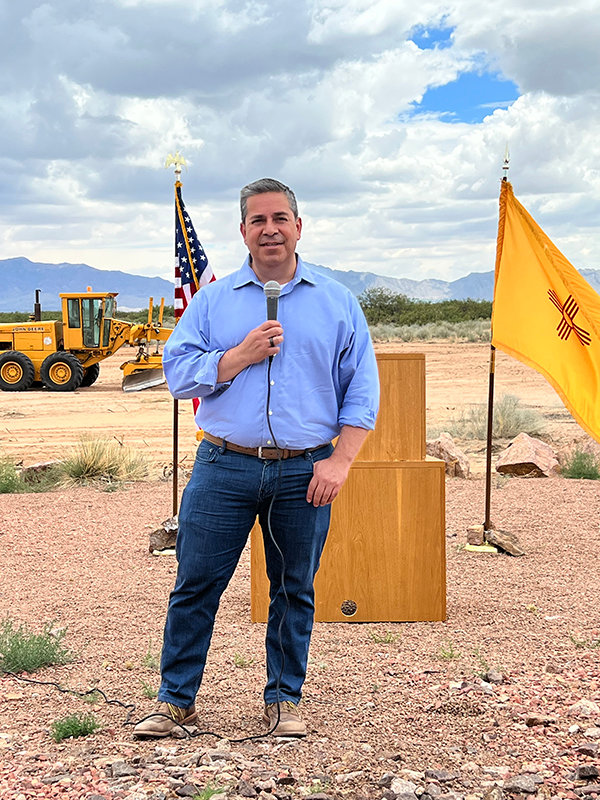 “With the investment by both federal and state governments, the Santa Teresa Jetport is poised to become a regional player in logistics,” said Jerry Pacheco, president of the Border Industrial Association. “The new investment will help the region attract strong investment and good-paying jobs.”

Federal support for the jetport “has been fantastic,” said Doña Ana County Commissioner Shannon Reynolds. With “this kind of support and partnerships,” the Santa Teresa Port of Entry has the potential to become the busiest border crossing on the entire United States-Mexico border.

“So many good things are happening in the area around Santa Teresa,” Heinrich said at the groundbreaking. “I’m really excited not only about these hangars, but really how they’re just an indication of so many great things to come. If you just look at the growth that we’re seeing here, the tens of billions of dollars of activities through this port of entry … we are like are no other place along the southern border,” Heinrich said.

Santa Teresa is bringing “more and more recognition to the power of this crossing,” Luján said. “This border crossing is being talked about at a very grand scale.”

Heinrich and Luján also visited Berino, New Mexico, “to highlight how the Infrastructure Law will deliver critical funding for water and sewer improvements for New Mexico’s colonias,” according to a news release from Heinrich’s office.

Heinrich and Luján also met with officials from the U.S. Department of Agriculture Rural Development and members of the Lower Rio Grande Public Water Works Authority during their visit to southern Doña Ana County.