With no opponent in November, chief deputy will become new DA 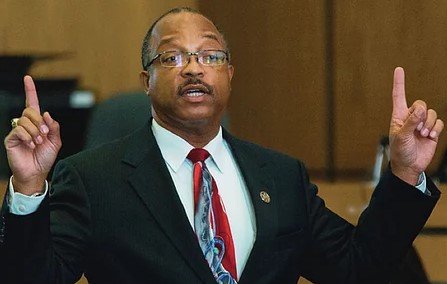 Gerald Byers’ first run for public office could not have gone much better.

Byers had no opponent in the June Democratic Primary for district attorney in the state’s Third Judicial District (Doña Ana County), and he has no Republican opponent in the November General Election.

“I’m quite pleased and honored and surprised,” Byers said, acknowledging that, with his swearing in Jan. 1, he is accepting “a very challenging position.”

Byers joined the Third Judicial Attorney’s Office (TJDA) office in 2013 and has been chief deputy DA for the past three-plus years.

“I thought it was time,” Byers said of his decision to run after incumbent Democrat Mark D’Antonio decided not to seek re-election to a third four-year term.

“I had really worked hard to establish a firm foundation as a prosecutor,” Byers said. “This is a community I had come to love. We set our roots here. Las Cruces has been very good to us. I want to do the best I can to serve people.”

Byers has 23 years’ experience as a prosecutor in New Mexico in Gallup, Albuquerque, Lordsburg, Deming and Las Cruces, as well as in Texas.

“I just really love the work,” he said.

“As long as you’re honest and true to yourself and others, it works,” Byers said. “That’s sort of been my motto everywhere I go, and especially now. With what’s going on on the national scene, I think people are expecting integrity in government leadership, and they deserve it. Sometimes we have to make decisions as leaders that are not comfortable and easy, but as long as the decision-making process comes with dignity, respect and understanding, people can understand where you’re coming from.”

Byers said it would be “somewhat presumptuous” to think that the only way someone could understand the nation’s social and political unrest “is if they happen to be African American. And that’s not true,” he said.

Looking at images of people protesting around the world, he said, “you see anglo people, African American people, people of all different backgrounds. The single thread that’s galvanizing” them, he said, is “respecting each other’s humanity. That’s what people deserve, that’s what people expect.”

“I was a little kid in the ‘60s and ‘70s and seeing this is sort of Déjà vu,” he said. “It provides an opportunity for the best of America to come forward. “All of the things that fed into what we take for granted now were birthed by the best of America. Give some people a chance, and they’ll knock the ball out of the park.”

The number of women in leadership positions is unprecedented,” Byers said, and so is “the number of minorities who hold positions of responsibility. Anybody can do it. You just have to have the door open.”

“I don’t hesitate that I can function as a district attorney in New Mexico,” Byers said, noting that he will be the first African American DA in the state.

“Race is not an issue,” he said. There are other people of color in leadership positions throughout the state, Byers said, and “there’s no special spotlight shined on them. The reality I keep coming back to is that same thing: It’s about respecting people.”

As DA, Byers said he will focus on “having a robust relationship with all aspects of the criminal justice system, including the courts, law-enforcement agencies, scientists and the medical community.”

“I really appreciate the initiative put forward by the city and county to improve mental health services,” he said. “People who have a mental disease deserve to have treatment as opposed to being put in jail.”

The DA’s office is “very fortunate to have an excellent staff and outstanding attorneys who are very capable and very energetic and really want to do the work of the people,” Byers said. “The focus needs to be on the service we provide to … members of the community,” he said, including regular contact with victims and witnesses. And, while the process must be efficient and effective, he said, “it’s in everyone’s best interest not to rush to judgement.”

Sometimes, the community is best served if a particular individual isn’t prosecuted for a crime, Byers said, but instead put in a diversionary program and given a chance to “get on their feet and not be knocked down by life. The reality is that there are a lot of people in society who have been through the school of hard knocks. Sometimes the criminal justice system may find somebody at the worst point in their life. We can all use a little mercy at some times.”

At the same time, he said, if the DA is “handed a case with just heinous, outrageous facts,” his office has a duty to make sure the individual charged “can’t harm anyone else in the community.”

It’s a “tough balance,” Byers said, and reflective of the decisions the DA has to make on a daily basis.

“At the end of the day, it’s not about us, it’s about what we have to do to secure justice for the people. That’s all the people,” Byers said.

“I’m not so much a politician as I am a prosecutor,” Byers said.

Byers’ father was in the U.S. Air Force, including service overseas. Byers was born in Germany. His father retired in Wichita Falls, Texas, where Byers graduated from high school in 1976.

Byers graduated from the U.S. Naval Academy in 1980, according to www.geraldbyersda.com. He was later deployed as a member of a multinational peacekeeping force in Beirut from 1983-84.

Byers and his wife of 37 years, Jackie Perez Byers, have two daughters and six grandchildren. They are active members of St. Genevieve Roman Catholic Church. In his spare time, Byers said he enjoys shooting sports and playing with the family’s three dogs..